The End of Bitcoin?

Since the MTGox bankruptcy Bitcoin was unable to sustain its elevated levels. Many traders insist the cryptocurrency is still the future of our generation, sadly, the weekly chart begs to differ.

Note we are launching our own Bitcoin trade alerts for global traders. More info is available in our trade alerts packages 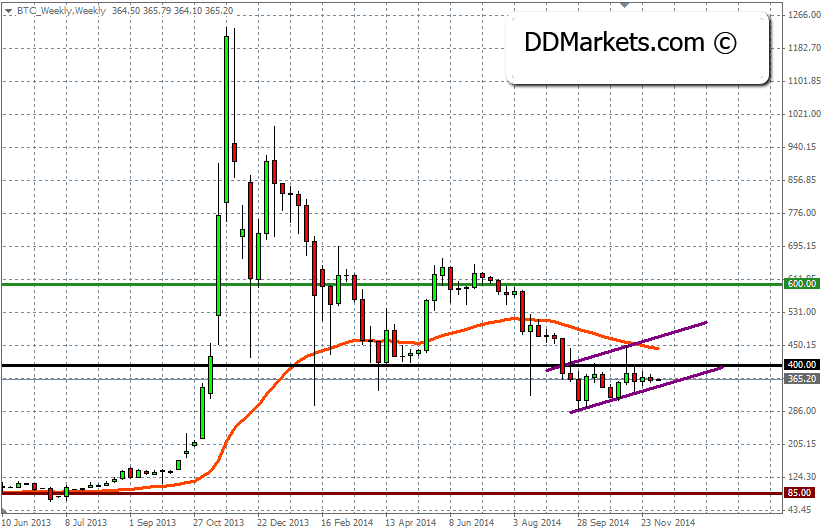 Following the heavy selling that began in August 2014, Bitcoin has painted a classic continuation pattern known as a ‘bearish flag,’ The flag suggests a resumption of the downtrend should the lower purple line will be taken out by the market, meaning, if the weekly candlestick closes below the lower purple line the resumption of the selling will be confirmed. By measuring the flag pole, a confirmation of the flag means Bitcoin may target $85 within the first quarter of 2015. Naturally, like any other market, the downtrend will be smeared with corrective gains that may allow Bitcoin traders to exercise sell-on-dips strategies.

Another warning signal to Bitcoin traders is the ‘shooting star’ reversal pattern that formed at the beginning of November, 2014. Although it is insufficient to provide an entry for selling, it serves as a clear warning to the market bulls.

The flag has not been confirmed at the time of this writing but from our trading experience the odds favour a break below the supportive price, which may then catalyse the selling in BTC/USD.

To negate the bearish outlook for Bitcoin, the price must first post a weekly close above $400.  The next step would be for Bitcoin to close above the upper purple line, which will then invalidate the $85 projection for 2015. Under such circumstances, Bitcoin would then expect to reach near $600 within the first quarter of 2015. The orange line is the 44-Weekly Moving Average (WMA), another obstacle Bitcoin would have to pierce through in order to negate our projection for Bitcoin, $85.

From a fundamental angle, the lack of Bitcoin to uplift itself to other markets means a peak has been made. Adopting the cryptocurrency to Minecraft games is not the path to the lost glory of the currency. Credit card companies such as MasterCard and banks are retaliating to any demand for Bitcoin and we have not seen anything extraordinary that can jumpstart current levels to over $1,000.  The only event we can conjure that may trigger a demand for Bitcoin is a financial crisis, which will remind traders the existence and values of a decentralized currency. If you are following the economic news, such an event may be occur in Greece. The country requires an additional credit line of EUR 10 billion to pay its debts, which is at the time of this writing may not be approved by EU as we have elaborated on in the weekly update.

If the crisis in Greece will escalate, it may trigger a global tension in the market. If the banking system will be affected as we suspect, perhaps then there will be some hope for Bitcoin. We highlight there is no clear direction in Bitcoin weekly chart until the price confirms the flag or breaks above the upper purple line to invalidate the continuation pattern. In our views, there is a greater chance for the bearish flag to materialize.

09/12/14 UPDATE: As we have anticipated, moderate selling was noted in Bitcoin (BTC/USD) as the market is now testing the support level we have mentioned in our analysis (lower purple line). 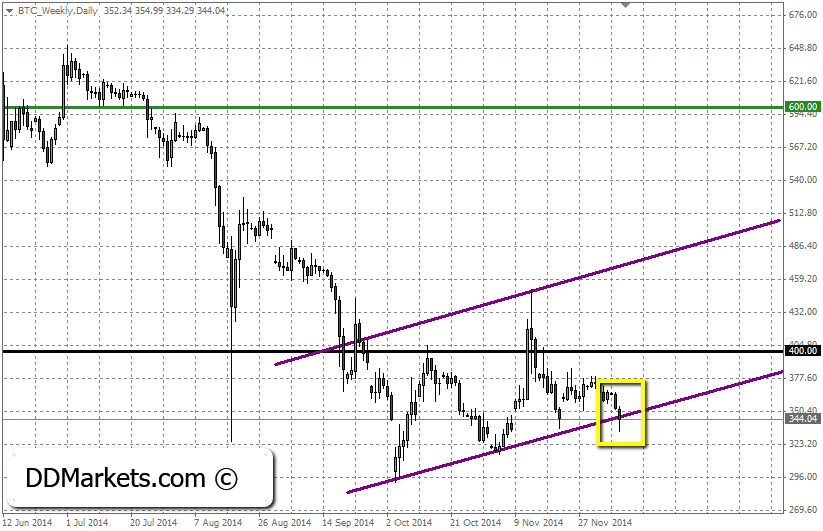 A weekly close below the support may affirm the bearish flag, which could yield to further losses in Bitcoin. We will continue to monitor the chart and post updates when found relevant.

11/12/14 UPDATE: News that Microsoft is now accepting Bitcoin (only in the US at the moment) created a bullish spike in BTC/USD, driving the price above the support level. Although the news have lifted the price higher we will wait have to wait and see what the market will do after digesting the news. The weekly close may determine the medium-term trend for Bitcoin, A close above the support may yield to further gains while a close below may affirm the expected downtrend.

16/12/14 UPDATE: Bitcoin closed below its weekly support but not as firm as we would have liked to. However, current weakness in Bitcoin suggests the bearish flag may have been confirmed as we have expected when the price was over $370.

19/12/14 UDATE: Bitcoin is trading at $307 at the time of this writing, completing a fall of 20% (approx.) since the analysis was issued. An intraday support is noted at $300 although the key level that may trigger the next leg of moderate selling is a firm break below $290. We will continue to monitor BTC/USD and post updates when found relevant.

23/12/14 UPDATE: Bitcoin found comfort at $300 support, trading at $325 at the time of this writing. We observed the daily chart to determine the next resistance levels that may be capitalized by re-joining the medium-term downtrend that is expected from the weekly chart. 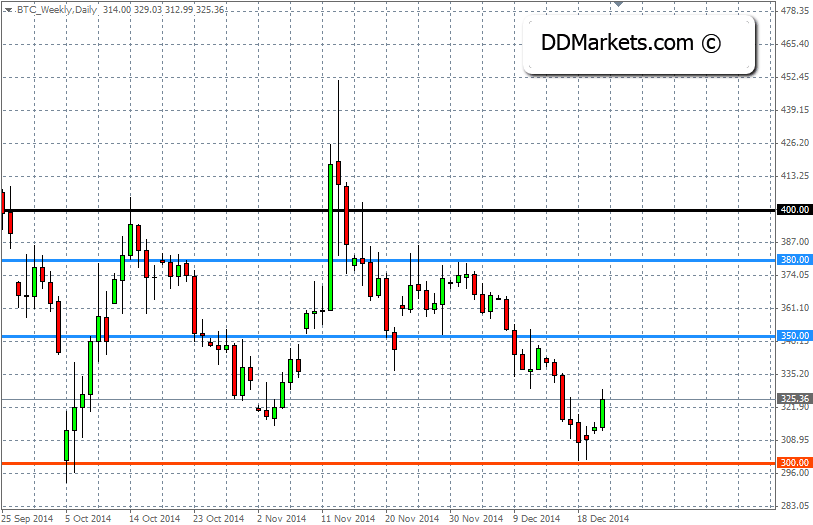 Should Bitcoin test $350 and fail to post a daily close above, it may signal the end of the rally and a retracement towards $300 is due. The latter resistance lies at $380 (50.0% Fibonacci), which is expected to act a firm resistance should Bitcoin break above $350. Likewise, if $380 is tested by the market and unable to post a daily close above, heavy selling are likely to emerge, targeting $300.

We repeat that a firm break below $290 will initiate another leg of heavy selling in Bitcoin. We will continue updating this page when found relevant, You may subscribe to be instantly notified when an update is released. In the Altcoins market, we have released what alternative currency  we believe has a strong possibility of becoming the  next Bitcoin

Note: We are soon launching intraday trade alerts in binary options and for Bitcoin.  You are welcome to pre-register as it will be free for a limited period of time.

13/01/15 UPDATE: Bitcoin (BTC/USD) is trading at $223.50 at the time of this writing, inline with our trading strategy for the cryptocurrency. 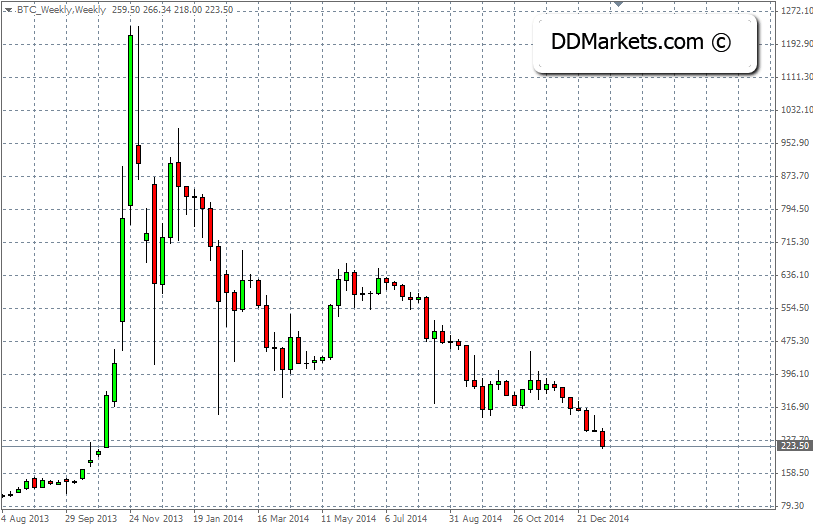 As the price broke below $290 as we clarified on the 23/12/14 update the weakness was technically inevitable. We will continue to monitor Bitcoin’s price and post updates when relevant.

27/01/15 UPDATE: We attribute the recent gains in Bitcoin to ‘Silk Road Reloaded’ that was launched not long ago in the i2p network. The bearish path got the cryptocurrency has yet to be invalidated.

18/02/15 UPDATE: We are launching Bitcoin trade alerts for global traders. Please view our selected trade alerts packages for further details if you wish to receive the trade alerts.