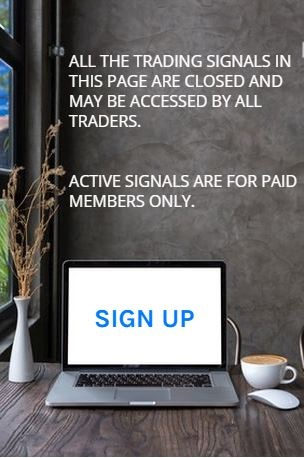 Theresa May confirmed the European Union (EU) rejected her brexit plan without offering an explanation. Theresa May asked for an alternative or the UK may exit the EU without a trade deal. An emergency meeting (which was priced-in until EU Barnier’s recent remarks) is expected to be held in mid November,

It has been reported over the weekend Theresa May may announce snap elections in as early as November. Snap elections prior to the end of 2018 may have significant repercussions, particularly on GBP pairs and crosses.

When Theresa May announced snap elections not long ago it was officially denied by her approximately 30 days before announcing the general elections’ date. The interesting question is whether snap elections can kick GBP higher against a basket of currencies.

The trade tension between the United States and China may have eased but it is far from over. China has ended its negotiations with the US over the weekend. Although the Fed is expected to hike rates this week the trade war between the countries may reflect in the FOMC statement.

We will first begin with the Japanese yen (JPY). We are noting multiple entries across JPY pairs and crosses. Very similar to our recent AUDCHF signal we will only opt for one JPY pair/cross. 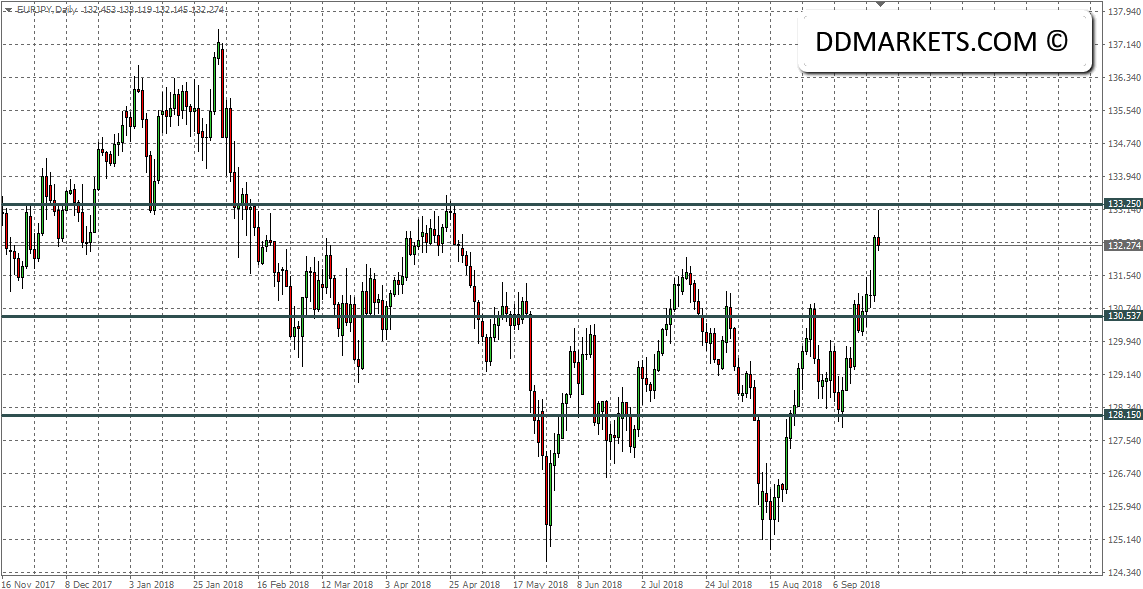 EURJPY will require to re-test the daily before we can enter the market. We may layer a sell limit order and initiate the trade on Monday should the price correct higher but falls short of triggering the order. As noted above there are multiple entries across JPY pairs and crosses, we selected EURJPY for a potential entry.

A firm Japanese yen often suggests safe-haven flows but it may also be related to the upcoming speech by the Bank of Japan Governor (Kuroda) later this week.

In regards to GBP, we have dismissed a short entry in GBPNZD (and EURNZD) as they were marked as feeble. GBPNZD broke above its weekly resistance, the recent weakness posted a re-test of the breached resistance (which is another reason why we avoided GBPNZD). 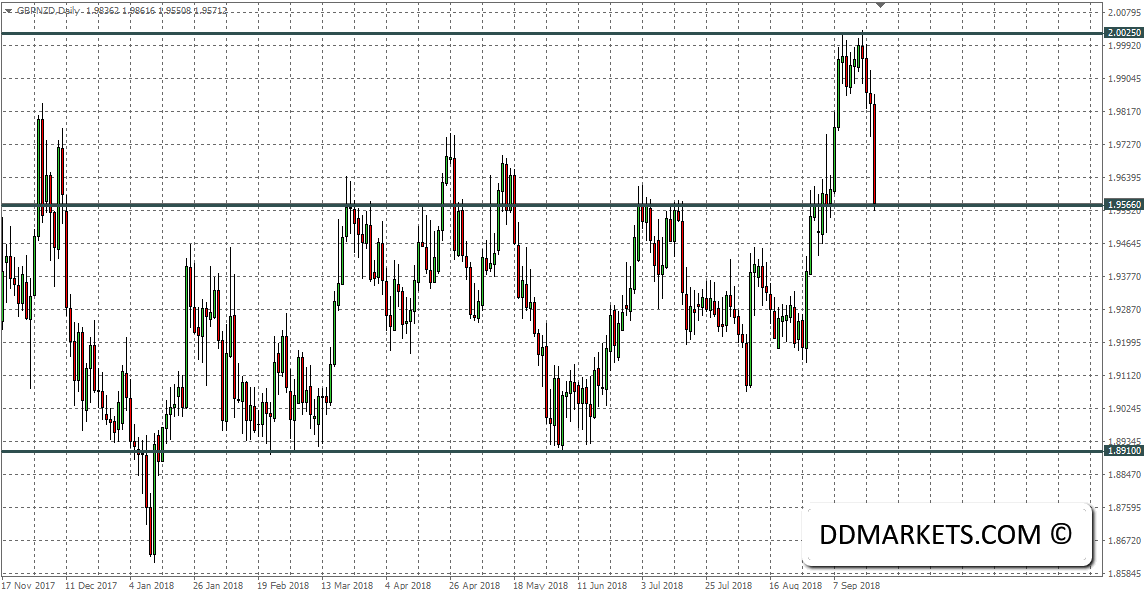 We are displaying GBPNZD daily chart but the entry is based on the weekly chart. The main concern with GBPNZD is the potential drawdown.

Had the re-test took 2 weeks to materialize it may have reduced the possibility of another leg lower throughout the week. The price is expected to gap higher at the time of this writing, which will increase the size of the protective stop.

The RBNZ monetary policy is due later this week. 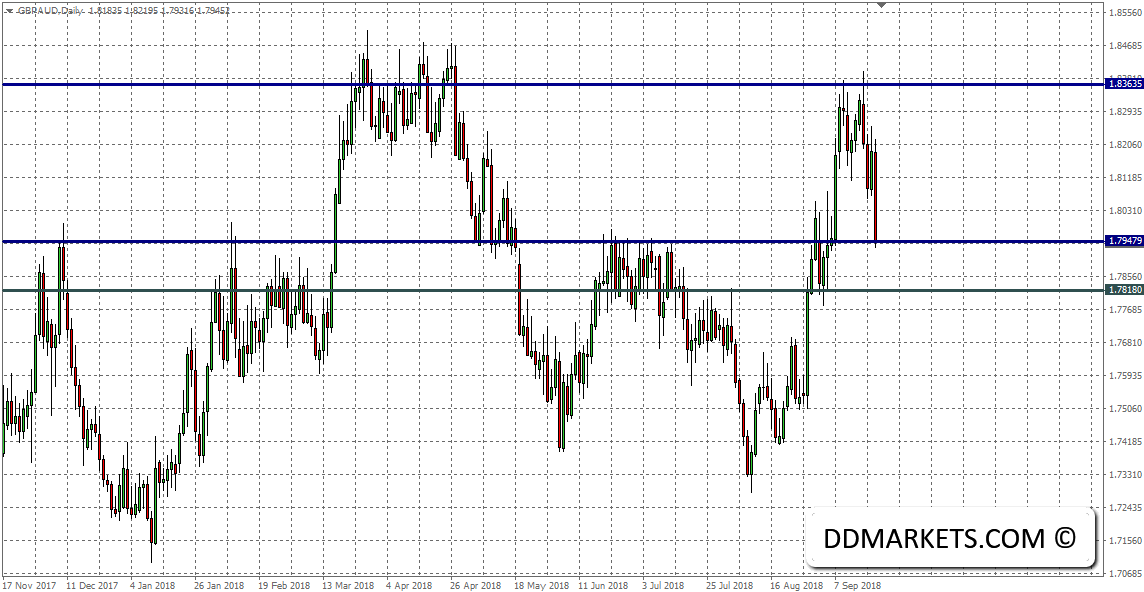 GBPAUD is a daily entry. Very similar to GBPNZD, the price closed on the daily support and is expected to gap higher at the time of this writing. We are uncertain we will opt for GBPAUD but it may suggest either a firm GBP or risk aversion that may weaken the commodity currencies. 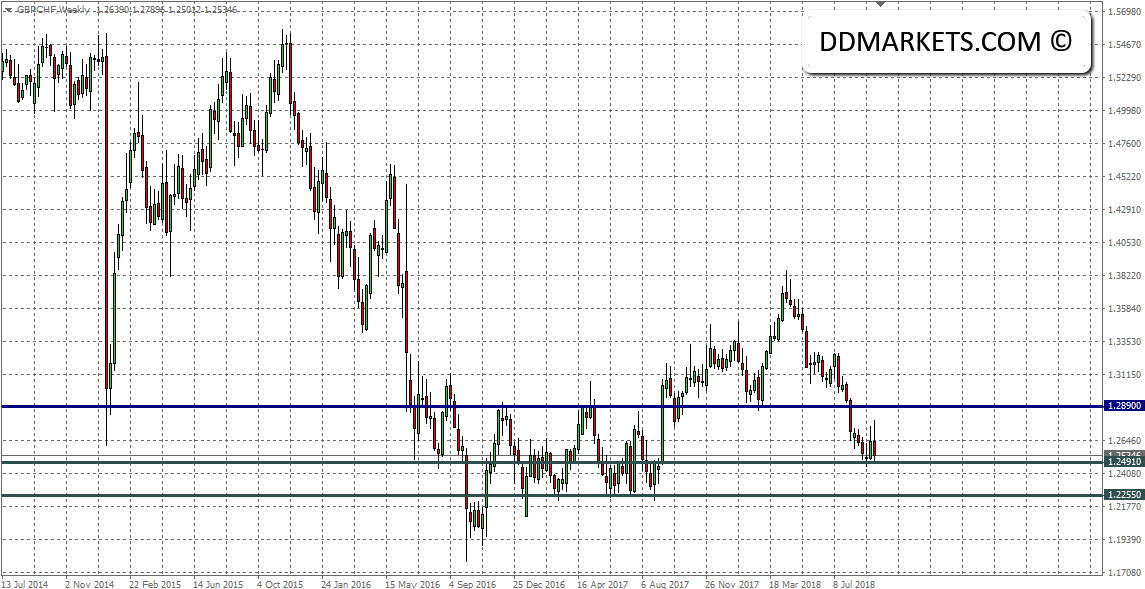 GBPCHF potential entry is similar to the entries we dismissed in EURNZD and GBPNZD. It is not what we like to refer to as a clean entry. The protective stop is tighter when compared to other GBP crosses. If the entry does kick into play the potential drawdown is minimal bearing in mind it is a weekly entry.

CHF does benefit from safe-haven flows. Should JPY strengthen on the back of a risk aversion CHF may follow suit. The only scenario where GBPCHF may correct higher is due to a firm GBP or an intervention by the Swiss National Bank (SNB).

We did discuss re-entering AUDCHF. The price did correct lower on Friday as we anticipated but rebounded off its lows prior to the weekly close. 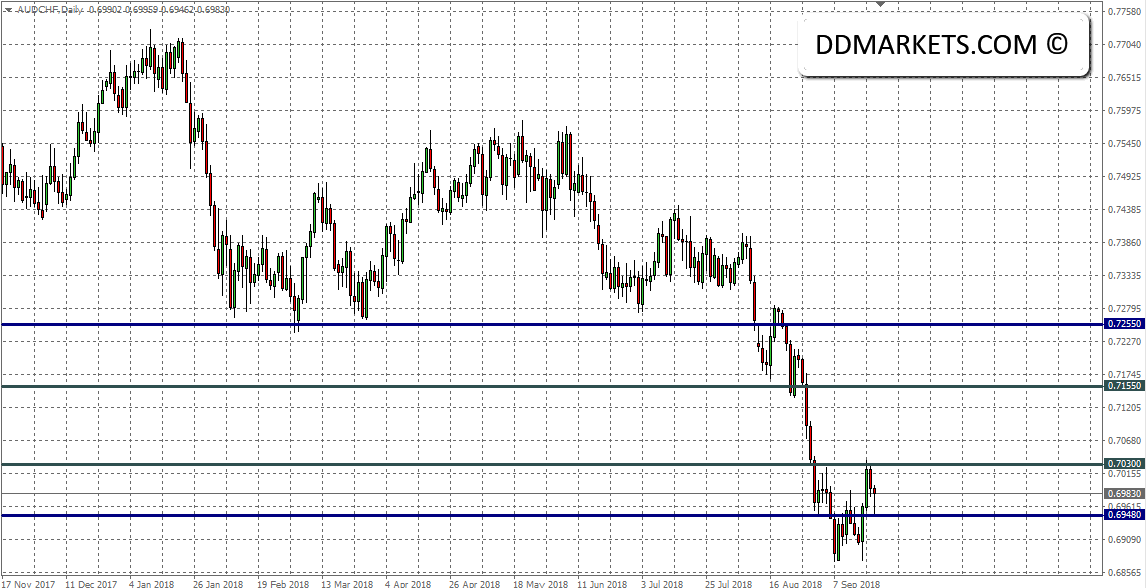 AUDCHF is expected to gap lower at the time of this writing. The gap may provide a long entry in AUDCHF. We are uncertain whether we will opt for both AUDCHF and GBPCHF. 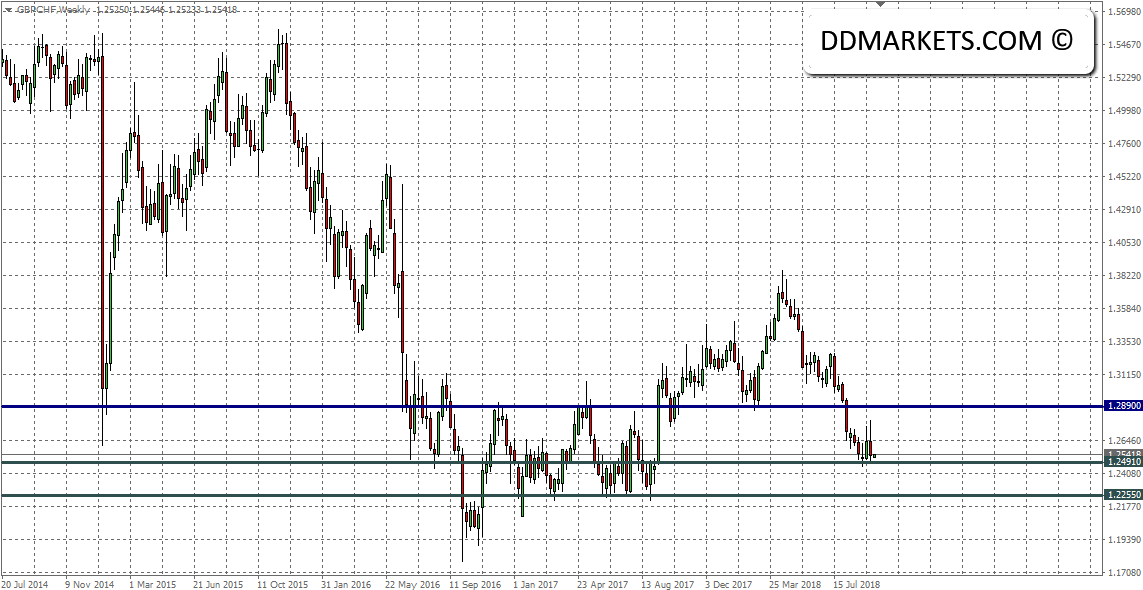 Note: Some risk are taken with the entry as discussed in the weekly update The potential drawdown is a re-test of 1.2398. We remind that this is a weekly entry, some drawdown cannot be prevented entirely. The price spiked higher prior to issuing the trade, which is disappointing but we are still opting for the entry despite some drawdown. 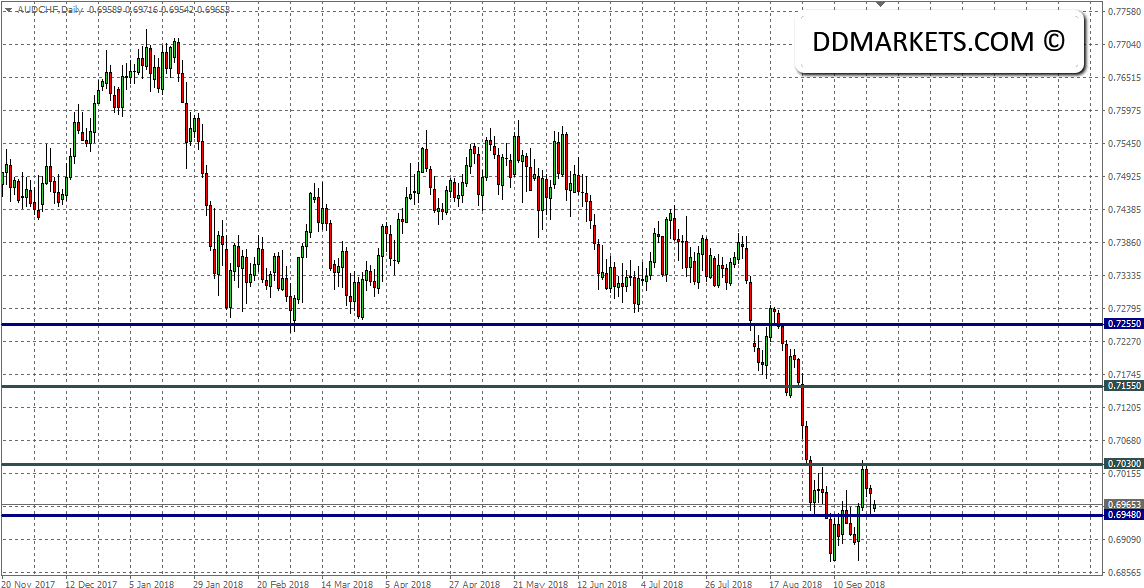 Note: The potential drawdown is a re-test of 0.6905. AUDCHF will increase our exposure to CHF 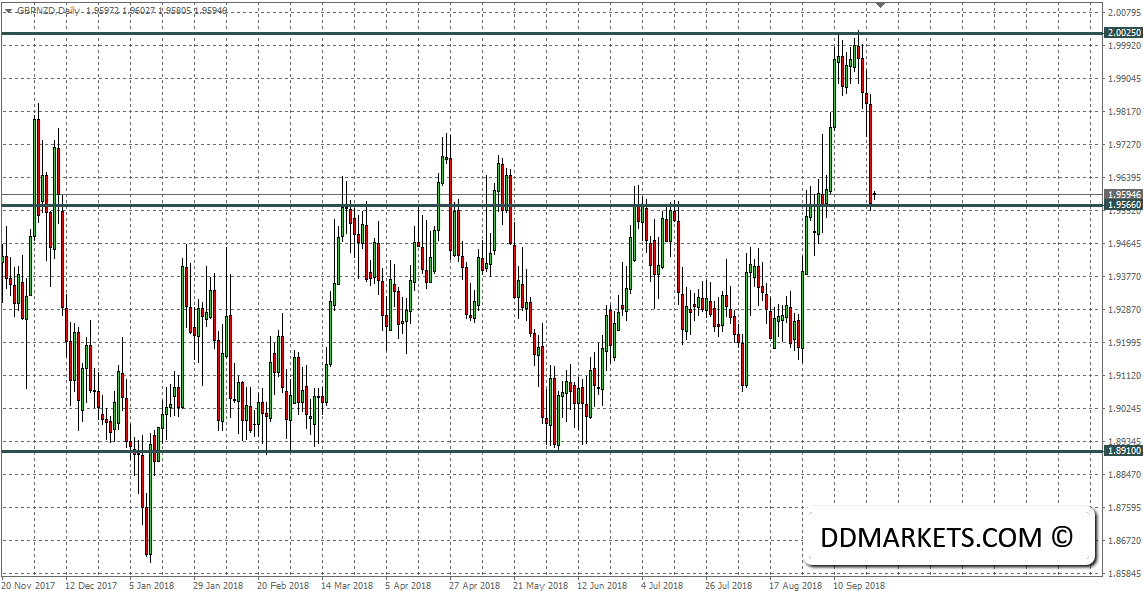 GBPNZD requires a protective stop of around 500 pips. What we are attempting is a much tighter stop while relying the weekly support will not be tested.

In such a scenario we expect GBPNZD to post moderate gains. This is a very high risk we are taking as we are laying a much tighter stop. The odds of the market triggering the stop is high but the potential profit outweighs the risk.

24/09/18 SIGNAL UPDATE: A UK cabinet meeting has been scheduled for 13:00 GMT. As a precaution we would like to downsize our exposure to GBP.

GBPCHF is trading at 1.2616 at the time of this writing, we are closing 10% of the long trade at market price.

GBPNZD is trading at 1.9721 at the time of this writing, we are closing 10% of the long trade at market price.

24/09/18 SIGNAL UPDATE II: Following today’s gains in GBPNZD we are noting the possibility of some retracement in the cross. We are unwilling to absorb the potential retracement. 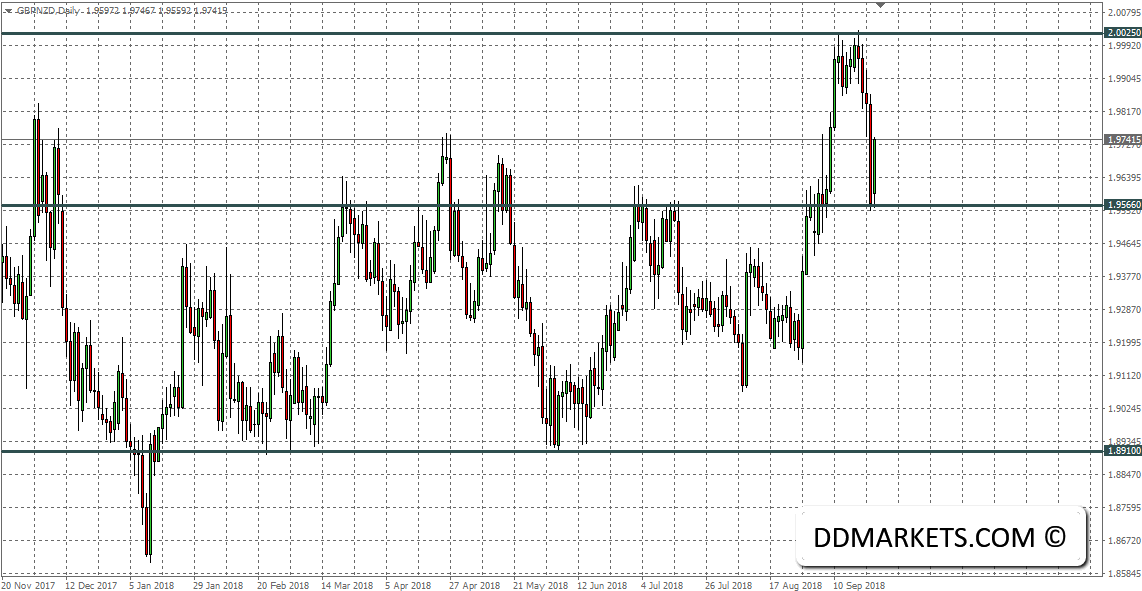 As some risks were taken in the trade and as we were not expecting these gains to materialize in less than 24 hours we decided to exit GBPNZD at market price (1.9737). We are remaining in GBPCHF as it is a weekly entry. 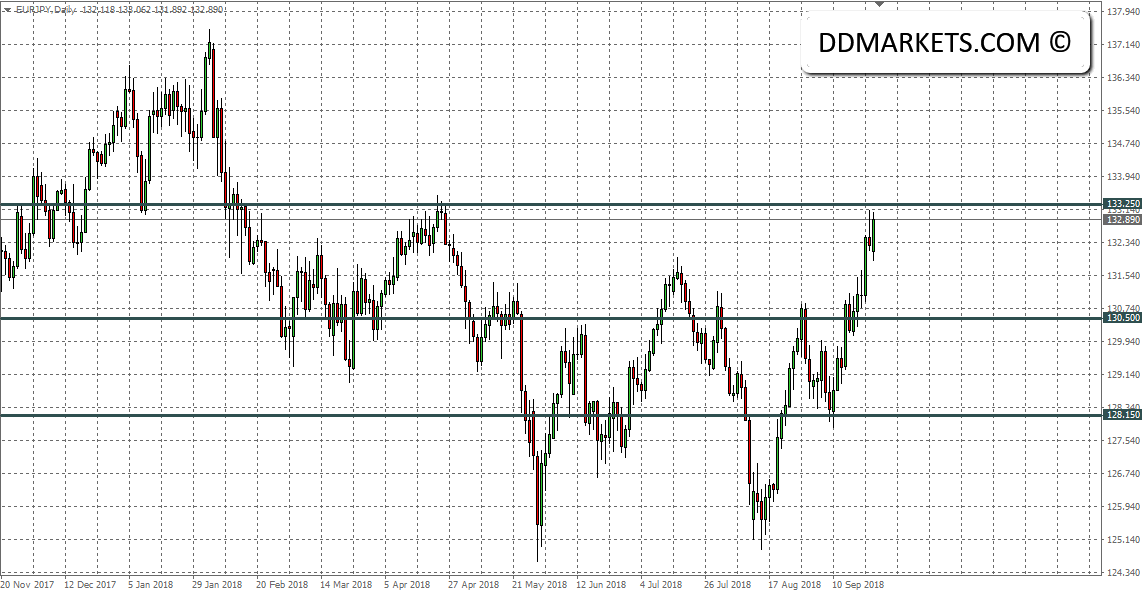 Note: The potential drawdown is a re-test of 133.45 This is a daily entry.

25/09/18 SIGNAL UPDATE: GBPCHF is reaching the daily neckline (reversed H&S). We cannot determine whether it will break the neckline without correcting lower.

The potential retracement is a re-test of 1.2600. We may have the ability to re-enter upon a daily close above the neckline but it greatly depends on the market. We cannot enter at any breakout. 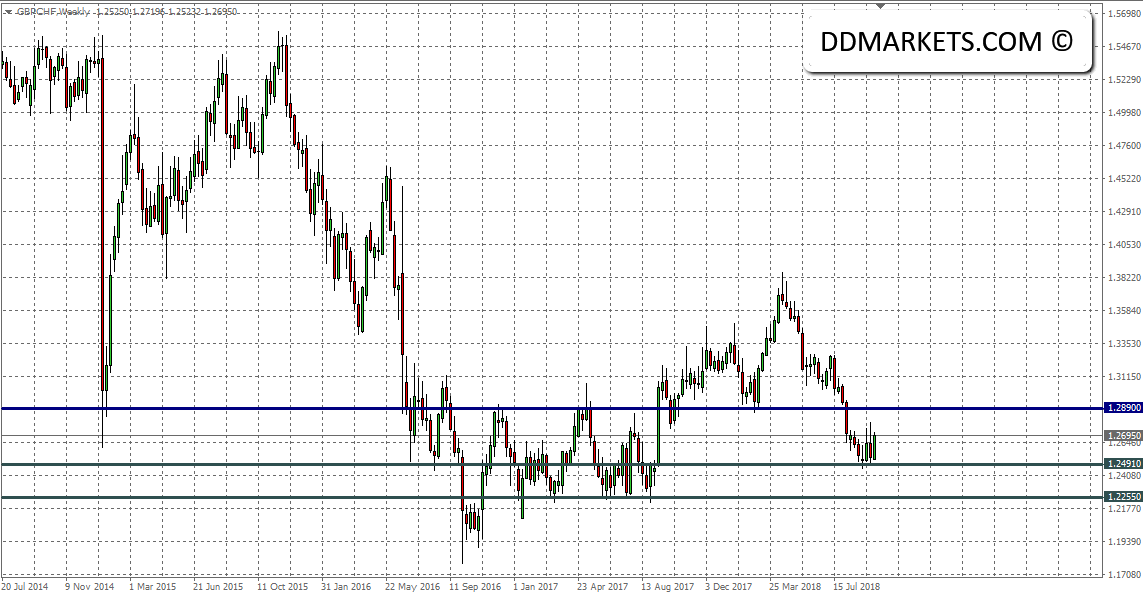 It is a fairly difficult decision but we decided to close GBPCHF long trade at market price (1.2695).

25/09/18 SIGNAL UPDATE: We are shifting AUDCHF protective stop to the entry.

26/09/18 SIGNAL UPDATE: We are shifting AUDCHF protective stop to 0.6983. We will be relatively close to the market but the stop must be shifted as it is a daily entry.

We are shifting EURJPY protective stop to 133.97. We can tighten further tighten the protective stop but would like to provide more room for the trade in an event the daily high is re-tested once again.

President Trump expressed his discontent with the recent rate hike. Canada’s Prime Minister affirmed a deal with the US (NAFTA) is not guaranteed, which sent CAD lower. We are monitoring CAD pairs and crosses.

Crude oil managed to recover off its lows as the US affirmed it will not tap the emergency reserves to contain crude oil’s price.

Italy’s 2019 budget has triggered some EUR weakness in today’s session. Our preliminary analysis suggests further EUR weakness but we will need more time to affirm our projection for the Euro.

28/09/18 SIGNAL UPDATE: Italy’s woes is weighting on the Euro at the time of this writing. What we may attempt to do is re-enter EURJPY should it correct higher. There is no guarantee such a retracement will materialize but we will try to maximize the potential profit as we have done in AUDCHF. 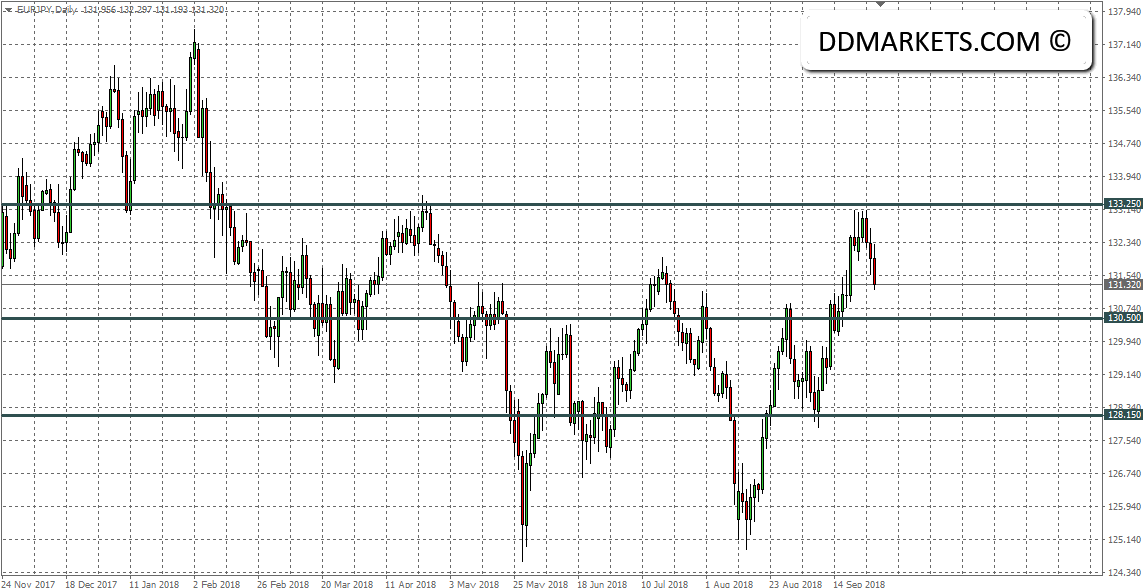 EURJPY is trading at 131.34 at the time of this writing, we are closing the short trade at market price.

28/09/18 SIGNAL UPDATE II: Very similar to EURJPY we may attempt to re-enter AUDCHF on a dip, possibly as soon as next week. We should highlight that the risk that is taken is that the price may not correct lower and maintain its uptrend.

There is some possibility the neckline will be re-tested next week. What may trigger the re-test is economic data from China over the weekend. 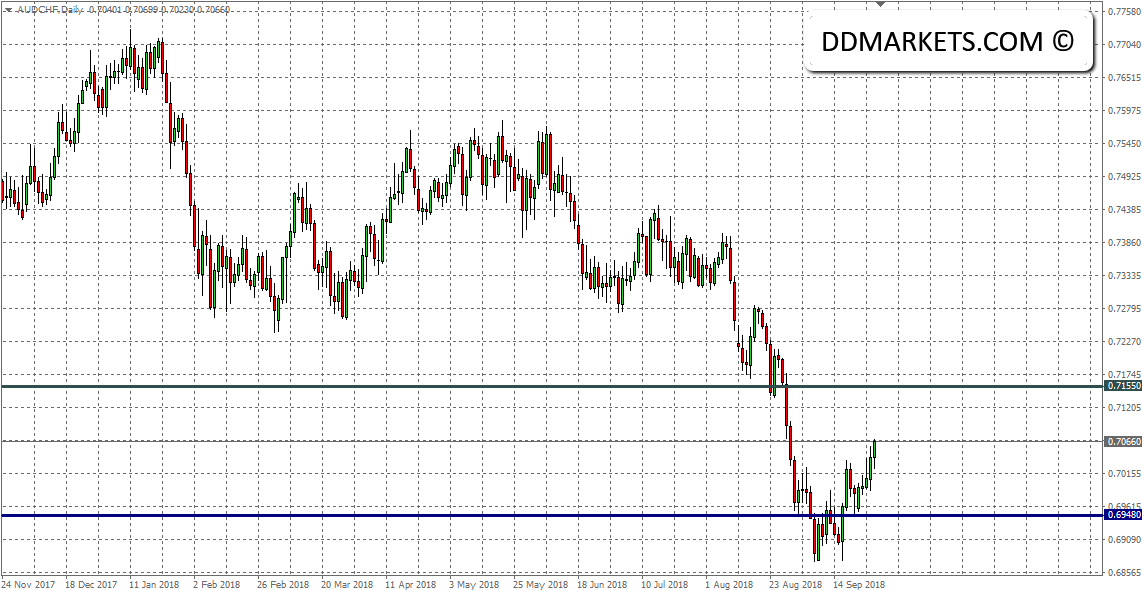 AUDCHF is trading 0.7066 at the time of this writing, we are closing the long trade at market price. 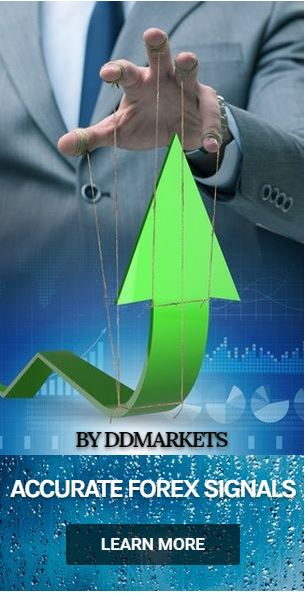