After analyzing some of myfxbook top trading systems we review some of Etoro’s top traders in one of the vast growing social networks in the Foreign Exchange (Forex) market. Although we have covered social trading in great depth in our prior research the convenience of copying a trader is extremely attractive as it does not require constant monitoring of the market. There are many flaws with social trading, we will cover them briefly at the end of the research.

Tracking Etoro’s top traders is not as straightforward as myfxbook. We could not find a ‘most popular’ or ‘most followed’ categories for the traders so we manually selected the traders that have a fairly large amount of followers. Our first trader is listed as ‘trex8u247.’

Our first impression is that trex8u247 is stock trader although he does allocate some capital for forex trading.

Etoro do not display the drawdown for any of their traders so we must make some assumptions based on our own experience. One must ask themselves why the drawdown is not displayed in order to maximize the transparency.

Based on the current portfolio the total invested amount (in %) form the balance stands on 75.37%. This is an indication some leverage is used. It is a fairly large risk to take as it leaves you almost entirely exposed to the market fluctuations. Stops may not be be filled on gaps, it is a risk trader is willing to endure.

Stocks (as opposed to forex) can spike higher or lower 20% – 30% in a single trading day, especially during the earnings season. Assuming the data is accurate, the trader is due to experience some fluctuations when the brexit negotiations are set to begin on 19 June as well as the upcoming Fed monetary policy.

Based on the data Etoro provide, 2 trades are opened per week with an average holding time of 4 weeks. Approximately half of the total weeks are profitable. This is the first indication that the drawdown exists. Etoro does not provide access to the trades history but displays a monthly return, negative or positive. Judging but the overall performance from the past 2 years (Etoro limits the access to only 2 years) the most notable spike the monthly ROI was only seen recently. 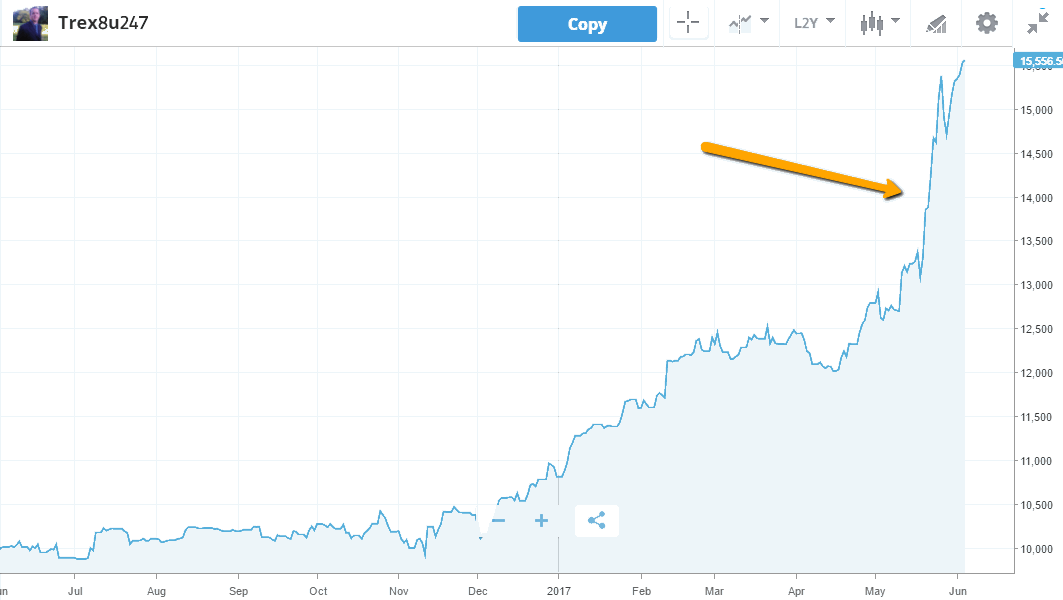 We suspect that what has contributed to the spike in the ROI are trades in Bitcoin (BTCUSD) and Ethereum (ETCUSD). The volatility in cryptocurrencies is significantly higher compared to other instruments at the time of this writing. Due to the limited data Etoro provides time will tell whether the trader can withstand the pressure he may experience by the end of the year.

Another what appears to be a stock trader is in Etoro’s top traders. As opposed to trex8u247 the trader has 87.98% of his capital in the market, which is a sign some leverage is used. Stops may not be filled at gaps, which is a fairly high risk the trader is willing to take.

Approximately 4 trades are taken per week with an average holding time of 2 weeks. 66.67% of the weeks are profitable, which is another indication of some drawdown although the entries appear to be more accurate if compared to trex8u247. 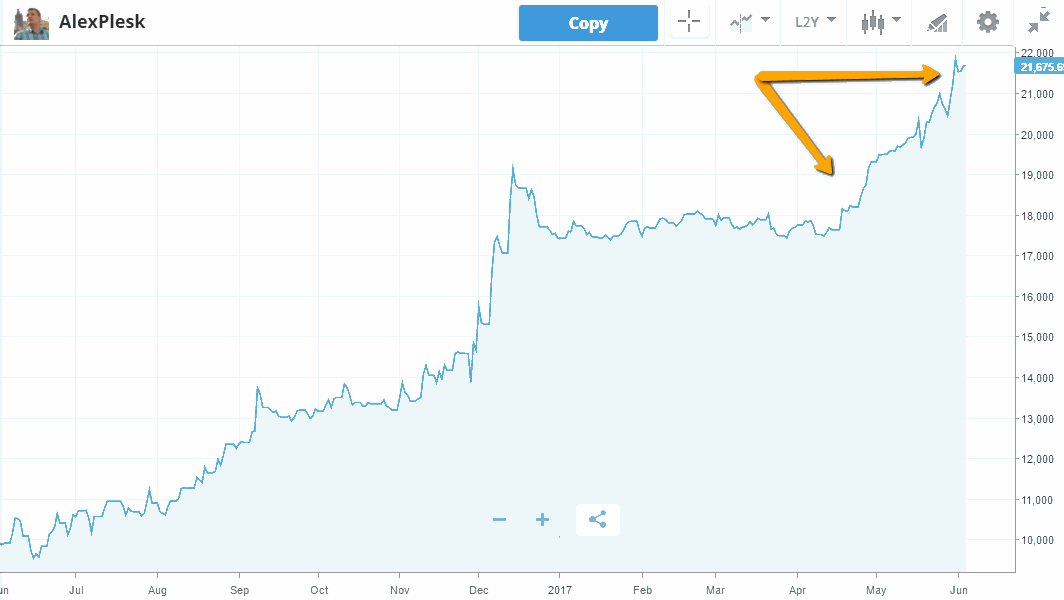 Very similar to trex8u247 however we suspect a large chunk of the recent profits was made in cryptocurrencies. The trader does not scalp and is willing to hold onto the trades for some time. Nevertheless, he may also be prone to fluctuations in global equities by the end of the year as we mentioned earlier.

Both traders spread the risk across a number of stocks, which is a good sign. One of the possible events that could trigger a gap across numerous US equities for example is a US sovereign rating downgrade. If a large amount of the balance is exposed to the market, stops may not hold and significantly increase the loss. Do note these stocks are CFD’s in Etoro.

Another interesting event we have noted is that many of Etoro traders earned a fairly large profit from trading Bitcoin and Ethereum (mostly long trades). A one-off event may be insufficient to project any future returns from the trader. We are only covering these 2 traders but we may add more traders to the current list.

Our approach to social trading is very much different than Etoro. We do not believe in forcing trades in our subscribers’ accounts. We present the strategy for every trade that issued and allow the trader to determine the funds he or she wishes to allocate per trade.

We do issue trade updates on all our trade alerts (signals), some of our subscribers customize the strategies we provide based on their own experience but it is completely optional. You are welcome to review our trading strategies and forex signals for the UK brexit referendum that took place in 2016.