The Italian Economic minister reassured investors Italy will remain in the euro zone, which did trigger minor a minor reaction in global markets. The key focus is on the Brexit bill by the UK House of Commons (due Tuesday), the US Consumer Price Index (CPI), the Fed and the European Central Bank (ECB) monetary policies.

The ECB monetary policy may have the greatest impact on global markets as the central bank hinted it may be considering exiting its current QE program. We suspect the ECB spread these reports in order to contain the market reaction to Italy’s political crisis at the time.

President Trump is due to meet with Kim Jong-un late in Asia, it is challenging to determine whether it will have a significant impact on the market. However, in an event the meeting turns sour the impact may be more significant. 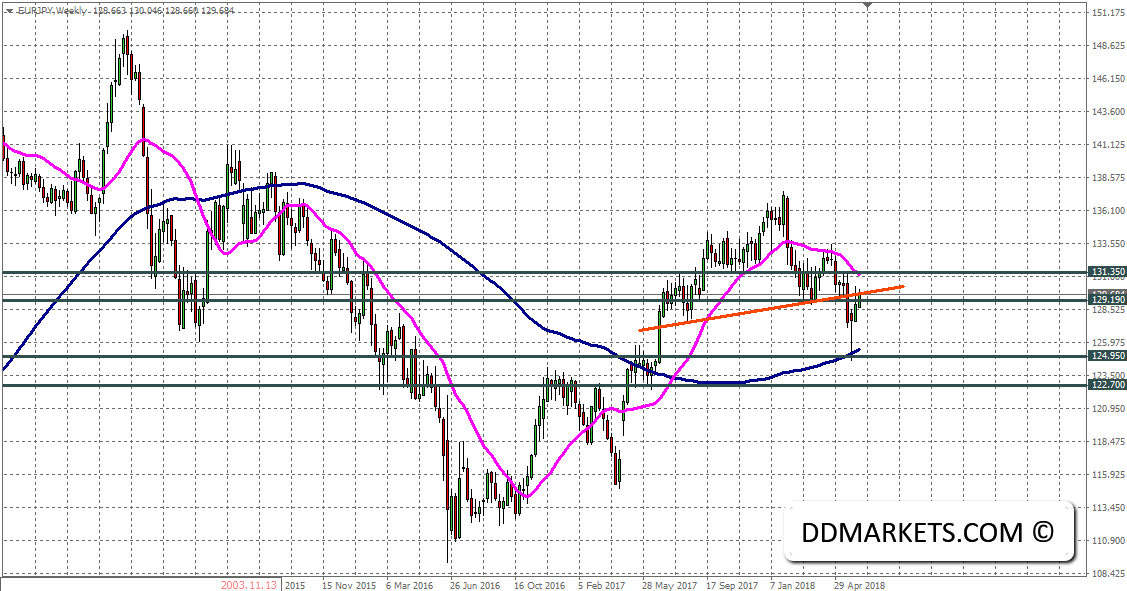 The 100% objective of the reversal is 122.70. In an event the price has acquired the bearish target of the H&S (marked via the 100MA in blue) the price may be heading for 133.50. We suspect that the weakness has not ended. We would like to present EURUSD weekly chart. 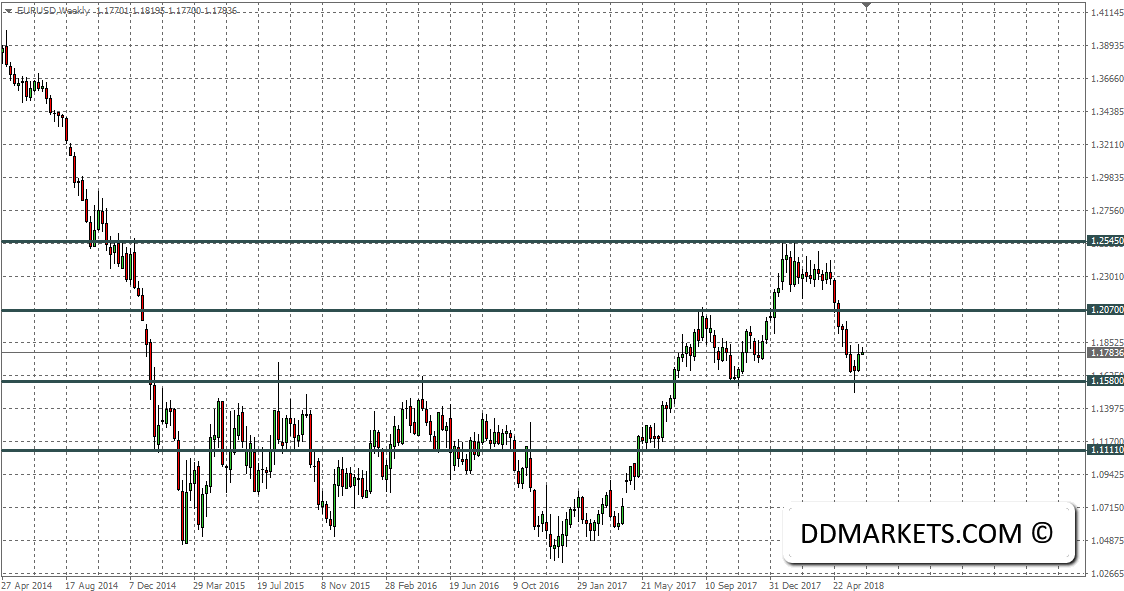 EURUSD is in the midst of painting top H&S reversal pattern on the weekly chart. There may be a long entry in Euro Dollar but the price may retrace as low as 1.1545 before correcting higher. We can layer a buy limit order in EURUSD or attempt to capitalize over the potential weakness via EURJPY before considering a long trade in EURUSD.

We decided to avoid GBP for the time being, in an event the vote will have a bearish impact on GBP pairs and crosses GBPJPY may drag EURJPY lower. There are expectations for the vote to fail but on many occasions such expectations lack accuracy.

We should also highlight that we suspect any weakness in EURJPY may not be related to the ECB monetary policy. We will have to study the impact on the Fed monetary policy on the market before deriving any conclusions.

Recent reports suggest Kim Jun-un has set a deadline for ending the summit. More headlines of similar nature may trigger safe-haven flows into the Japanese yen but we write this with extreme caution.

Many currency pairs and crosses were ranging for some time. The range is fairly tight, which is more suitable for scalping. Due to the data this week we struggle to believe the range will continue. 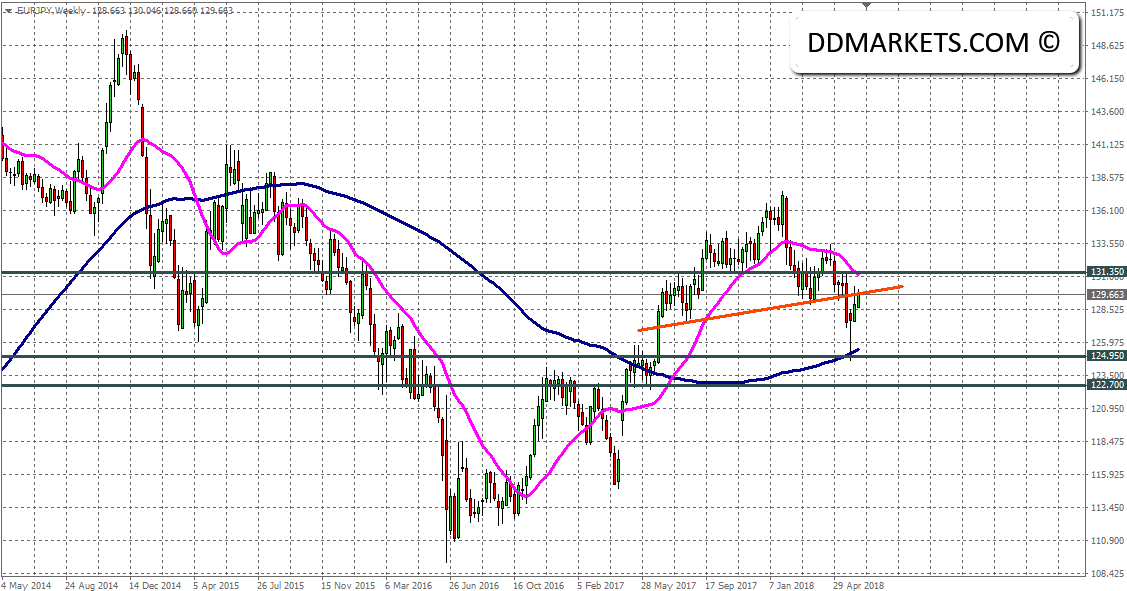 Note: The potential drawdown is a re-test of the 21MA (131.35). We provided more room in an event of a short-lived spike above the MA.

14/06/18 UPDATE: From a fundamental angle EUR may continue to weaken against a basket of currencies following the ECB monetary policy. As we updated last week as assumed this would be the outcome as the central bank employed a tactic that as used by the Fed. 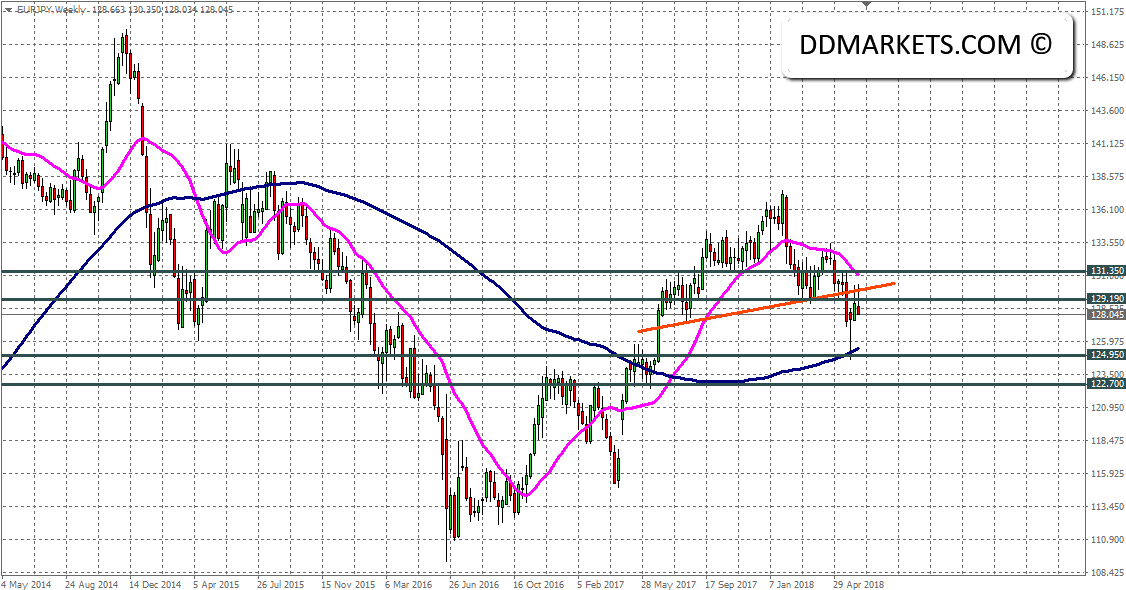 Our main concern is the long entry in EURUSD. The entry should have been invalidated but it is still present at the time of this writing. We are uncertain whether we wish to attempt a long trade in the Euro following the ECB monetary policy.

The dip may have also provided a long entry in EURCAD but we decided to wait for the weekly close even at the cost of missing the entry.

EURJPY is not EURUSD or EURCAD. The challenge is whether JPY will strengthen following the BOJ monetary policy. We expected stronger EUR selling in today’s session.

This was a very difficult decision to make, we decided to close EURJPY short trade at market price (128.10). We did consider a partial realization instead but the potential entries in EURUSD and EURCAD must be taken into account.