Since the Swiss National Bank (SNB) lifted the 1.2000 floor in EURCHF the currency pair was able to retrace some of the losses it has incurred. Not many are aware that despite the floor removal the SNB is speculated to have a virtual floor in Euro-Swiss. Based on market speculations that were not denied by the SNB the central bank is allowing EURCHF to float between 1.0450 – 1.0750 in the Forex market. Euro-Swiss reached the lower end of the speculated band of the SNB, which we believe is likely to be heavily defended.

We must assume the central bank layered multiple orders in the market to prevent the price from falling beneath 1.0450. We are certain the bank monitors any developments on Greece as an exit from the euro zone will lead to moderate losses in EURCHF. As we updated all our traders via email, fresh speculations suggest Europe may impose capital control measures over the weekend or on 10 April, 2015. Such capital measures, which were speculated in the past is aimed to restrict capital flow ahead of a potential crisis. That means bank transfers will be limited as well as ATM’s withdrawals and boarder checks will be introduced.

If a crisis does erupt from Greece, moderate losses will be seen across the global markets. We believe however the capital control measures speculations should fuel a rally in EUR pairs and crosses until the odds for a financial crisis increase. 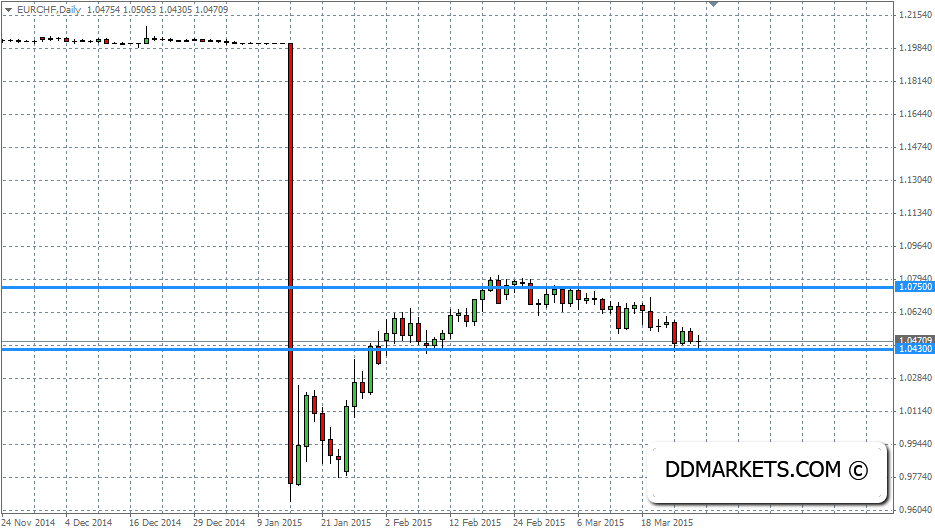 Rather than 1.0450, we draw the key support level at 1.0430. This is a strong support level which we are counting the SNB to defend. Fitch credit rating agency is speculated to publish its rating on Portugal tonight where an upgrade is expected. The key risk to the trade is if Moody’s downgrade Greece at the end of today’s session, which is likely to cause EURCHF to gap lower at the opening of the markets on Sunday night. We are however counting on the SNB orders to soak the market bears.

12/04/15 UPDATE: Moderate selling in EUR pairs affected our long trade in EURCHF. Despite the fact we have realized a minor profit the price has triggered our protective stop loss order.

As EURCHF trade is closed it can  now be accessed by all traders. Open trades are restricted to members only. We have been proving trade alerts in the spot Forex market since May 2014. Sign up for one of our plans and review our documented trades performance.

Digital Derivatives Markets is a global leader in trade alerts and market education.