Significant Losses to the Euro

The Euro posted moderate losses in today’s session against a basket of currencies. While many interpreted the heavy slide in EURUSD as a result of the US economic figures, we would like to draw you attention to else has been flooding the markets, which may have prompted further losses EUR pairs and crosses. We have repeatedly stated Greece is likely to require more funds in addition to its current bailout package from Europe.  Greece may require another bailout package with an estimated size of EUR billion (not EUR 20 billion), which means deeper reforms may be required.  It has also been suggested the Eurogroup deal that was sealed earlier this week is subject change an no debt relief measures will be discussed until the next four months. We are maintaining our outlook for Greece as published in the weekly update that the Greek Prime Minister, Alexsis Tsipras is likely to resign at the pressure continues to mount.

We have anticipated the selling pressure in EURUSD  as we expressed in the weekly update but refrained from executing the trade due to lack of technical evidence. We believe many forex traders incurred losses in trading Euro-Dollar in today’s session. Our focus however is on EURGBP. 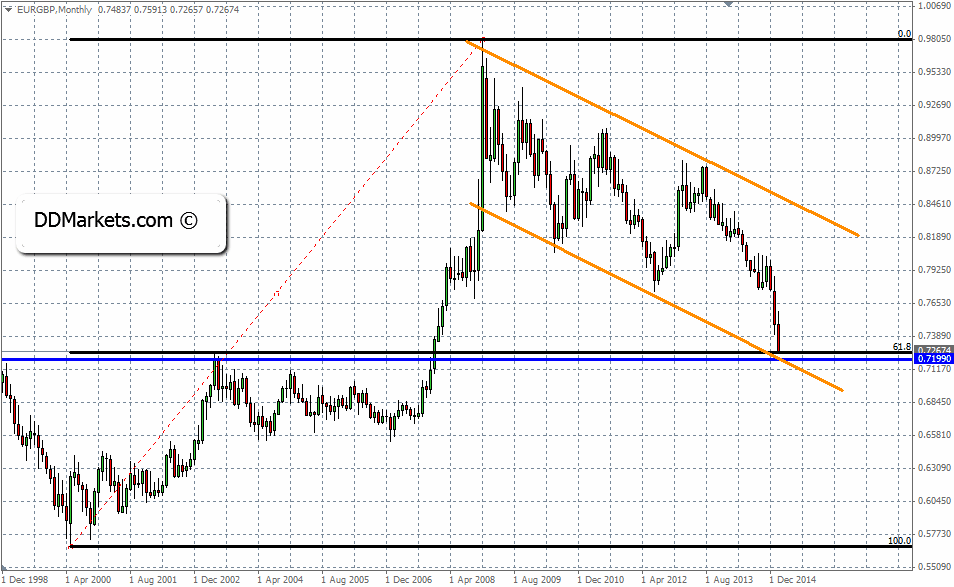 The monthly chart has reached 61.8% Fibonacci retracement (measured from year 2000 lows to 2008 highs), which is within a near proximity to a firmer support level at 0.7199. The support levels may lead to a substantial technical correction, which are yet unable to determine its strength at the time of this writing. You may also note a third support level (lower orange line) that may contain any further weakness in EURGBP. By the book, the trade should only be executed at the monthly close and not before. We are nevertheless aware that tomorrow (Friday, 26 February, 2015) is the end-of-month fixing where we may see a notable USD selling in the market. We do not have a technical entry in EURUSD or GBPUSD, which is why out prime focus is on EURGBP.

The key risk of executing the long trade at market price is that the price may test the 0.7199 support before retracing higher. The drawdown is bearable to us due to the Risk-Ratio (RR) that is inline with our risk management.

Updates regarding the trade will be posted at the bottom of this page when found relevant. You will be notified via an email when such updates are made.

02/03/15 UPDATE: Moderate gains were noted in EURGBP as expected, currently priced at 0.7294 at the time of this writing. We are closing 10% of the long trade at market price.