The European banks stress test is due to cover 124 banks in the Euro-Zone. DDMarkets is proud to present its outlook on and determine which banks are expected pass and fail the stress test.

The stress test aims to unveil the ability of European banks to deal with hypothetical scenarios to ensure they can withstand an economic meltdown, a lesson learnt from the Lehman Brothers collapse several years ago. The ultimate goal of the test is to revive confidence in banking sector. The stress test is conducted just before the Single Supervisory Mechanism (SSM) kicks in at November 2014 where the European Central Bank (ECB) itself will supervise over 100 banks.

In order to understand the SSM the ECB published the following video:

In order to pass the test banks must target 5.5% Common Equity Tier 1 (CET1). To simplify,  CET1 measures the capital strength of the banks by comparing its equity capital with risk-weighted assets. A bank that achieves a score of more than 6.0% is said to be well-capitalized. A bank that scores 1.5% or below is said to be severely undercapitalized. In our predictions we are targeting European banks that are likely to be found undercapitalized and banks that are well-capitalized.

A sharp rise in government bond yields is one of the key triggers for a financial crises. The EBA presents the banks with a scenario where US long-term government bod yields rise by 100 basis points (bps) compared to the baseline of the first quarter of 2014 (Q1, 2014), rising even more to 250bps by Q4, 2014 compared to the baseline and then levelling off to 150bps by Q1, 2015 and remaining at these levels until the end of 2016. The impact of the US bong yields rise will spill over to the EU, first in Germany and then spreading to other EU countries. The stimulated financial crisis will peak in Q4, 2014. The EBA refers to the sharp rise in bond yields as ‘shocks.’

We have gathered for you some of the stimulated bps shocks in deviation from the baseline to European countries.

Shocks to Bond Yields in Bps

The impact of the elevated long-term government yields will reflect in higher borrowing costs for banks where an 80 bps rise of short-term interbank rates is expected, the outcome of rising funds costs for banks.

The rising tension in money markets will spread into equities. The EBA takes a scenario in which the stock market takes a deep bearish dive into the abyss along with US equities that plunge by almost 30.0% . We have gathered for you some the hypothesized declines in European equities  per country.

Due to moderate pressure on global markets, the EBA explores a scenario of a mass currency depreciation, which is virtually inevitable. Part of the test is facing the Czech Republic (CZK), Poland (PLN), Romania (RON), Hungary (HUF) and Croatia (HRK).  Naturally, the FX depreciation will have a direct impact on the implied GDP.

Euro swap rates and corporate bonds will also take a hit from the hypothetical financial crisis according to the EBA.  The corporate bond shocks rages between 60bps  for AA/A- rated non financials and over 250bps for BBB- rated financials. Euro swap rates are then expected to rise in a direct reaction to the elevated US and German benchmark yields.

Emerging Markets and the Housing Bubble

The Emerging Markets Economies (EMEs) will suffer greatly during the hypothesized financial crisis as confidence is likely deteriorate sharply, accompanied with  a notable slowdown in private consumption and fixed investment. The EBA provides house price shocks as the crisis will have negative impact on real estate. Below are the house price shocks in deviation to the baseline.

Under the financial pressure banks will tighten loans to the private sector, which in return deface the economic activity in the EU. As a result of the funding constraints the real GDP is expected to be negatively affected. Oil prices, non-commodity prices and monetary policies will remain the same. Below is the expected impact with deviation to the baseline.

Of course, the financial crisis will not be quarantined to Europe but will spread out to the rest of the world, capitalism at its wicked side. The stress test will present a scenario where moderate contraction is noted in global GDP and Consumer Price Index (CPI). The figures below are in deviation from the baseline.

GDP Outside the Euro Zone

CPI Outside the Euro Zone

GDP Contraction in the Euro Zone

The EBA faces the banks with a scenario where the GDP contracts rapidly across the euro-zone. Below are the adverse deviations from the baseline:

The Harmonised Indices of Consumer Prices (HICP) will also be tested as part of the stress test. As you mat have noticed, the test is facing the banks with scenarios from last economic crisis in 2008.

HICP Deviations from the Baseline

Combining the adverse scenarios, the EBA presents moderate declines in both residential and commercial properties.  We will present the total decline in percentage by 2016.

The aim of our research is to predict which banks will be pass the test and which will fail. The results, which are due in October 2014 may have a great impact on the banking sector.  We do not believe the trade must be executed within a close proximity to the results as speculations are likely to flood the market we near October. In order to establish our outlook for the EBA European banks stress test we must learn what banks will be tested. We have gathered for you  some of the names out of the 124 banks that are due to be tested.

At the time of this writing the leading indices are bleeding across the board as we anticipated at our earlier research. We observed the above stocks via technical analysis for long-term trades. From a fundamental angel we received the impression that German and French banks are likely to fail the test. However, the current monthly charts actually provide a different outlook. According our technical models we discovered a  strong potential for dip-buying  opportunities. Although no entries are given at the time of this writing we believe the test will be a positive surprise for the leading banks we are providing.

We favour dip-buying strategies for Deutsche Bank. As you may see from the monthly chart a strong support is countering the heavy weakness. An entry will be given on a monthly close above the support. We would then search for a weekly/daily entry and issue the trade in our trade alerts. If the support is violated on a monthly close we would have to re-evaluate our bullish outlook for the stock. Based on our models however there is a firmer possibility the support will remain firm.

Our studies reveal that Coomerze Bank may provide a decent entry for a long-term trade at a much lower price as seen on the monthly chart. There is a potential for a dip-buying entry at the end of the month but similar to Deutsche Bank we would update the entry in our trade alerts. The risk is for reversed Head-And-Shoulders (H&S) in which we are looking to capitalize over the recent retracement to join the anticipated bullish reversal. There is a fair possibility for a long entry at current levels but we wait for a daily confirmation. 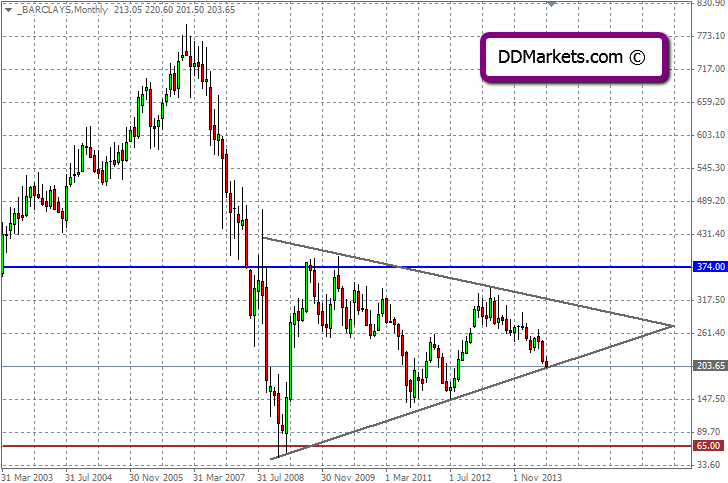 Barclays plc differs from the German stocks. Out technical models suggest a great volatility is before us (based on a monthly chart). We expect extreme losses for the Barclays plc in the long-term, possibly targeting GBP 65 (within a close proximity to the 2008 financial crisis). We are uncertain if this will be a direct result of the European (and the UK)  stress tests but more likely would occur if the UK votes to exit the EU in a public referendum. It is not far-fetched at all the Britain MP’s appear to be instigating the public to exit the EU. We will be closely observing developments in the UK to determine if such a referendum will take place even if David Cameron is not re-elected in 2015.

We will keep updating the stocks we provided in this post and provide entries in the trade alerts section when applicable. Follow us via Facebook, Twitter and/or Google Plus to be fully updated.  To be instantly updated on news posts please subscribe to DDMarkets.com. We have recently published out US Q3 Earnings season outlook on selected stocks. 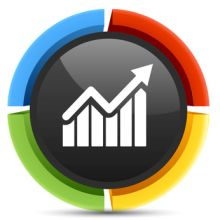