As we have expressed in our recent EUR trade alert, we are not expecting a deal to be made with Greece today. We believe a decision will be made on Monday or Tuesday’s session where at the time of this writing all the positive sentiment that occurred on Friday’s session has evaporated. Our trading strategy for EURUSD is will be based on the outcome of today’s Eurogroup meeting via the 4hr chart. The current sentiment suggests the Euro is likely to gap lower against a basket of currencies such as EURGBP and EURJPY but we are aware anything can change until the Foreign Exchange market opens from the weekend break. 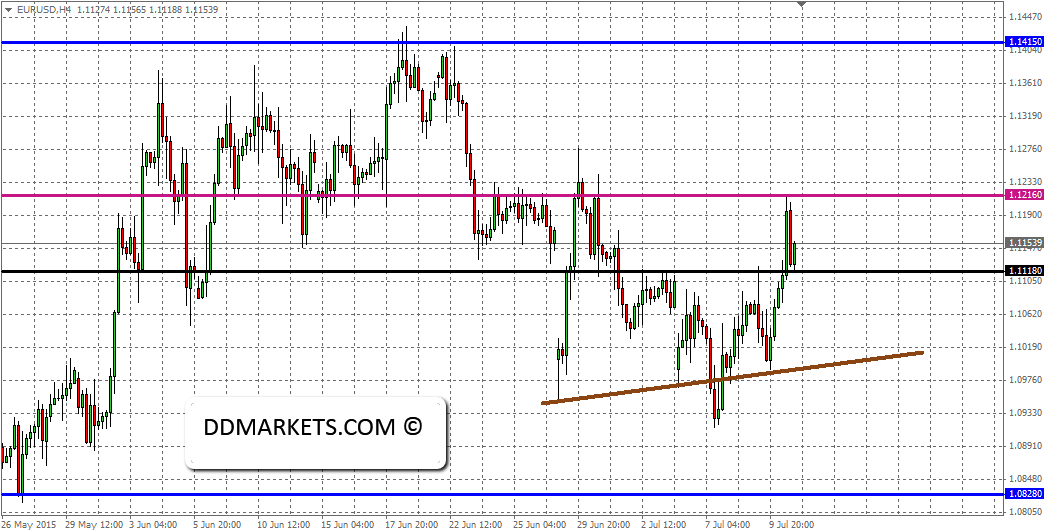 The intraday reversed Head-And-Shoulders (H&S) did produce temporary gains in Euro Dollar and reached its 100% objective at 1.1216. Profit realization aided by traders cutting their exposure ahead of the weekend due to Greece. As the neckline was tested at 1.1118 we suspect many technical traders where lead to believe a retracement is due, targeting the 1.1216 resistance. EURUSD rebounded off 1.1118 by approximately +30 pips before the forex market closed for the weekend.

The first scenario we are going to examine is a bearish gap in EURUSD. The nearest support line lies at approximately 1.1000 (lower support line in brown). If EURUSD does not gap below 1.1000 and a re-test is noted, corrective gains are likely to be seen, targeting 1,1038.

Should EURUSD gap below the support line, we have used the daily chart o determine the next support level, which is at 1.0828. A re-test of 1.0828 and should the price remain above the support line, corrective gains may be seen towards 1.0910.

The second scenario is a bullish gap, which we are not anticipating at the time of this writing unless a breakthrough will be made with Greece. The gap is more than likely be above 1.1216 in such a scenario. The key resistance is at 1.1415, which if holds on first test is likely to yield to corrective weakness in the market, targeting 1.1350 initially.

Should the EURUSD gap above 1.1415 or below 1.0828, this analysis will be revised to meet the new market conditions. We should clarify that Finland, which is currently objecting to a new deal with Greece demanded the Greek islands to be used as a collateral for a bailout deal when it was structured several days ago. We believe Germany tough stance on Greece is due to remarks made by the Greek government several months ago. Greek officials threatened to seize German assets as a compensation for the Nazi war crimes. It is also essential to note that Germany is the largest contributor to the bailout that was given to Greece.