EURUSD has been held in a +100 pips range for almost 7 days. Despite the US Gross Domestic (GDP) figure on Friday Euro Dollar no significant price movement took place in the currency pair. In our prior EURUSD intraday strategy the breakout of 1.1170 triggered moderate gains in the pair, missing our target by several pips.

Although it may appear little has changed from our past analysis we were able to note a potential downtrend that is beginning to shape in EURUSD 4hr chart. 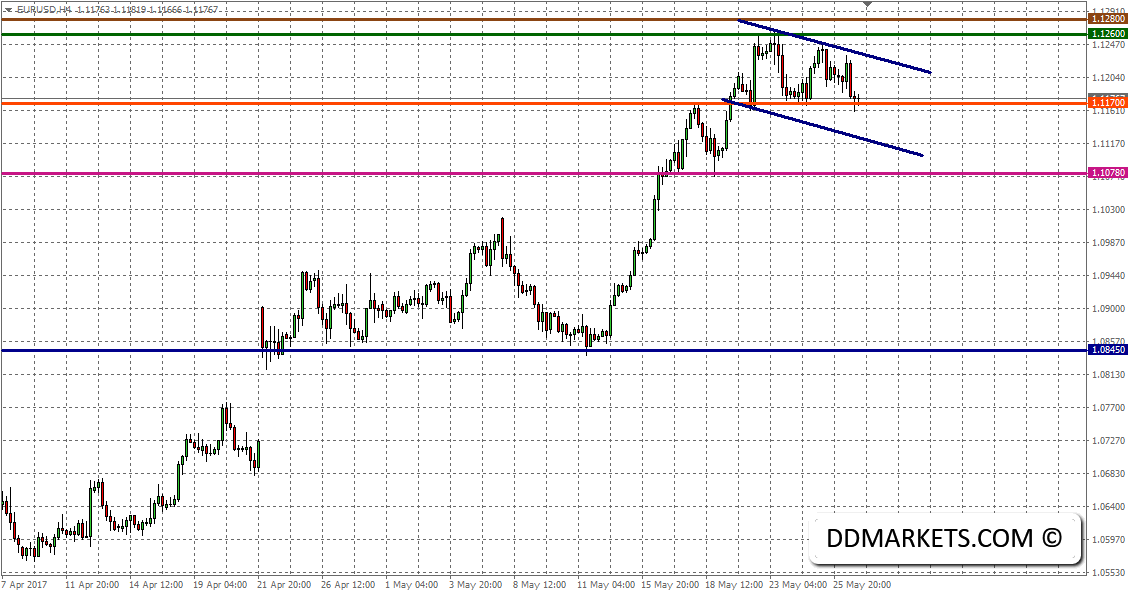 This merely of what may be the very beginning of an established intraday downtrend. We should highlight that the upper end of what may evolve into a bearish channel (upper blue line) is more significant than the lower line as it as several re-tests were already made by the market.

Initiating a short upon a break below 1.1170 is entangled with risks. The lower blue line may only become relevant upon a successful 4hr re-test, which may indicate the price is due to correct higher, targeting 1.1170 (former support). Shorting EURUSD on a 1.1170 break will greatly depend on how firm the break is.

1.1078 is perhaps the key intraday level for EURUSD. Should 1.1078 give it may provide a moderate indication further selling is expected for the pair. Posting a 4hr close below the key level may not be a simple task and may provide intraday long entries if it is able to contain any weakness in Eur Dollar upon a successful re-test.

Due to the recent range we have added 1.1260 as a possible resistance level as we noted it was tested on several occasions. In a scenario the upper resistance of the potential beairsh channel (upper blue line) focus will be on 1.1260. Such a breakout will offer little reward as 11260 is nearby. The resistance may be used for initiating short trades to capitalize over any re-tests.

A break above 1.1260 may be insufficient to execute long positions as we would prefer if EURUSD is able to break above 11280 (a 4hr close). In an event of a successful break above 1.1280 we may be looking at 1.1400 but we will update the intraday startegy should such a breakout materialize.

From a fundamental angle, the European Central Bank (ECB) has stated in numerous occasions it is unlikely to tighten its monetary policy until the very last month of 2017. The Fed is widely expected to hike rates in June but the question remains whether it will push for another hike in 2017.

As the market has already priced-in a rat hike in June (currently over 80%) attention will be on the FOMC statement and the press conference. Trader will look for any changes in the tone of the statement compared to prior statement to determine the trend for the US Dollar. Although it is irrelevant to our current Euro Dollar intraday strategy the Fed monetary policy is one of the key events for June, 2017.

The brexit negotiations that are set to begin in mid-June may have a significant impact on central banks’ future monetary policies, The market attention will first be on the UK elections where Theresa May has recently began to decline in the polls but it will mainly affect GBP pairs and crosses in the Forex market.

30/05/17 UPDATE: We would like to first document the progress of our intraday strategy for Euro Dollar. 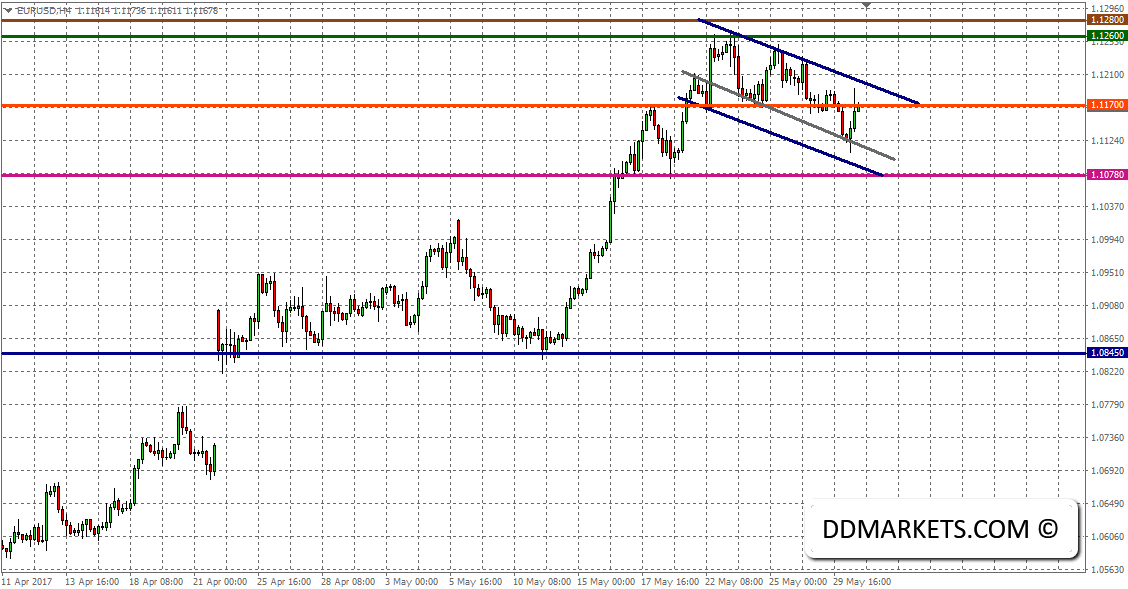 EURUSD broke below 1.1170 and maintained its intraday downtrend. The price missed the lower support of the channel by several pips before correcting higher, aided by reports the ECB is considering to alter its monetary policy in its next meeting.

We have added an additional support line (in grey), which may suggest EURUSD 4hr range is tighter than initially thought. The US CB Consumer Confidence that is due at 14:00 GMT may trigger some volatility in USD pairs and crosses.

As we may be facing a narrower channel (focus on lower grey line) the price may proceed to re-test the upper end of the channel. However, as EURUSD posted a 4hr close below 1.1170 we suspect the risk for another leg lower may be the outcome. An alternative approach is to remain on the fence and seek a re-test of the upper resistance level or the lower support, which may provide dip-selling / dip-buying entries.

02/06/17 UPDATE: EURUSD re-tested the upper resistance (top blue line) before retracing lower towards 1.1170. The pair then attempted to break above the resistance and succeeded, paving the way for stronger gains towards 1.1280. 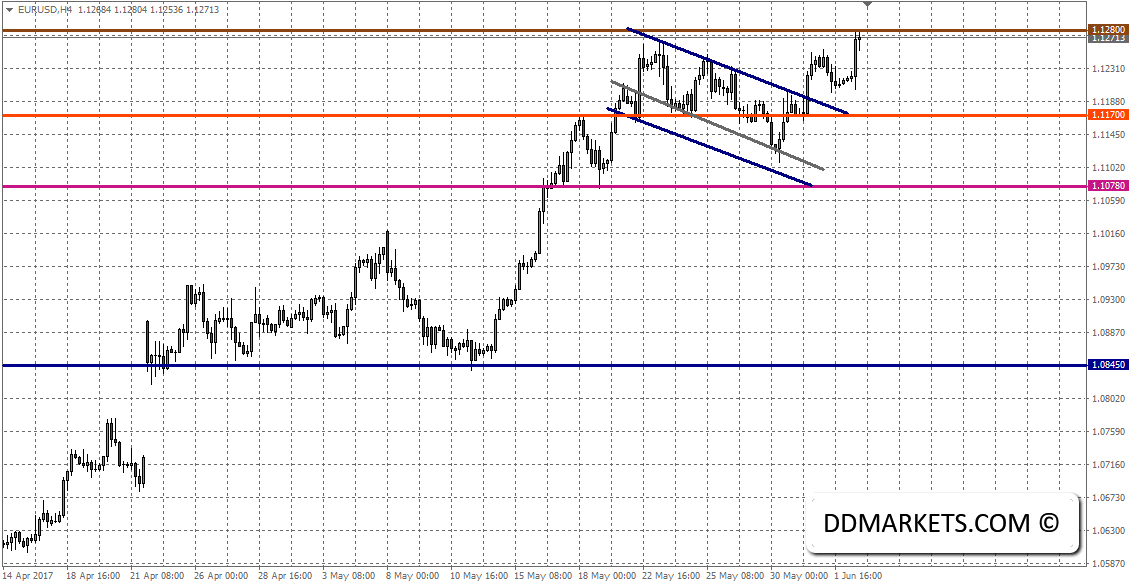 As the objective of the breakout has been acquired EURUSD intraday strategy may now be accessed by all traders as we work on the next trading strategy for the pair.