Greece Vs. the IMF

As we have emailed all our subscribers, we are on the fence in light of recent events in Greece. Our concern is that on either event with Greece slippage may occur in the market, which may result in severe losses.  We have decided to nevertheless release our technical and fundamental observation as we have received multiple emails requesting us to cover the recent events in Greece.

In this page we will analyse EURUSD in the Foreign Exchange market. But first it is  essential to first understand what is happening  with Greece. Earlier this month Greece announced it wishes to bundle all its payments to the end of the month, 30 June. Should Greece fail to make its payments to the International Monetary Fund (IMF) at the end of the month it will default on its debt. Under regular circumstances there is a grace period of 30 days in which the payment can still be made. However, the IMF informed Greece it is revoking the 30 days, adding the pressure on the Greek government to seal a deal with its creditors. It has been suggested and we have informed all our subscribers that the a deal might be made without the IMF. It appears those reports were in fact correct and that Germany has rejected the idea and insisted the IMF will play a role in a deal with Greece. As we have suspected, the new Greek reforms were rejected while the creditors’ counter proposals were rejected by Greece. The Eurogroup will reconvene on Thursday and resume its discussions on Greece at 11:00am GMT.

Greece’s creditors are demanding to remove the early retirement and increase the retirement age by five years to 67 by 2022 and not 2025 as originally agreed.  The creditors also demand The Value-Added-Tax (VAT) should be raised from 13% to 23% (+10%) for restaurants. We assume it is due to the summer holidays as many tourists choose to spend their time in Greece. The corporation tax is expected to be raised from 26% to 29% by 2016, however the creditors are insisting  on an immediate increase to 28%. The defence expenditure is to be cut by EUR 400 million instead of a EUR 200 million cut as offered by the Greek government.

It appears to us the market is not prepared for the possibility Greece will default on its debt aside the recent selling that occurred in Euro Dollar and in the leading indices. We were amongst the camp that believed a debt will be made with Greece but in light of recent developments we are uncertain this will be the case.

Alexis Tsipras promised to its votes he will end the Greek austerity. Coming to terms now with Europe by accepting the above tax hikes and spending cuts is unlikely to be welcomed. What we have suggested in  our market research not long ago is a scenario where Alexis Tsipras will announce his resignation and dissolvent of  the government. As improbable as it may sound, if Alexis Tsipras resigns and calls for snap elections this could very well buy Greece some time. Under such circumstances we believe the EU will release the funds for Greece under Tsipras’s proposals, highlighting the negotiations will resume with the new Greek government. If Alexis Tsipras calls for snap elections, which could take place at any time including the weekends  the market’s reaction is likely to be extremely aggressive. Slippage is likely to be seen across multiple pairs and crosses in the Forex market. This is the scenario that caused has to remain on the fence until more clarity is provided.

We are also certain the European Central Bank (ECB) is preparing to impose capital control measures on Greece should the negotiations fail to deliver a deal.

After saying the above on Greece we will provide an intraday trading strategy for EURUSD. We have been focusing on Euro Dollar in our intraday market analysis since it has been initiated. The recent selling in the Forex market indicate the downtrend is expected to resume but not before a technical retracement. 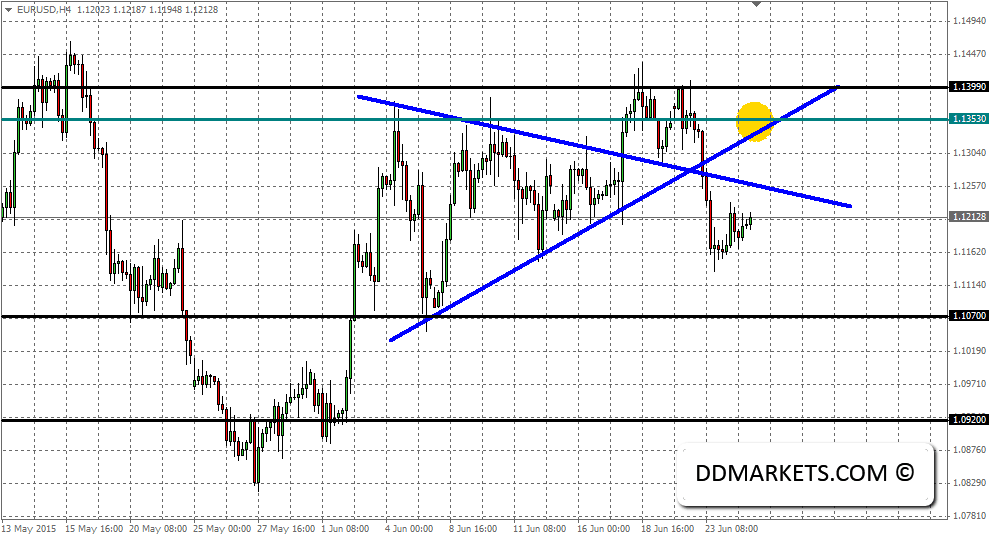 EURUSD breached multiple support levels on the 4hr chart, which suggest further weakness is expected towards 1.0700 initially. However, on numerous occasions the price tends to re-test the breached support (which is now acts as a resistance) before resuming the dowbtrend. Based on our experience it is probable many forex traders layered their stops between 1.1280 – 1.1320. The key level based on our technical analysis is 1.1353. A successful re-test and a failure to break above 1.1353 may trigger a moderate correction in EURUSD, targeting 1.0700 and then 1.0920, which is the 100% objective of the bearish breakout that occurred on 23 June, 2015.

Of course, it is possible the resistance levels below 1.1353 that are displayed in the chart will hold but we are anticipating a stronger rally before a reversal. This does not mean there is a technical confirmation to long Euro Dollar. A entry may only be provided when 1.1353 is tested by the market or lower resistance levels but a firm entry may be provided if 1.1353 is tested.

Tsipras susrprised us by announcing a referendum on 5 July, 2015 on whether Greece should accept the reforms that are demanded by its creditors. This is because if a payment will not be made on the 30 June to the IMF Greece will default on its debt. This ‘heroic’ attempt is to force Europe to release the required funds for Greece’s payment, which will prevent an imminent default. Tsipras has passed the ball to Europe and should they refuse they will be partly responsible for the financial crisis that may emerge.

As EURUSD has gapped lower by over 100 pips this fundamental and technical strategy can now be accessed by all traders. Such strategies when they are released our restricted to members only until we make them accessible to all traders.