The US Dollar (USD) came under immense pressure in the Foreign Exchange (Forex) market in the past week. Political tension from the US ensured the reserve currency was hammered against a basket of currencies, particularly against the Swiss Franc and the Euro.

As the European Central Bank (ECB) is not expected to alter its monetary policy until 2017 unless a risk event takes place, the Fed is currently one of the main central banks that is expected to hike rates in June. The main concern however is not the hike itself (which is already expected) but the future pace of interest rate hikes.

The first fundamental event to have suspended USD weakness is President Donald Trump’s budget plan. The proposed budget aims to slash as much as $3.6 trillion in government, a substantial amount by all means. The market was initially taken aback when the budget suggested to sell half of the US emergency oil. Although the budget requires the approval of the Congress and is more than likely to be modified from its current form it has sent a clear message to the market.

The US Dollar was able to retain some of its strength when the budget was released. The second fundamental news that drove USD higher against a basket of currencies are the congressional hearings, which revealed President Trump did not leak any classified information to Russia nor is he colluding with Russia. The news sent USD higher in the Forex market against most currencies. Our intraday trading strategy for Dollar Swiss (USDCHF) is also based on the fundamental angle of the market as these reports may lift some of the tension the US Dollar has suffered from in recent sessions. 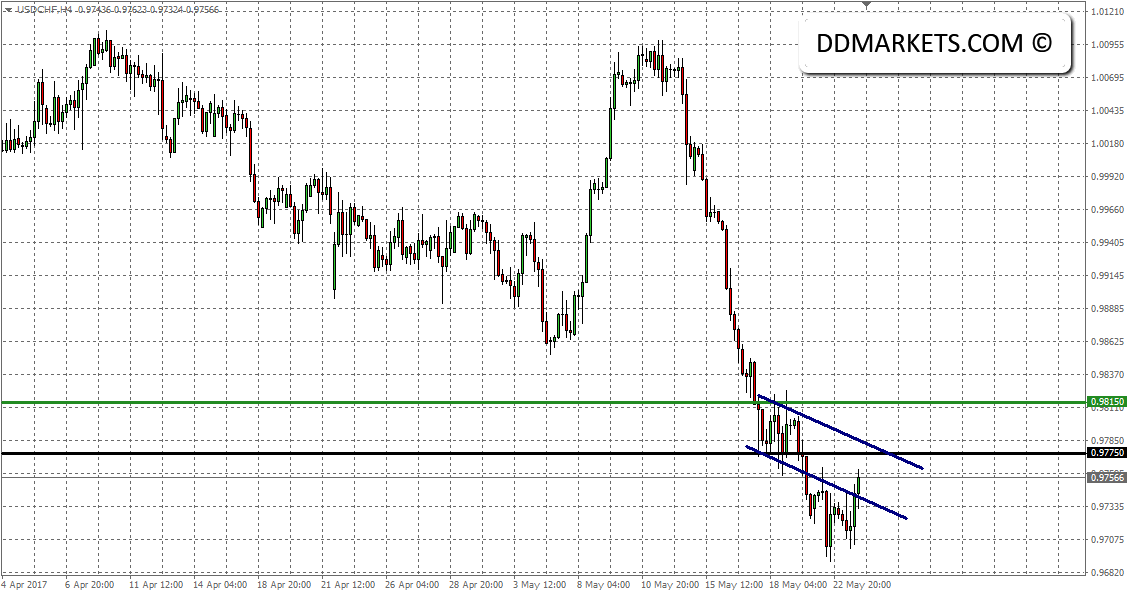 Our initial impression is that USDCHF is beginning to position itself for firm gains in the Forex market. It will still require to break above key price levels to affirm the birth of a bullish reversal as we will soon clarify.

The reversed H&S may have been affirmed on the 4hr chart. We cannot determine whether the neckline (lower diagonal line) will be re-tested as often seen in breakout strategies. Should the re-test take place the dip may be capitalized over by a long trade, targeting 0.9775. A successful break above 0.9775 may pave the way for further gains towards 0.9815.

Should USDCHF succeed in overcoming 0.9815 it is the first technical signal that we may be in front of a much stronger trend reversal.

The FOMC Minutes and GDP

The Federal Open Market Committee (FOMC) minutes may have a significant impact on the US Dollar, however, in light of recent event it is difficult to determine the magnitude of the economic data. We anticipate the US Gross Domestic Product (GDP) on Friday to provide the tone for the US Dollar.

CHF is known for its safe-haven qualities in the Forex market. The congressional hearings may ease some of the tension that was triggered in the past week and may lead to corrective weakness in other CHF pairs and crosses. We  therefore found USCHF to be the most appropriate currency pair for our intrday strategy. As noted in the intraday strategy, a break above 0.9775 is required to affirm further gains in USDCHF.

28/05/17 UPDATE: USDCHF was unable to break above 0.9775, which lead the currency pair to trade lower near, invalidating the lower support. 0.9775 remains the key intraday level for USDCHF.