In our previous social trading review we have covered ZuluTrade and examined the risks signal providers pose to themselves and their followers when they reach the top in a separate article.

In today’s social trading review we will analyse the top trading systems in the Forex market that are provided by myfxbook, a popular service that allow to traders to connect their trading accounts to the signal provider Expert Advisor (EA) via the MetaTrader4 (MT4),

Traders can select which system they wish to follow by linking their trading accounts to the signal provider. The trading system is either run by an EA or is completely manual, which means the trader is opening and closing trades manually in the master account and everything he or she does is also done in the trading accounts that follow the system. Of course nothing is for free.

The trader that wishes to follow one of the systems either pays a mark-ip on the spread or a monthly fee for using the system.

The concept of offering such a service is a great addition to the Forex market but the performance of the top traders after we analyse it is questionable as you will soon discover. We will begin with one of the most popular and notorious systems on myfxbook, Forex Growth Bot or FGB.

The reason why it is one of the most infamous systems on myfxbook is because it incurred a 94.46% drawdown several years ago. If you wonder how can this be achieved the answer is simple, leverage. Excessive usage allowed FGB to turn $250 into over $6,000.

The majority of forex traders that attempt this will fail and very few succeed. FGB is one of the fortunate traders that was able to succeed. When excessive usage of the leverage works (which is the worse scenario that can happen) the trader receives the impression he or she has discovered the ‘holy grail.’

It will work until one day it stops working. When that happens a large chunk of the investment if not all tends to vaporise in the market. This event has occurred to Forex Growth Bot in 2013 where over 90% drawdown was noted.

We assume the broker allowed FBG a 95% exposure but most brokers enforce a margin call at 20%, some even at 40%. We believe this event stripped many traders who following the system off their invested capital. We assume traders were mesmerised by the high returns without paying attention to the leverage and potential drawdown.

We also believe many were aware of the leverage but decided to take the risk, hoping to turn $250 into thousands of dollars. The system is not appearing to be using stops or take profits. It is left up to the EA to decide when to exit the trade, which is a dangerous because when the market conditions change the EA can get out of control.

We do not know if the EA is being re-configured or let go but it appears no new trades were issued since mid July 2015.

WallStreet is the second most popular EA in myfxbook. What caught our eye is the over +%500 return in the course of 5 years, which is approximately +%100 a year, Such Return on Investment (ROI) is often achieved by taking excessive risk, high leverage in most cases.

A 34.5% drawdown is very high but to some traders it may be tolerable. After analysing the performance of the EA we assume that a leverage in the past was between 10:1 – 20:1 is per trade and it has been reduced over time to approximately 5:1 per trade.

The largest stop that was set by WallStreet EA was around 120 pips. It is not possible to achieve a 34.5% drawdown with 120 pips stop unless multiple trades were open at the same time (3 or 4 trades) or the EA only adds a stop throughout the trade and not at the beginning. 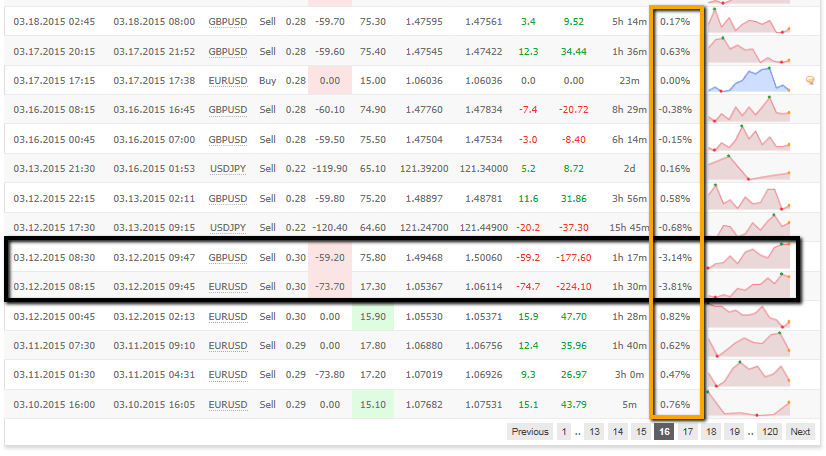 What we also found confusing that on most occasions the EA ignores the take profit that was set. That dents the risk reward or risk ratio of the trade. A 5:1 is deemed as conservative leverage. However, the EA uses all the leverage in a single trade rather than spread the risk over a basket of currencies.

Adding the poor risk reward ratio it will take 3 or 5 consecutive losses where the stop loss is triggered to incur a loss of over 10% of the investment and many more trades in order to recover. 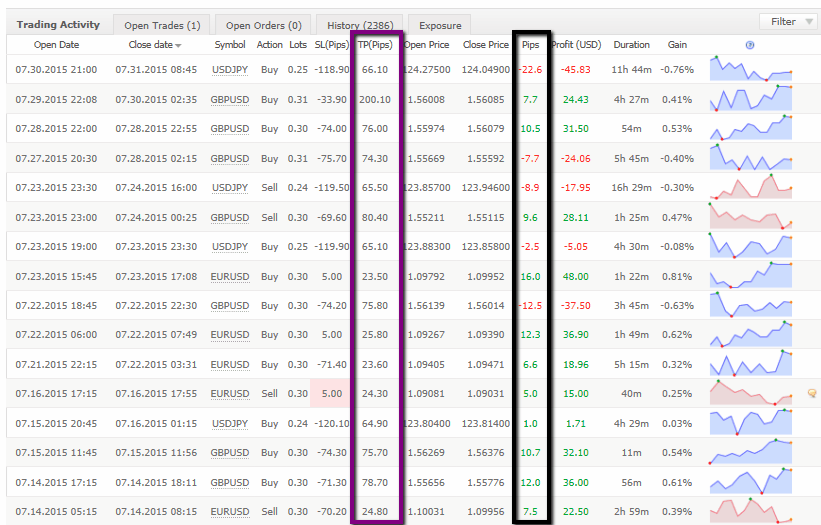 Due to the leverage and risk reward the EA is using, when consecutive losses occur and they will occur as no strategy or EA is bulletproof to such an event the EA the drawdown will spike immediately. On most occasions it will take the EA some time to recover. It can be a few days in the best scenario, weeks, months or perhaps it will never recover.

Many good traders with a good trading strategy that fail to pay attention to the risk reward ratio will fail when an extraordinary event takes places that affects the technical end of the market. When the happens, sadly the trader will incur  consecutive and significant losses that on many occasions are beyond recovery. Traders that invite the EA into their trading account at such times are bound to suffer.

Almost 1,000 traders are following Kelter (including demo accounts). Similar to the above signal providers via EA’s,  almost +%3,000 ROI means excessive leverage was used. We highlight that excessive leverage means when there are consecutive losses the ability to recover is difficult and is often mixed with depression.

In addition, Keltner doesn’t appear to be using stops or take profits, another recipe for disaster. While some traders opt for mental stops (which we strongly oppose but this is our view) many do set a take profit. We are uncertain if the trades are manually closed or the trade are closed based on a certain divergence from a technical indicator.

We have issued a warning to all our subscribers last week that the market is turning more fundamental than technical. When that happens many technical strategies will malfunction. 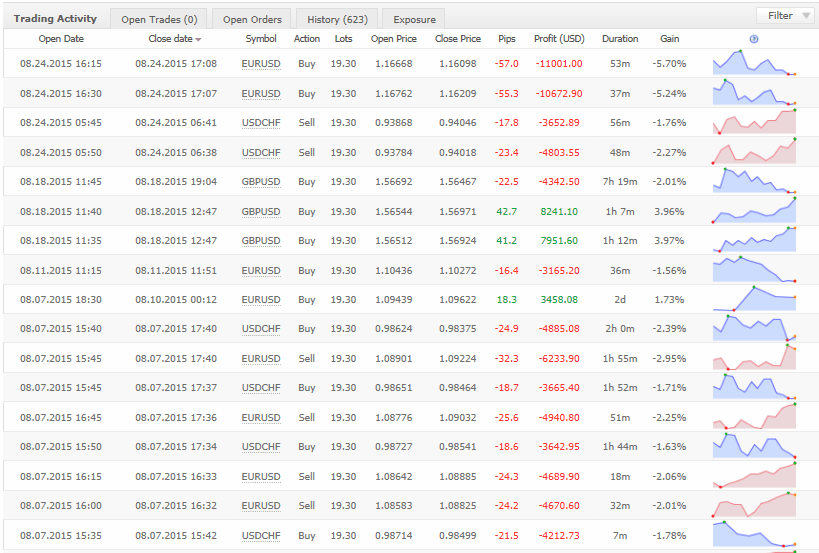 Keltner technical strategy was not spared, which is why hefty losses were incurred in August 2015. In order to safely bypass the phase where the technical strategy is proven useless by the market the trade size is either reduced or the trader must force himself or herself to sit on the fence.

Keltner disregarded the warning signs given by the market and chose to continue with the same trade sizes that only accelerated the losses.  Traders that used the same proportional leverage as Keltner are probably in agony. Those that tamed the leverage were able to substantially reduce their losses.

Based on our research the market will continue to be unstable until mid-September. We wonder if Kelter will alter the strategy or persist while hoping the market will stabilize soon. The question that also remains an unanswered is whether the strategy that has worked for some time must be permanently changed.

To be objective, Keltner is striving for 1 : 1 risk ratio, which provides the EA with the ability to recover although this ability is currently questionable as this is probably not the market the EA or trader is accustomed to.

FX Viper is probably the only trader in the most viewed systems that uses conservative risk management. The leverage is kept to a minimum to ensure a limited market exposure, which is what investors seek. The 13% drawdown is tolerable (some may argue) while the majority of the trades are in EURUSD.

The reason for that is because FX Viper uses scalping strategies. Euro Dollar has the tightest spread which is why it is targeted by many scalpers. The strategy uses no stops in the system, which means mental stops are used based on a daily close below certain price levels or other techniques.

If you have been in the Forex market for more than eight years you should recall the infamous event in EURCHF (not the SNB interventions or removal of the floor) that forced many technical traders to incur losses.

We believe a similar event is currently taking place in EURUSD that explains why technical forex traders are taking a hit from the market. FX Viper decision to increase the short net exposure to the Euro is most probably inline with the strategy he is using so it is acceptable.

We want to clarify there is nothing foul in increasing the exposure to trades and it is used by many professional traders. We are less fond of this technique and have only exercised it once in our trading strategy for the Dow Jones 30 in December, 2014.

Time will tell when FX Viper realizes the market has changed and how he will adjust to the new market conditions. As we stated earlier we estimate the instability to continue for several weeks.

While from a technical angle EURUSD is due to correct lower, in light of recent losses in US equities the Fed is most likely to refrain from tightening its monetary policy in September, which will support a weak US Dollar.

To make things worse for traders that are holding short positions in EURUSD, there is nothing preventing Yellen (Chairman of the Fed) from hinting a new Quantitative Easing (QE) program may be initiated if the crisis continues. Such statements will ensure the resumption of the US Dollar selling will continue, ignoring the upcoming elections in Greece that are scheduled for September, 2015.

Most of the top systems presented in myfxbook (and ZuluTrade as well) are based on scalping. While we at ddmarkets refrain from scalping strategies as we do not find them attractive (this is our view and many may disagree) but they are very popular amongst traders and are not limited to forex trading.

Some of the systems are  successful gamblers that were able to gamble their way through the market, riding on the leverage offered by brokers in the MetaTrader4 (MT4).

Rather than to scalp our way through the market we focus on the daily, weekly or monthly charts. This ensures our target is often above +200 pips while we strive to attain at least 1 : 3 risk reward ratio. Our strategy has been tailored not just for full time traders but also for part time traders.

We do not set the leverage for any trades so it is entirely up to the trader to determine the leverage he or she wishes to use for our trades.  The stops take profits are not randomly placed in the market but are all derived from the charts.

If the risk ratio is weak or if the required stop is excessively high we will refrain from initiating the trade. We have been doing so successfully since May 2014 and invite you to review our trades performance as every single trade we issued is documented on the website.