Following the referendum results the Greek government, lead by Alexis Tsipras submitted its improved economic reforms to Europe on Thursday night. Tsipras committed into tougher cuts in the economic reforms in return for additional funding. The recent International Monetary Fund (IMF) report that stated Greece will require a new bailout package that exceeds EUR 70.0 billion was already known last year but did not receive much publicity.

How will the Euro open on Sunday Following the Eurogroup Meeting over the Weekend?

The Greek government is expected to vote on Friday on the approval of the economic reforms that Tsipras submitted to Europe on Thursday night (couple of hours before the deadline), which will then be discussed on Saturday and Sunday. We suspect the ‘optimistic’ reports that a deal could be sealed over the weekend are spread to prevent heavy selling in global equities as we have recently witnessed in China. We have issued a trade alert in EURCHF at the beginning of the week, which we have closed with a decent profit (+134 pips approx.). After reviewing EUR pairs and crosses it appears the bullish dreams may evaporate following the weekend’s meetings.

Although Euro Dollar (EURUSD) appears to be mildly bullish, we suspect it is a false technical signal. We assume many forex traders made a note of EURUSD bullish and are anticipating further gains. If we are correct in our projection, heavy selling is expected to be seen at the beginning of next week.

We found a relatively neat entry in EURCAD, EURJPY and EURAUD. We are not planning to have a substantial exposure to the Euro so we will focus on EURCAD and EURJPY. 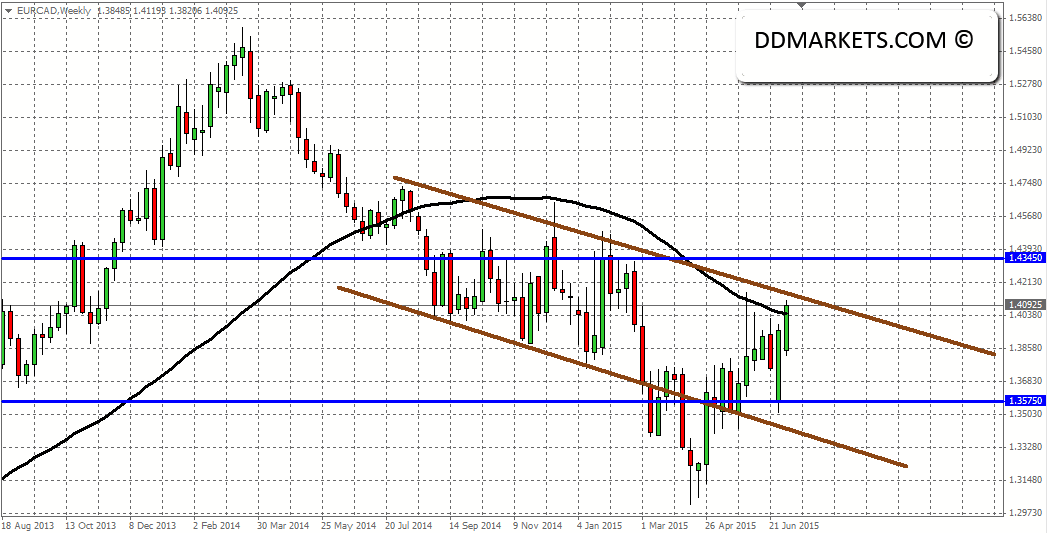 We are expecting the upper resistance to be prevent further gains in Euro Cad where a re-test could take place in today’s session. It is possible the price may temporarily trade above the weekly resistance, which is why we must carefully layer our protective stop loss order. The bearish target would 1.3575.

We must highlight EURCAD could very well re-test 1.4345 before reversing lower but we are relying on the nearest resistance level, which may be supported by the 55 Daily Moving Average (DMA). The Canadian Employment Change that is scheduled for release today at 12:30pm GMT is likely to have a major impact on our trade in EURCAD.

Do note we cannot implement a tighter stop as this is a weekly chart.

We have successfully profited over +300 pips in our prior trade in EURJPY that was released at the end of June, 2015. The price met a firm resistance at 135.78 where a latter resistance at 136.88 is expected to contain any heroic attempts to enhance EURJPY gains in the forex market. 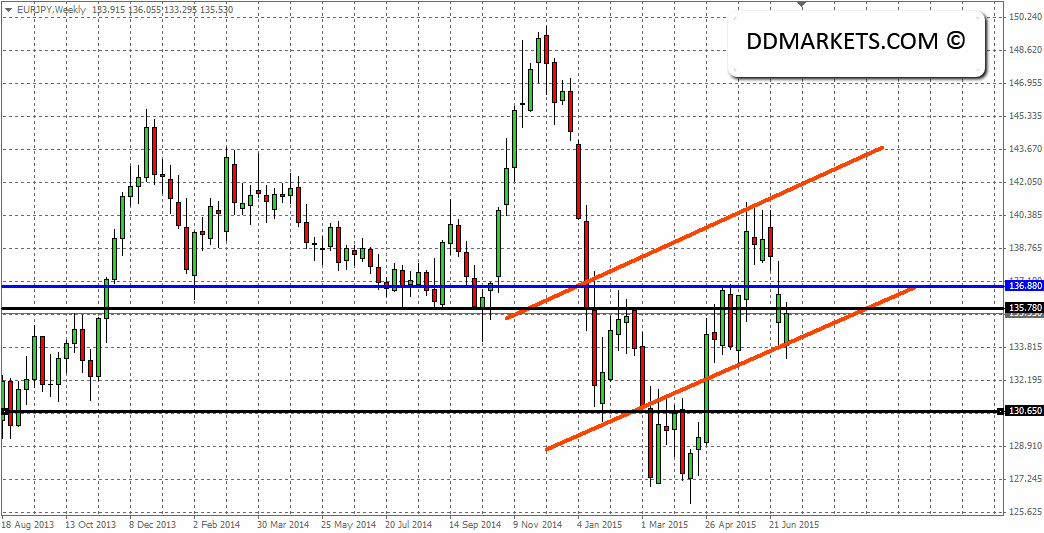 We are expecting the price to reverse, possibly due to a gap following the weekend’s meetings that may drive the price below its weekly support (lower orange line), targeting 130.65.

We should highlight that we are not expecting to profit over EURJPY and possibly EURCAD in today’s session but at the beginning of next week. We believe current levels are attractive enough and the possible incurred drawdown may be minimal.

Do note we cannot implement a tighter stop as this is a weekly chart.

We also have a technical entry to short the indices but due to the required stops of the above trade alerts we do not desire a greater exposure. Should the Euro suffer form heavy losses in today’s session and the indices remain elevated we may consider issuing a separate trade alert for the indices. Updates regarding the above trade will sent to you via an email and updated at the bottom of this page.

10/07/15 UPDATE: Risk appetite is dominating the markets, which led to substantial gains in EURJPY, trading at 136.53 at the time of this writing. We have made an extraordinary decision to shift the protective top in EURJPY from 137.05 to 137.20. The reason for that is because we are concerned the spreads may widen and that EURJPY trade near 137.00 before reversing lower. We can confirm the protective stop will not be shifted again. EURCAD is trading at 1.4172 ahead of the Canadian Employment Change.

10/07/15 UPDATE II: EURJPY triggered the protective stop, incurring a loss. After studying the market it appears the most significant buying occurred in EURJPY, which were then reflected in other EUR pairs and crosses such as EURUSD.

We have notified all subscribers of our intention to short the DJ30 as our market exposure has been reduced. The following was also sent via an email. 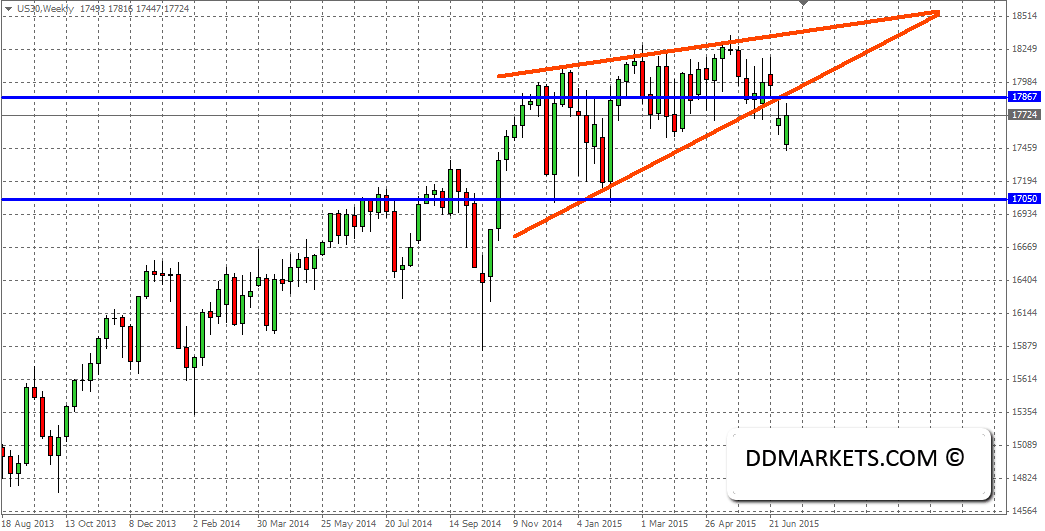 DJ30 short at market price (17,724), protective stop layered at 17,957, targeting 17,050. There is a possibility the price may rise towards 17,867 before retracing lower but this is not something that is guaranteed to happen but must be acknowledged. This is a weekly entry. 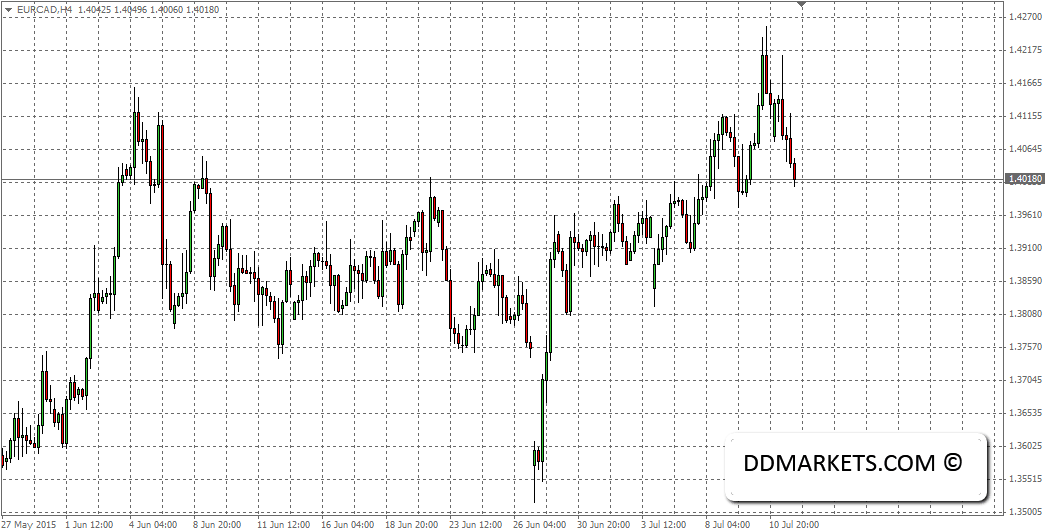 We are closing 20% of the short trade at market price.

19/07/15 UPDATE: DJ30 triggered the protective stop loss order, incurring a loss. EURCAD is trading at 1.4047 (market is closed) at the time of this writing.

21/07/15 UPDATE: EURCAD triggered the protective stop at the entry. We were able to realize a fair profit from the short trade.

As EURJPY, DJ30 AND EURCAD trades are closed this page can  now be accessed by all traders. Open trades are restricted to members only. We have been proving trade alerts in the Forex market since May 2014.