The Bank of Japan (BOJ) is displeased with the recent strength of Japanese yen (JPY) and signals from Japanese officials that Japan may intervene to weaken the yen were not late to come. Although we tend to dismiss conspiracy there is one particular speculation that is going around the markets. A secrete agreement was made in the last G20 meeting in Shanghai to weaken the US Dollar (USD) in the Forex market in order to cool global markets.  Although it does explain why we have noticed awkward price behaviour in the Foreign Exchange market we still believe it is safe-haven flows that prompt EURUSD higher and then spilled into certain currency pairs. As we suspect large stops are placed above 1.1495 EURUSD gains additional attraction from key market players.

We have already experienced the wrath of the RBNZ when the central bank was secretly intervening the Forex market in order to weaken the New Zealand, negating our technical models that suggested NZD is due to correct higher.

Predicting the levels for a possible FX intervention is a challenging task. We have studied the past FX interventions of the BOJ (not under Koruda) and we hope our experience will serve us in our JPY trading strategies. To recap, following a risk aversion mode where the leading indices such as the Dow or SP500 are heavily sold, EURUSD is enjoying safe-haven flows. In the past it was the US Dollar, Swiss Franc and the Japanese yen but at the time of this writing it is limited to EURUSD and JPY. As Euro Dollar remains elevated and the JPY is rising against a basket of currencies, USDJPY is vulnerable to heavy selling. Adding more fuel to the bearish fire, we suspect big market players are buying the yen to increase the pressure of the BOJ to act and contain further appreciation of the yen.

The BOJ is due to hold its monetary policy meeting at the end of April but as seen in the past it can easily be re-scheduled without prior notice, the meeting could even take place today in theory. The BOJ already stated it cannot force a floor in JPY pairs and crosses as the Swiss National Bank (SNB) has conducted some time ago due to the FX volumes, which enhances the possibility of a FX intervention.

FX intervention is often conducted during illiquid hours / trading days. Specifically for the Bank of Japan it is the Asian session and Friday’s but we highlight the BOJ may act whenever it wishes to do so. Dramatic announcements over the weekend when the markets are closed are also possible. We will begin with a technical approach to the possible price levels the BOJ may intervene in the Forex market.

The top Head-And-Shoulders (H&S) were spotted by us earlier in 2015 when it emerged but we were unable to fully capitalize on the downtrend we have been anticipating.

The objective of the reversal lies at 100.95 but the downtrend may subside as the price approaches 105.70. Initiating a long trade in USDJPY means the protective stop must be layered beneath 105.70 if the weekly chart is used. If the BOJ intervenes the price may extend beyond 111.00. We have no intention of exercising a stop that exceeds 300 pips with a possible drawdown of -250 pips (approx.). We can opt for a tighter stop via an intraday time frame but it will not diminish the risk of the position.

There is a minor possibility 108.00 may contain the weakness but the risk that is entangled with layering the protective stop below 108.00 is immense. If a technical retracement to the heavy selling does not take place within the next 24 hours there is a high possibility of the stop being triggered by the market.

Similar to USDJPY 108.00 minor support, AUDJPY may be painting reversed H&S on the daily chart. The protective stop loss must be layered below 79.72 where the target will be the daily resistance at 86.45. Although it may appear as a decent entry, in light of heavy JPY buying by big market players it a struggle to assess whether support (in blue) will hold.

A similar entry is also found in CADJPY, CHFJPY and GBPJPY, Euro yen and Kiwi yen are the least attractive amongst the yen pairs and crosses. AUDJPY is our favourite candidate for a long trade due to the positive interest and the required stop. We will revise all JPY pairs and crosses towards the daily close and decide how we wish to proceed as we do not wish to turn our intention to long AUDJPY and/or possibly USDJPY into a suicide mission.

We decided to opt only for USDJPY as we do not wish to have excessive exposure to JPY. We may incur limited drawdown on the long trade. We are setting a relatively high target as intervention is possible, at the time of this writing it appears a temporary correction is due but the possibility of an intervention remains on tables 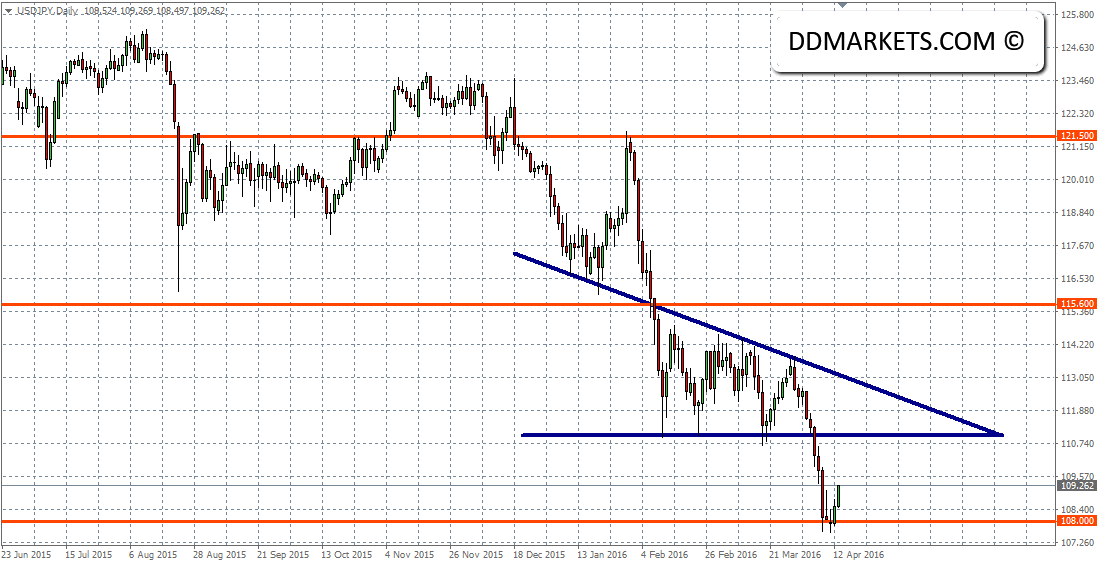 We are closing 20% of the long trade at market price.

15/04/16 UPDATE: USDJPY triggered the protective stop loss order that was shifted above the entry, ending the long trade with a profit.

We should say that AUDJPY gained over +300 pips but we are still content with our decision to opt for USDJPY. 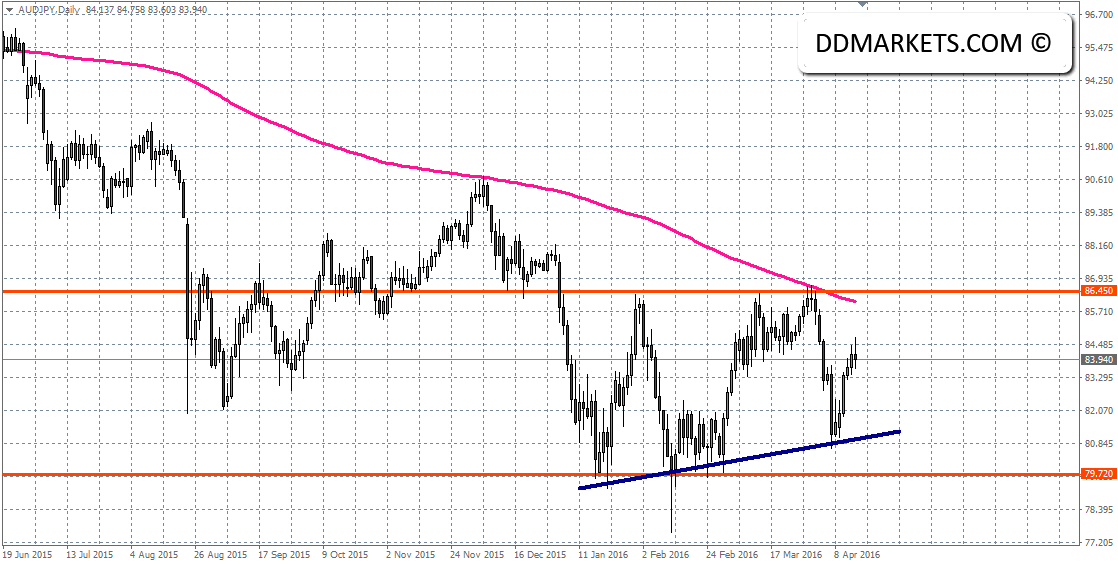 23/04/16 UPDATE: It took some time but market reports that the BOJ will take extreme easing measures in its monetary policy meeting at the end of month triggered moderate JPY selling across the board. USDJPY has acquired the original target of our trade alert but we must highlight we are no long in the trade. 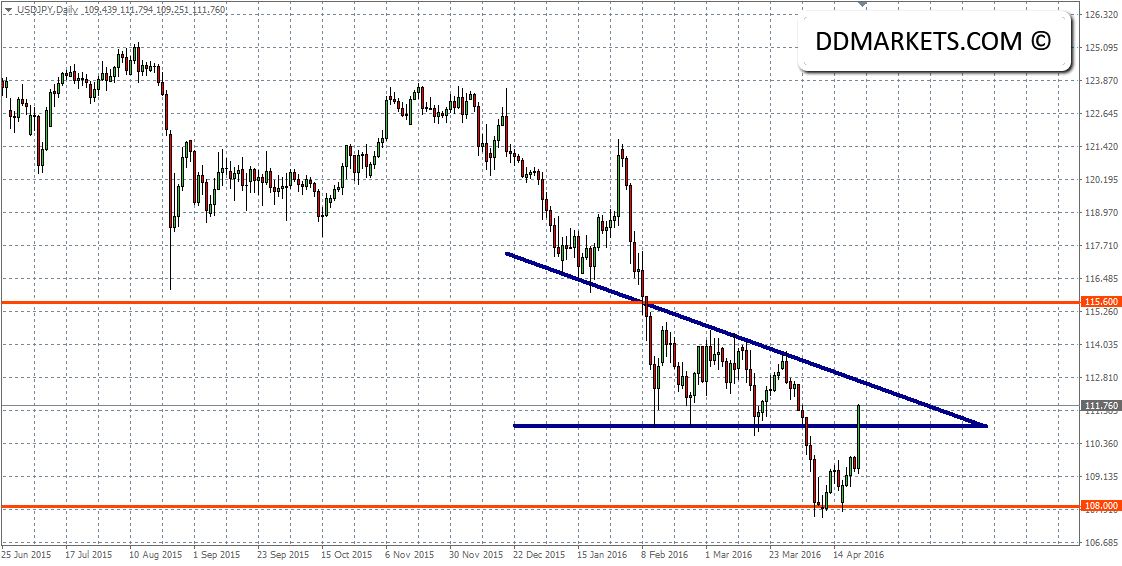 As USDJPY long trade is closed this page can now be accessed by all traders. Open trades are restricted to members only. We have been providing trade alerts in the Forex market since May 2014.

Our Japanese Yen Projections: Will the BOJ Save JPY? was last modified: April 23rd, 2016 by Digital Derivatives Markets