The Martingale is an infamous trading strategy that is used in the binary options market, extracted from the core of an average gambler into capital markets.  Its simplicity blinds the eyes of many traders across the globe that were unaware of its devastating effects until they unwillingly depart of thousands of dollars, a sum that could have been invested more wisely.

If we were to constantly bet on ‘Black’ there must be at least one time we will be correct. To ensure a profit is maintained, we would constantly double our bet after every loss until we are correct. When that moment arrives, the winnings will cover from the past losses and the remainder is our profit. Traders adopted the Martingale strategy into the binary options market, comparing the Call and Put to Red and Black.

It sounds simple and is backed by the logic of statistics, but is it really working?

Martingale in the Binary Options market

Let’s take fives trades in which a correct prediction is only made on the fourth trade:

Doubling the amount you investment a binary option until a correct prediction is made is proven to be insufficient. You can only afford to post 2 consecutive losses before making a correct prediction. If the third trade is also out-the-money it will be impossible to generate any profit by simply doubling your invested capital in the trade. Let’s try it again but this time multiply the investment by 2.2:

By multiplying the trade size by 2.2 after each loss will ensure a profit will be made once a successful trade is made. The Martingale sounds like the perfect trading strategy so far, which is why so many traders were and still are lured into the this ancient death-trap.

To counter the Martingale system casinos have set a bet limit. in the roulette. Once the limit is reached you can no longer double your bet and your “strategic technique” is now worthless. In the binary options market there is also a limit to how much you can invest in a single trade.

As traditional binary options brokers are market makers, their risk management not allow any traders to invest a substantial amount in a single trade, let’s say one million dollars for example. The trading limit sets an obstacle to martingale fans in the binary options market but does not prevent many to praise this “wonderful” technique.

To provide a fair argument, there are brokers that allow traders to invest as much as $50,000 in a single trade. If we begin trading with a $50 binary options, surely the Martingale system would work, right?

Although the following would apply to any market, we are focusing on the Foreign Exchange market as it offers the highest payouts in the binary options market. Unlike the roulette the variables are constantly changing in the Forex market, ensuring the trading conditions differ from trade to trade.

Let’s take a 60 seconds expiration. In Forex binary options one would require the marker price to be by a fraction of a pip in the predicted direction, call or put at the expiry. Unlike a roulette, each second creates new market conditions for the given trade. For example, if a European bond auction did raised its capital by offering extremely high yields, forex traders are likely to begin selling the Euro.

In such a scenario the odds are no longer 50/50 for a call or put binary option. The odds will favour a put option rather than a call option. In another scenario where the Fed raise its interest rate, which will favour moderate gains in the US Dollar (USD) against a basket of currencies will again distort the 50/50 probabilities. Aside from economic data, global events such as natural disasters or comments by market-moving officials also affect the currencies in the market.

These events are not scheduled to take place like the economic calendar and can virtually take place in any moment. If such an event occurs and the currency posts moderate gains, being caught on the wrong end of the stick may result in consecutive and substantial losses, leaving the Martingale trader bewildered by the “mysterious” forces of the market.

When dealing with 60 seconds binary options where a fraction of a pip determines the outcome of the trade, market manipulations by the broker are inevitable despite the regulations. Short-term expirations can be easily manipulated without arising the suspicion of the average trader. Bearing those variables in mind, the Martingale system is now may not appear to be the wisest trading strategy in the binary options market.

However, to provide a decent argument, what about a trader that follows the economic data and global events and places the trades in accordance via the Martingale system? If the Fed in fact raises the interest rate, why not purchase call USDCHF (for example) options and for every trade that expires out-the-money continue to double until a payout is earned.

After all, the odds are in my favour. And regarding the 60 seconds expirations, I would simply switch to a longer expiry such as 15 minutes or 60 minutes?

From being completely random, we will explore the Martingale strategy combined with fundamental analysis, executing trades based on economic figures and global events.

Let’s begin with the economic calendar. There are many occasions where the economic figure surprises to the upside (better than expected), the currency initially gains but then rapidly sold without stopping. If you have encountered such an event while trading you should nothing is random in the market.

The pricing-in may occur several days before the data is scheduled to be released or on the same day the data is due. If the economic figure is indeed a strong figure, a minor spike will be seen as traders react to the positive news before a profit realization takes place. Traders that priced-in the strong figure will seize the opportunity to close their trades and claim their profits from the market. As a result, the currency rate will begin falling rapidly.

A binary options trader that will base his or her trades on economic figures is likely at some point suffer from the “wrath” of the market as consecutive losses are posted. Believing the market will at some point reverse may not take place under such circumstances, ultimately leading to s scenario where the trader departs from the entire investment to the market.

We would like to show you a recent event that we are certain lead to heavy losses to traders that used the Martingale trading strategy in the Forex market. 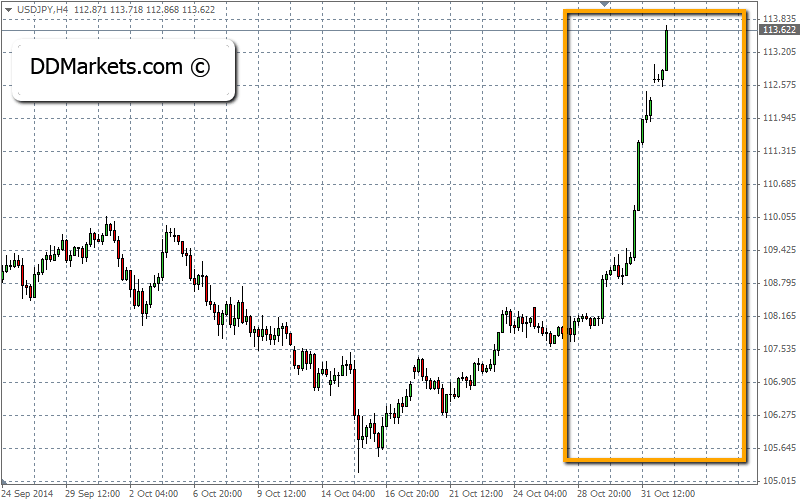 The Bank of Japan (BOJ) decided to exposed its Quantitative Easing (QE) program, which resulted in mass-selling of the Japanese yen (JPY) against a basket of currencies. Martingale traders that decided to place put long-term expirations in USDJPY where on the wrong end of the stick. Doubling the trade size while maintaining the same prediction (put) failed to deliver, resulting in staggering losses.

What about combining the Martingale strategy with fundamental and technical analysis? Technical analysis is using the historic prices of a given a currency pair in order to predict its future price movement. Surely using these techniques will deliver better results in the binary options market?

For our example we will use the Relative Strength Index (RSI), support and resistance levels.  The RSI indicates when the market is oversold and overbought. To recap, below 30.0 is considered oversold while over 70.0 is considered overbought. A support level is a certain level the price that the currency pair was unable to fall below on at least two separate occasions.

A resistance level is a price a level the currency pair was unable to rise above on at least 2 two different occasions. The RSI, support and resistance levels are drawn on the chart. If the price has reached a support level, the RSI is oversold and a recently published economic figure surprises to the upside, the odds favour the currency would continue to rise, perhaps these are best conditions for the Martingale strategy to be exercised?

No trader can succeed on every trade in any market. Despite the technical or fundamental trading strategy there will always be a time the market will trade against you despite your analysis. When a loss is incurred many trades will refuse to accept the losses and increase the trade size or the leverage to re-claim the lost capital. These psychological effects caused a numerous amount of traders to depart from their investment.

The Martingale system increases the tension of a loss by encouraging to double the trade size in the chase in an attempt to recover and profit from the previous trade. The outcome as you mat imagine is devastating.

The Martingale strategy follows the rule that historic events cannot be used to predict the future outcome, which is completely against the usage of technical analysis. If you are combining technical analysis with fundamental analysis for trading binary options,  when there is a loss why not just accept it and continue to the next trade without doubling your investment?

This will prevent you from great grief and substantial losses. If after reading the above you are not convinced the Martingale system will generate losses we will allow your trades within the next four months to speak for themselves.

There is a great difference between trading and betting in binary options. If you view trading as betting then your success rate will be similar to an average gambler. By employing a technical and/or fundamental strategy and a conservative risk management technique you may improve your success rate in global markets.

When your binary option expires in-the-money, the payout originates from traders that were unsuccessful.  Therefore, traders must continue to post losses in order to pay to the successful traders. We believe the Martingale traders’ contribution to the broker and to successful traders is immense but again, who are we to disturb the beautiful harmony in the binary options market?