Since the Swiss National Bank (SNB) has introduced it famed 1.2000 floor in EURCHF, many traders believed they have struck a gold mine. Hedge funds, banks and portfolio managers entered their market, placing their stops below 1.2000, believing the SNB will ‘protect’ their trades while enjoying (until recently) a decent interest of the long positions. However, we believe this trading strategy is due to expire.

When the Bank of Japan (BOJ) suffered from safe-haven flows that drove the Japanese yen higher against a basket of currencies before Koruda took over the reigns, the central bank allowed the Japanese yen to strengthen before finally taking action despite numerous predictions the BOJ is due to conduct a mass FX intervention in any moment.

Since  Jordan became the chairman of the SNB we failed to notice any real actions besides verbal threats, which will at some point be dismissed until the SNB will materialize its threats.

The negative rates imposed on CHF holdings is proving to be insufficient in taming Euro-Swiss and we do not believe Jordan will take any real actions for the time being. We are aware of market speculations the SNB have sizable long orders filed in the market at a lower price ahead of the 1.200 floor but one cannot battle with the forces of the market.

To strengthen our point, banks began issuing recommendations to their clients to long EURCHF as the SNB is likely to counter recent weakness by intervening in the Forex market. It is rather early to label the fresh liquidity that is being pumped into Euro-Swiss as dumb money but it is another fundamental reason why the SNB may halt its plans to intervene in the market.

The estimated size of the stop loss orders below 1.2000 is estimated to be worth billions of dollars, which we doubt FX traders will not attempt to trigger. This is a relatively dark are but it is no secret institutional traders have coordinated their trades in the past.  Due to billions of dollars involved it will not surprise us if such actions will repeat themselves in EURCHF. Fat fingers used to be common in EURCHF some years ago. As the price nears the floor we may begin seeing ‘shaky’ fingers one more time.

To concrete our bearish entry for EURCHF, the European Central Bank (ECB) is expected to commence a fresh QE program, possibly as early as September 2014. From what we have witnessed this week. EUR is likely to suffer upon the introduction of such measures. Comments from France Prime Minister Manuel Valls that the Euro is overvalued hints the hidden desire to weaken the Euro.

If or when the QE plans will be introduced heavily selling may be noted in multiple EUR pairs and crosses, including EURCHF. Combined with the new liquidity that has entered Euro-Swiss, the huge size of stop loss orders beneath 1.2000 are likely to be triggered in an abrupt spike, fuelled by Algo traders and High-Frequency Traders. It may sound far-fetched at the time of this writing but the bearish spike may cause EURCHF to plunge by over +600  pips.

We wish to capitalize over the expected event before it materializes. We are dismissing the usage of entry orders as they may not be filled due to the strength of the bearish spike.

On an intraday level there are risks for corrective gains following the losses in Euro-Swiss. but we willing to absorb such gains as the broader fundamental outlook is in our favour.  We used the weekly chart for placing to determine the location of our protective stop loss order while the target was set based on the monthly chart.  Technical analysis must be used nevertheless to determine these orders. 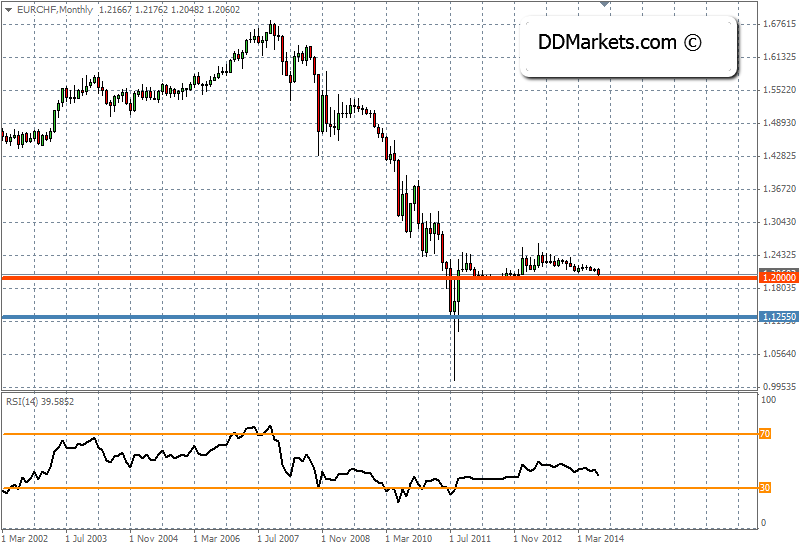 We are one of the few that believe EURCHF is due to trigger the 1.2000 floor. Are we correct in our bearish projection? We will let the forces of the market seal our fate.

Please note market updates will be posted at the bottom of this page. We will highlight that stop loss modifications may be required in accordance to market developments. You are more than welcome to leave your reply on our EURCHF fundamental analysis. Our Trades Performance is available to review all our issued trades in global markets.

On the 30th November, 2014, a referendum will take place in Switzerland, know by the name ‘Save Our Gold.’ The referendum, if passes, will force the SNB to raise it gold holdings from 8% to 20%, which could mean the SNB may have to use its fiat currencies (EUR and USD) to buy gold. In simple words,  if the SNB will use its fiat currencies the EURCHF floor is unlikely to hold, we have anticipated. Many forex traders appear to be selling EURCHF on rallies at the time of this writing.

01/09/14 UPDATE: EURCHF is trading at 1.2072 at the time of this writing. Recent gains were anticipated and do not negate our bearish outlook for the FX pair.

03/09/14 UPDATE: EURCHF is trading at 1.2077 at the time of this writing. We are maintaining our bearish outlook for Euro-Swiss as recent gains do not collide with our technical projection.

15/09/14 UPDATE: EURCHF is trading near 1.2100 following comments by one of the ECB members. We are clinging on to our short trade as the analysis was made on the monthly chart, which imply that recent gains in Euro-Swiss do not negate our bearish outlook for the FX cross.

09/10/14 UPDATE: The Swiss referendum is the fundamental trigger for the recent rally in gold and could lead in time to further losses in Euro-Swiss.

05/11/14 UPDATE: EURCHF is trading at 1.2039 at the time of this writing. We are closing 25% of the short trade at market price and shift the protective stop to the entry.

14/11/14 UPDATE: As we have successfully predicted, the SNB failed to appear in the Forex market as EURCHF is trading at 1.2010 at the time of this writing. We are closing 15% of the short trade at market price and shift the protective stop to 1.2051. Subscribe to DDMarkets.com to be notified when a new trade or a trade update is released.

17/11/14 UPDATE: We have continued to discuss EURCHF in our weekly market update.

12/12/14 UPDATE: Our short trade has held since latest August. As we have expected in our prior market research, EURCHF corrected lower following the referendum results. It is currently trading 1.2010, only ten  pips from the SNB floor. Today may be a crucial day for Euro-Swiss floor, we suggest paying close attention to the pair throughout the trading day.

15/01/15 UPDATE: Unfortunately, we were stopped out with a profit and were unable to capitalize of recent lows. EURCHF dropped 0.8502 as the SNB announced it is lifting the EURCHF floor. SNB Jordan is due to hold a press conference at 12:15pm GMT.

JOIN DDMARKETS
The SNB May Not Act to Protect Euro Swiss was last modified: July 3rd, 2017 by Digital Derivatives Markets