As we have noted on several occasions, all our open trades are positioned for US elections on Tuesday. We did update last week we will consider entering gold but there is no clean entry in the commodity. Initiating a long trade in gold is entangled with great risks. One of the currencies we have explored is the Swiss Franc (CHF), During risk aversion modes CHF tends to benefit as well as the Japanese yen (JPY) in the Forex market.

The difference between the two currencies is the fact the Swiss National Bank (SNB) has stepped into the market on multiple occasions to contain CHF strength. The most noted intervention was during the Brexit results. If Donald Trump wins the elections  CHF is likely to strengthen and force the SNB to act as they have done at the Brexit. This will require setting an entry order (buy limit) at region we would expect Euro Swiss as a result of such a scenario and the level the SNB is likely to intervene. 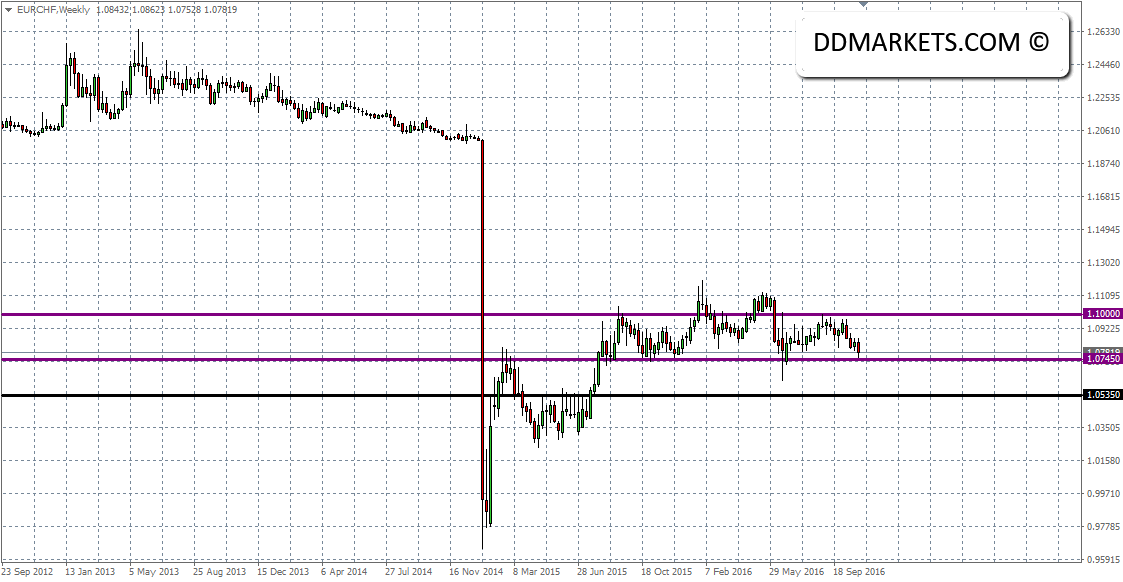 The prior spike below 1.0745 was triggered by the Brexit. Based on our analysis the spike may reach 1.0535 or slightly below 1.0535 in EURCHF weekly chart. If the SNB intervenes it the market the price should rebound by +200 – 250 pips. We should say there is no entry to short EURCHF and even if there was an entry we would rather short CHF and long the currency.

We will examine EURCHF one the market opens to determine whether the buy limit order should be modified and then issue the details via email, which would then reflect in our trading strategy for the pair on this page. The only scenario we are able to conceive that could trigger such weakness in EURCHF is a rate hike by the SNB on Monday, which could mean we are a step closer to a new floor in EURCHF. Even if the SNB hikes our entry will still be supported.

GBP enjoyed strong gains in the market following UK court decision on the Brexit. As we noted in our updates the UK can re-appeal the court’s decision in December. Although we are focusing on GBPJPY this may very well apply to most GBP pairs and crosses in the Forex market. 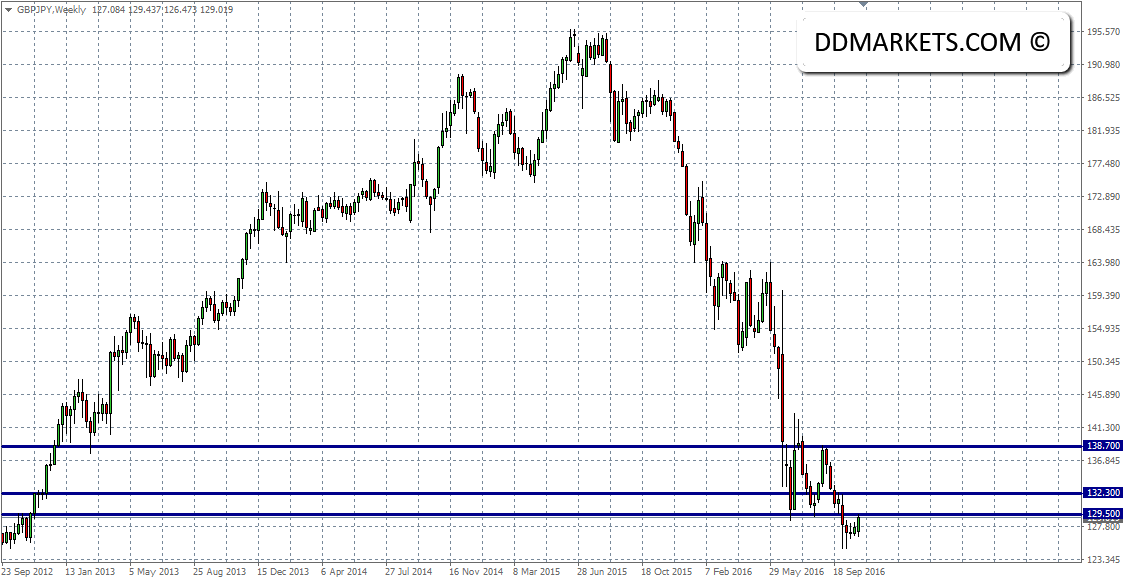 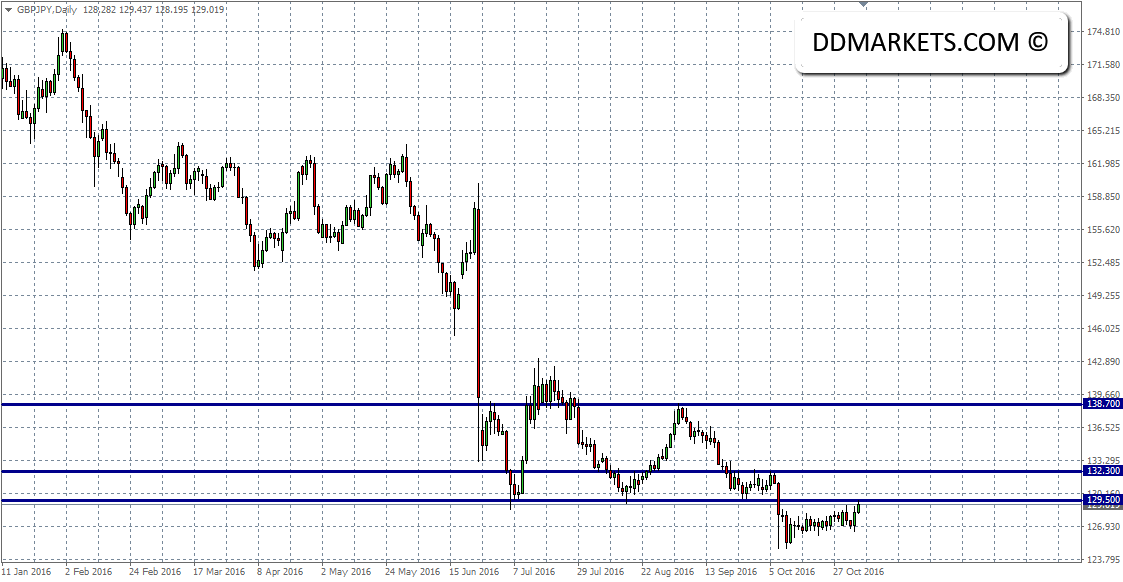 The current highs are a re-test of the breached support at 129.50. As tempting as it may appear to be this entry is optimal for stop hunting operations. The entry is likely to be picked up by algorithms and numerous stops are likely to be placed between 129.50 – 132.30. This is a relatively wide range even for GBPJPY. Based on the hourly chart GBPJPY could re-test 129.50 but we cannot determine whether the market will attempt to trigger stops above that resistance. We are considering an entry order above 129.50 unless a significant bullish gap occurs at the opening of the market.

We will issue an update on the signals via email after the opening of the Forex market.

The gap is insufficient to take the trade at market price. We are setting an entry order (sell limit.

This is our trade for the US elections on Tuesday or if the SNB decides to hike rates any time before the elections as stated in the strategy.

We have been anticipating a bearish reversal in the indices but were unable to capitalize over the last sell-off. The recent recovery in global indices provided us with a short entry but due to the size of the stop we refrained from entering the trade. As we noted the Dow continued to gain it has substantially reduced the required stop. 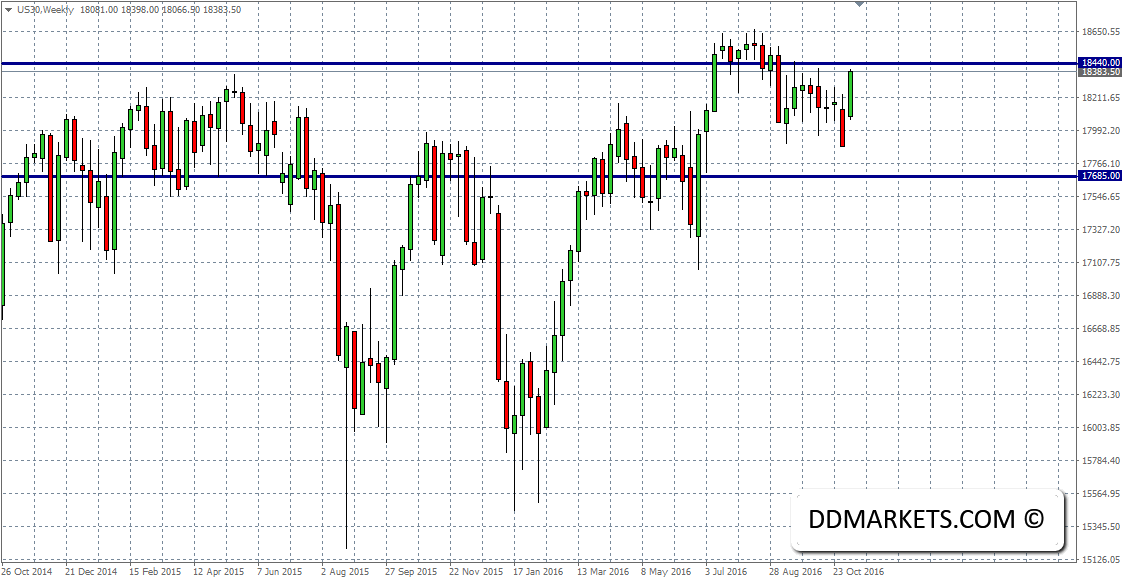 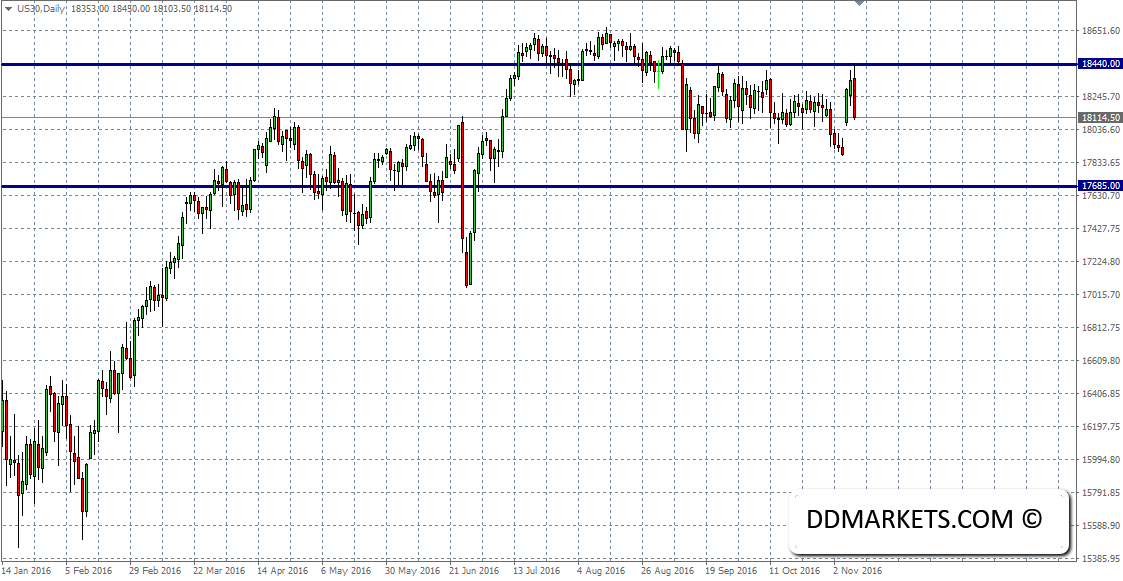 We are closing 50% of the short trade at market price and shift the protective stop to the entry.

Please note when an update is sent via email it takes several seconds to be delivered. The price was significantly lower when the update was received, which is why the chart is showing 18,114. 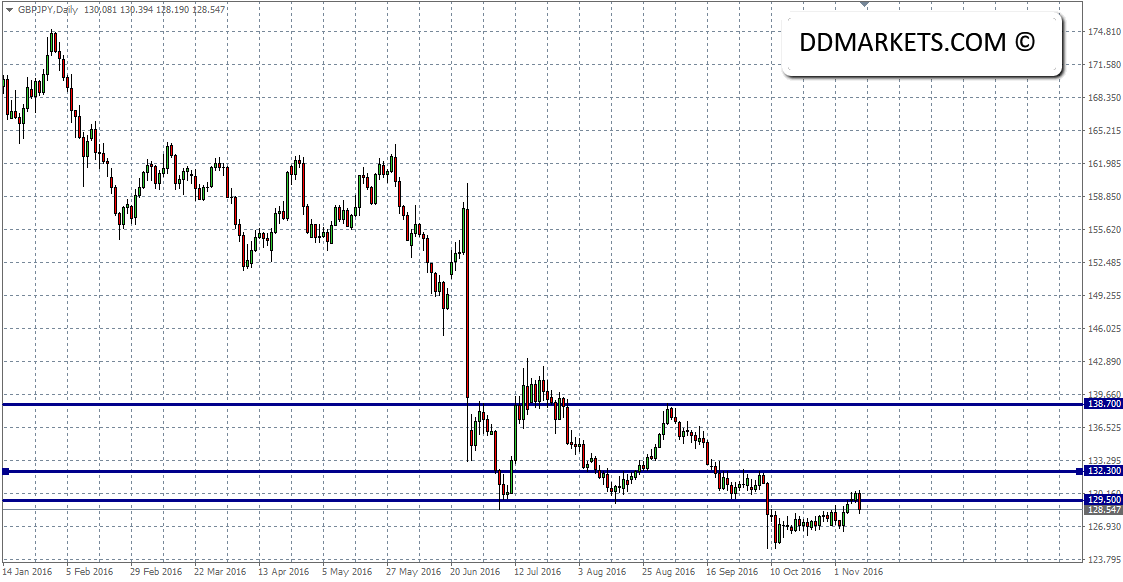 We are closing the short trade at market price. GBPJPY reached 126.70 before rebounding but we made a decision to close the trade. 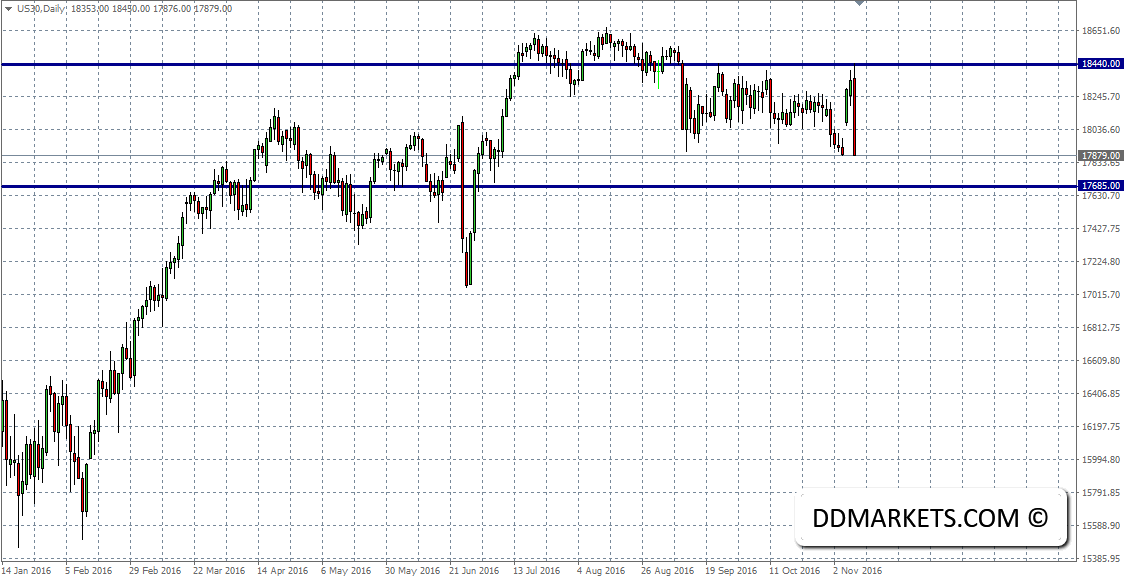 We are closing the short trade at market price.

We should say that the take profit was later triggered in the market. Some of our traders chose to remain in the trade but were uncertain the selling will continue. 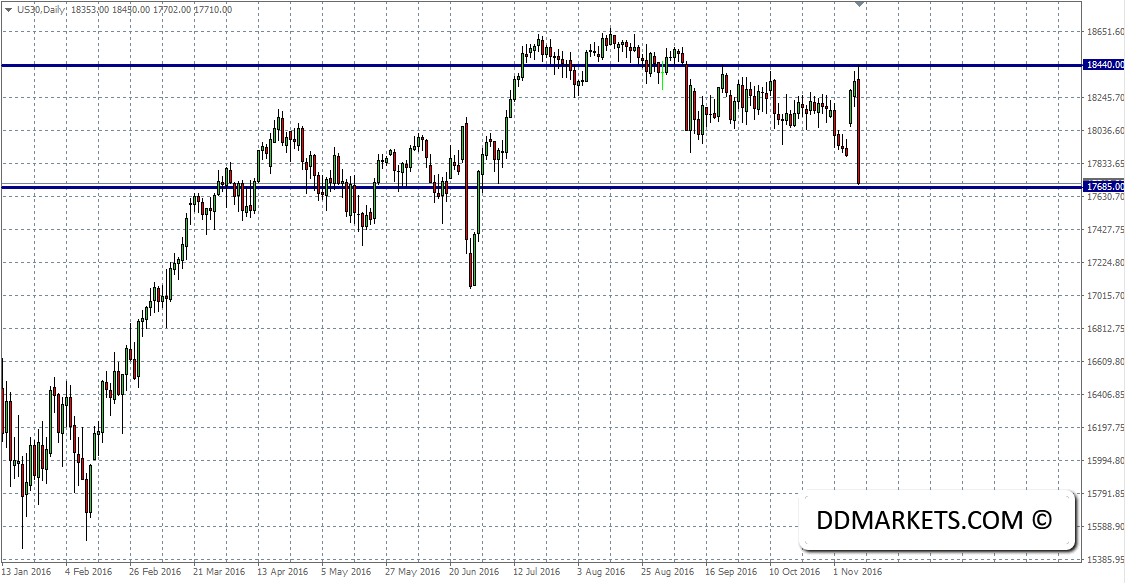 After the take profit was triggered we have seen a full recovery in the index.

We have cancelled EURCHF buy limit order as the SNB prevented steep losses in Euro Swiss. Overall we have finished GBPJPY and the Dow (DJ30) with a decent profit.