The mass Japanese yen (JPY) selling that took place on Friday, 22 April, 2016 took many traders by surprise. Reports that the Bank of Japan (BOJ) will opt for more easing measures in its upcoming monetary policy meeting caused many traders to cut their JPY exposure, triggering strong gains across all JPY pairs and crosses in the Foreign Exchange (Forex) market.

This contradicts BOJ Kuroda remarks that further easing may not weaken the local currency. We therefore suspect the BOJ was the original source of these reports, conducting a litmus test on forex traders in order to note the market’s reaction to the news. A similar test was also conducted by the European Central Bank (ECB) several months ago. While the possibility of a direct forex intervention remains on the table, if the BOJ will expand its easing measures the currency correlations in the Forex market are likely to be disturbed.

The Japanese yen is one of the currencies that enjoys safe haven flows a risk aversion modes in the Forex market. The new easing measures, if taken, may dent JPY safe haven flow. It will be interesting to observe whether the Swiss Franc (CHF) will reclaim its status as a currency the benefits from these flows, which if turns out to be the case may force the Swiss National Bank (SNB) to act.

Naturally, after such strong gains in the market profit-taking is bound to take place eventually prior to the BOJ monetary policy meeting in the early hours of Thursday morning. As the market already priced-in the probability of further easing measures, if the BOJ does not exceed the market expectations or should it disappoint in its easing measures the Japanese yen is likely to strengthen against a basket of currencies.

We should highlight that we also have a similar entry in GBPJPY but we would rather avoid shorting GBP unless we note the required stop in GBPJPY is tighter than USDJPY. 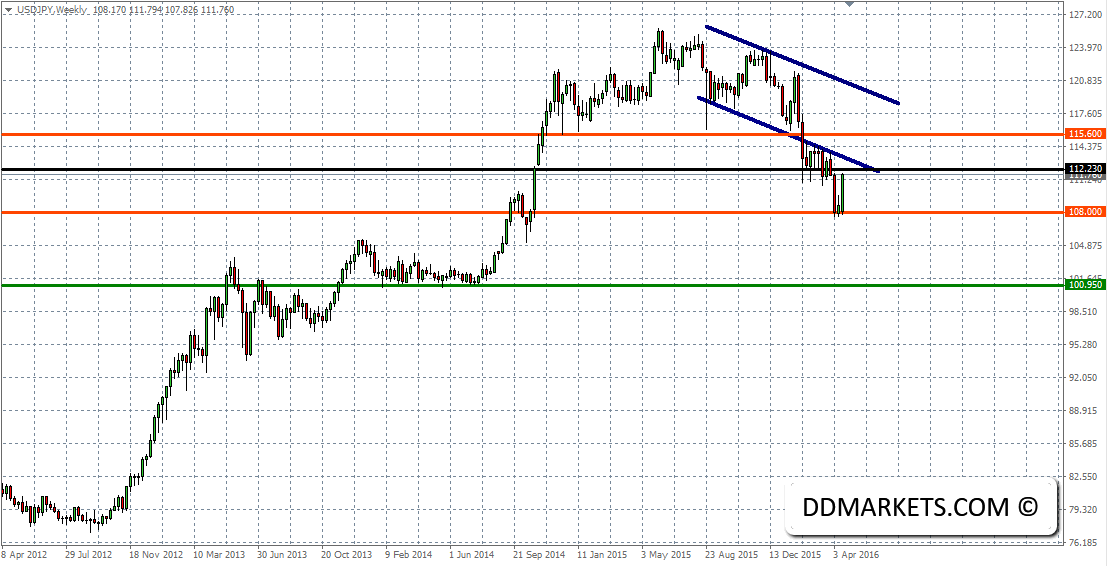 USDJPY recovered off the 108.00 support level that served us in our past USDJPY trade alert that was issued earlier this month. The weekly chart top Head-And-Shoulders (H&S) is still in place while the recent gains are merely corrective based on the H&S technical structure. Unfortunately there are multiple entries USDJPY may dip lower form and resume its downtrend until the H&S objective is maintained as highlighted on the chart.

There are 2 key fundamental events this week, the Fed and the BOJ monetary policies. The Fed will only release a statement on Wednesday without a press conference. The current market expectations is a rate hike in June 2016 but there is no guarantee the Fed will indeed meet the market’s expectations.

As one of these events may be the trigger for USDJPY weakness, the decision that must be made is whether to opt for the trade before or after the FOMC statement assuming a technical entry is provided beforehand. If USDJPY gaps higher at the opening of the Forex market, preferably over +100 pips we may reconsider an entry. Even if an entry is not taken today we will continue monitoring USDJPY to see if an entry will be provided throughout the week.

29/04/16 UPDATE: Our USDJPY projections were fairly accurate. Although we did not have a firm technical entry as we required a higher price in order to enter, Dollar yen was heavily sold in the market as the central bank refused to cut rates or expend its asset purchase program. Profit-taking triggered the heavy selling across all JPY pairs and crosses.

Although we did not enter USDJPY some of the traders that follow us decided to execute a short trade in USDJPY prior to the Bank of Japan (BOJ) monetary policy based on the strategy we presented and capitalized over selling in the Forex market. We will be looking for lower levels in order to capitalize over Dollar yen recovery, which will be presented in a different page when a technical entry will be available.

As USDJPY trading strategy is no longer applicable this page can now be accessed by all traders. Open trades and relevant intraday strategies are restricted to members only. We have been providing trade alerts in the Forex market since May 2014.