Greece impact on the global market is weakening at the time of this writing although we more volatility is expected as outlined in ‘The Future of Greece’ webinar that was presented on 13 July, 2015 by Matti Williamson.  This week we are focusing on the New Zealand Dollar (NZD). Last week Fonterra, the largest dairy products exporter based in New Zealand announced it is slashing jobs in an effort to combat with falling profits and weak demand from China. This could very mean the Reserve Bank of New Zealand (RBNZ) may slash rates this week in its monetary policy meeting. Forex traders priced-in the possibility of a rate cut, which is why the Kiwi was heavily sold against a basket of currencies.

There are multiple strategies that can be used for the Kiwi, we have decided to opt for a long trade due to the fact is technically supported and it is more than likely traders that have shorted NZD may cut their exposure as we near the RBNZ monetary policy meeting, which will in turn lift NZD against a basket of currencies.

What caught our attention last week is the positive divergence that was developing in the daily chart. We had the ability to issue a trade alert on Thursday’s close but decided to wait for the weekly close as a confirmation. Aside the positive divergence in the Relative Strength Index (RSI), the price has reached its support line that strengthen our views for corrective gains in NZDUSD. The 21 Daily Moving Average (DMA) acted as a firm resistance for several months and may prevent moderate gains in the Kiwi. However, as the market is expecting the RBNZ to slash rates, in a scenario where the central bank will leave rates on hold moderate gains are likely to be seen across all NZD pairs and crosses.

We should highlight that we are currently anticipating corrective gains that may be limited to the RBNZ monetary policy meeting. The best scenario would be if the RBNZ will remain on hold  and allow the People’s Bank of China (PBOC) aggressive easing measures to affect the market. We remind you that the RBNZ raised rates in order to combat the housing bubble in New Zealand and has intervened in the Forex market to devalue the Kiwi against a basket of currencies. The corrective gains may be not be immediate, which means holding the trade until Wednesday (the very least) when the RBNZ monetary policy is scheduled to take place at 21:00 GMT. Holding a long trade in NZDUSD means we will be enjoying from positive interest at the rollover.

Setting the target has been quite difficult. The natural target would be 0.6778, however, if the positive divergence unfolds we should be expecting the price to break above 0.6778, possibly towards 0.7200. As you already know we cannot place exaggerated take profits without a technical confirmation. We are therefore setting the take profit at the next minor resistance at 0.6830

We are observing other currency pairs but at the time of this writing we do not have a clean entry. Should an entry be provided you will be notified via email and the trading strategy will be displayed in the ‘Trade Alerts’ section.

20/07/15 UPDATE: NZDUSD is trading at 0.6580 at the time of this writing as the positive divergence kicked in. We are anticipating further gains as key intraday resistance levels were violated but choose to close 10% of the long trade at market price.

We are shifting the protective stop to the entry and close 30% of the trade at market price.

22/07/15 UPDATE: As we near the RBNZ monetary policy meeting we are reducing our exposure to NZD.

NZDUSD is trading at 0.6614 at the time of this writing. We are closing 10% of the long trade at market price.

22/07/15 UPDATE II: NZDUSD is trading at 0.6571 at the time of this writing. We are closing 20% of the long trade at market price. The reason why we are not exiting the trade is because the intraday time frames suggest corrective gains are possible. We are aware slippage is a possibility, which if occurs any losses are likely to be absorbed by eurusd long trade and the partials we have already liquidated.

22/07/15 UPDATE III:  NZDUSD posted moderate gains but not due to the 25bps rate cut but due to the fact the central bank removed the warning of a strong Kiwi from the statement, which triggered a bullish spike in NZDUSD. We were debating whether to close the trade at market price but rely on the technical end of the market as presented in our trading strategy for the pair. 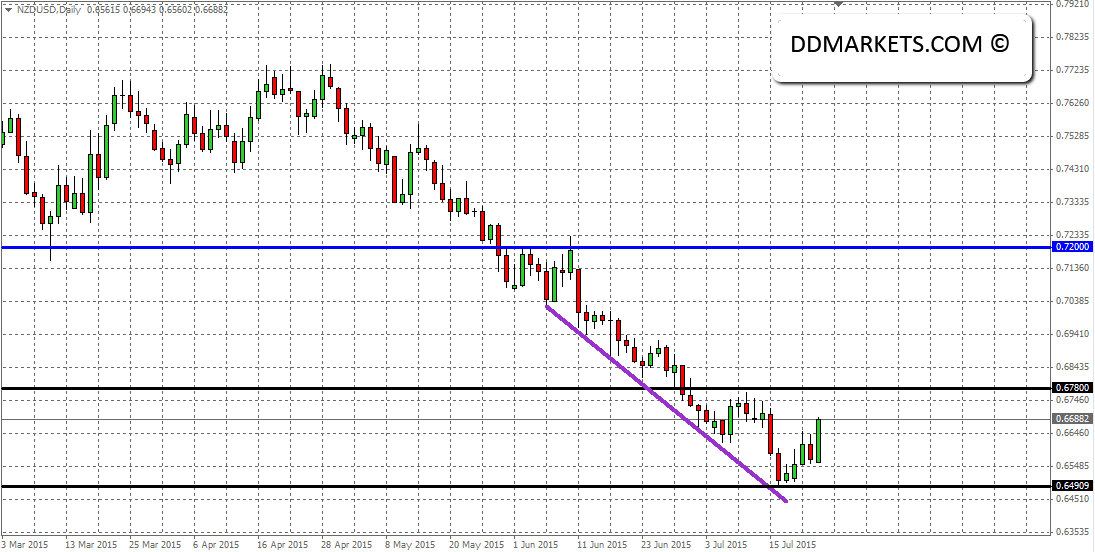 We are closing 10% of the long trade at market price and shift the protective stop to 0.6540.

28/07/15 UPDATE II: In light of recent gains in NZDUSD the possibility for reversed H&S have increased. This means the currency pair may rise between 30 – 60 pips before reversing lower. 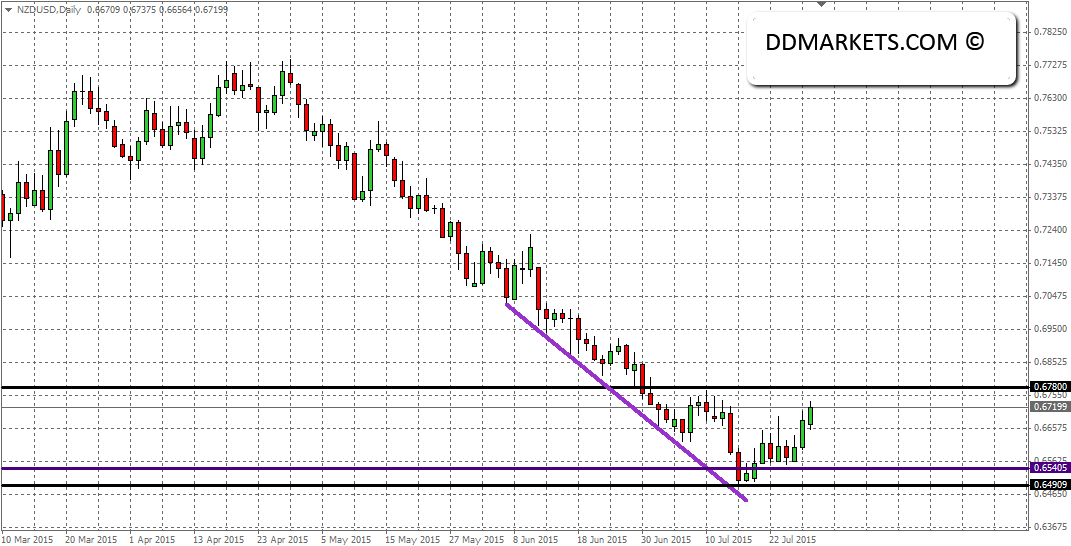 Due to the FOMC statement and the fact we already have a long other trades running we decide to close the remaining trade at market price with approximately +200 pips profit.

As NZDUSD trade is closed it can  now be accessed by all traders. Open trades are restricted to members only. We have been proving trade alerts in the Forex market since May 2014.