GBP and the UK Referendum

Our recent attempts to long GBP were unsuccessful. Although the charts indicated GBP is due for a moderate recovery we were unable to contain the market volatility as evident from the weekly charts. Unfortunately, the entries in GBPNZD and GBPAUD were missed and we no longer have the ability to join the uptrend in those crosses without the usage of heavy stop loss orders.

We initially believed the gains will be triggered due to the polls and possibly Britain choosing to remain in the EU. In light of recent events the trigger may also be as a result of delaying the upcoming referendum, an option we can only consider now following the murder of one of the British MP’s.

We will soon elaborate why we prefer entry orders as opposed to a trade at market price. If we enter at market price there is nothing preventing a re-test of the lows as we have seen last week. 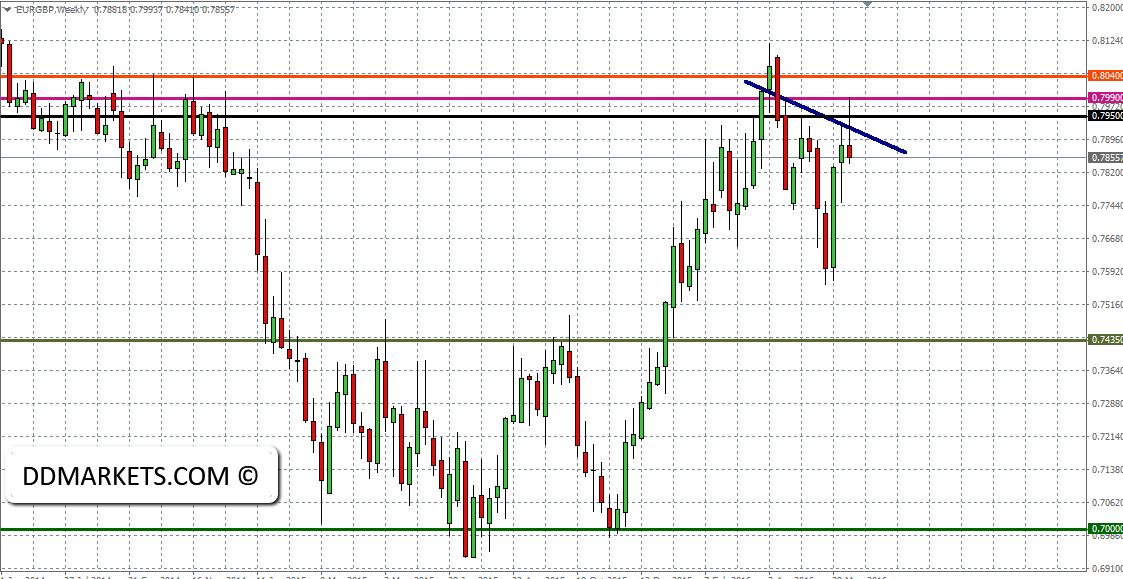 The price has affirmed top Head-And-Shoulders (H&S) on the weekly chart. The recent dip higher provides a fairly clean entry to the market. The upper shadow of the most recent weekly session cleared numerous stops that attempted to short EURGBP before reversing lower. 0.7435 is seen as the immediate target while 0.7000 is the objective of the top H&S.  On many occasions a re-test of the high  is seen before a resumption of the downtrend. The location of the protective stop loss order must be above 0.8040 regardless of the entry price. If we were to initiate a short trade at current levels it means exercising inflated stop while incurring a potential drawdown of at least +100 pips (approx.). We are likely to opt for 0.7950 but we will wait for the opening of the Forex market.

EURGBP has until the end of the week to trigger our entry even if EURGBP gaps lower. With that being said. if we note the downtrend as resumed without a re-test we must re-evaluate our position on EURGBP. 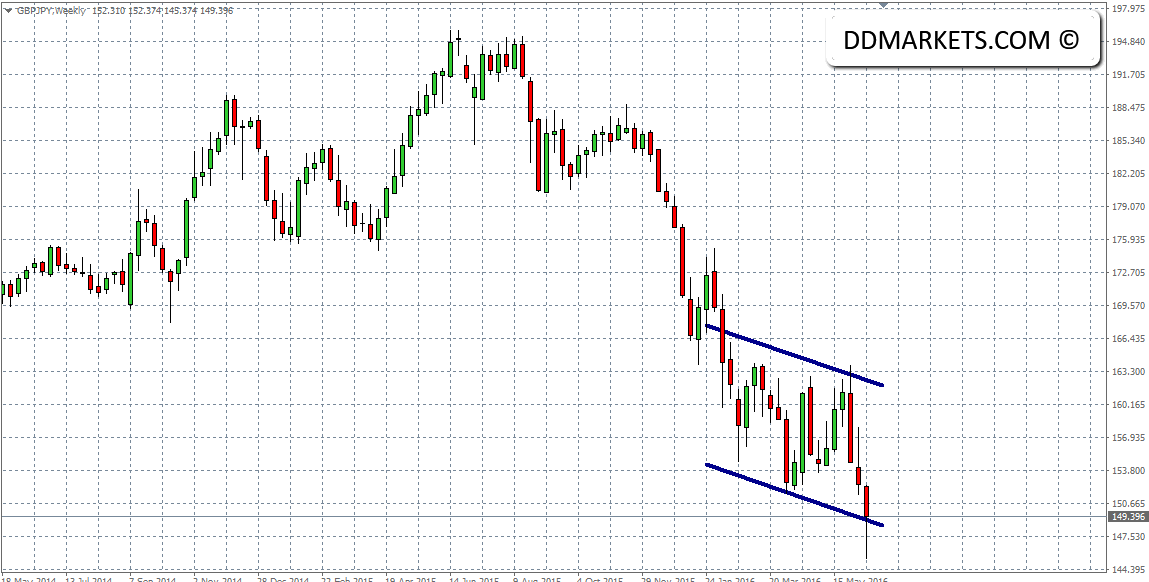 As you may note the weekly support was not invalidated despite the market attempt to break below. As opposed to EURGBP there is a stronger possibility for corrective gains to emerge without a re-test of the lows but we are fairly hesitant in re-entering GBPJPY. We will assess the currency cross after the opening of the market. 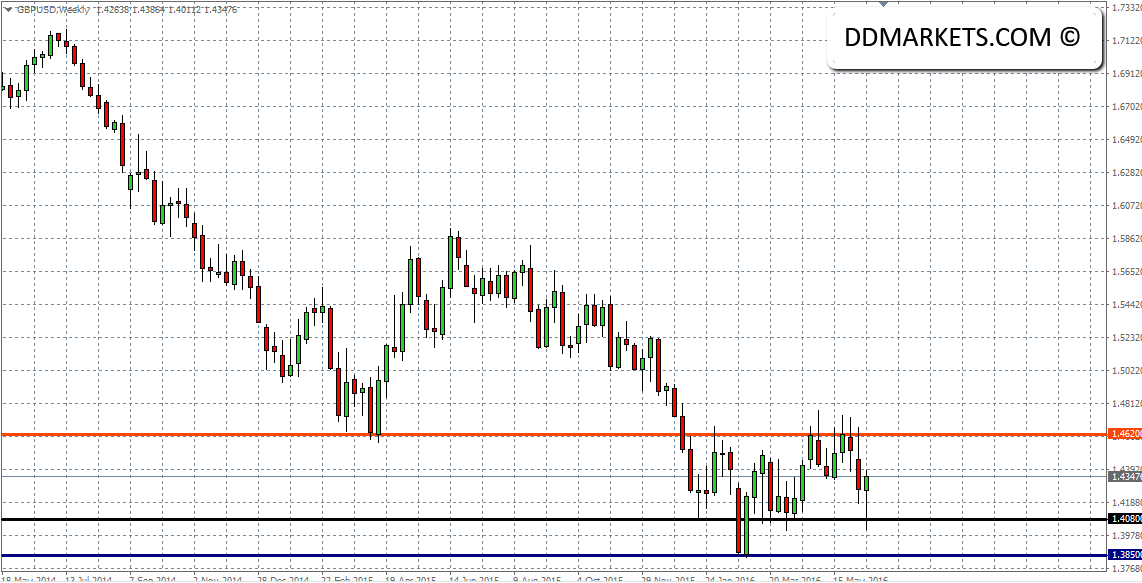 The reversed H&S is still in place. Similar to EURGBP, a re-test of 1.4080 may be seen before a resumption of the uptrend. A break above 1.4620 may lead to moderate gains in GBPUSD over the medium-term. Entering at current levels requires a hefty stop and the ability to absorb a potential re-test of 1.4080. Similar to EURGBP, an entry order may be more appropriate than entering at market price.

We have missed the entries in GBPNZD and GBPAUD. We can use an intraday entry but by doing so leaves us vulnerable to the intraday volatility of the crosses. GBPJPY may extend its gains without a re-test due to a weak JPY rather than a strong GBP.

What may be seen is a short-lived spike that may trigger our entry orders. If we sense the market is unlikely to re-test the lows/highs we may opt for an entry at market price but it will not be done at the opening of the markets. GBPJPY has the potential of correcting without a retest as well as GBPCHF but we would like to see the opening rates before making a final decision.

GBP was able to correct most of its losses that were seen last week at the weekly close but we did not survive the selling pressure. As we know the referendum (delayed or not) is likely to be the trigger, which is why we are continuing to focus on GBP.

As GBPJPY is expected to gap higher by approximately +170 pips, considering a long trade at market price is out of the question.

21/06/16 UPDATE: Both orders were cancelled as GBP extended its gains against a basket of currencies. Following the strong gains that appeared in a single session we have a strong reason to believe GBP is subject to moderate weakness and we are seriously considering the possibility Britain will exit the EU. We have alerted all subscribers GBP strength has stalled and we are now executing a long trade in EURGBP.

We are using the 4hr chart to enter GBPUSD. This is a fairly risky maneuver but we would rather avoid placing trades on Thursday. GBPUSD may re-test 1.4725, which is a fairly limited drawdown. This is an early entry so this re-test may take place. As we are aware the frequency of intraday spikes may increase we cannot use a standard stop. 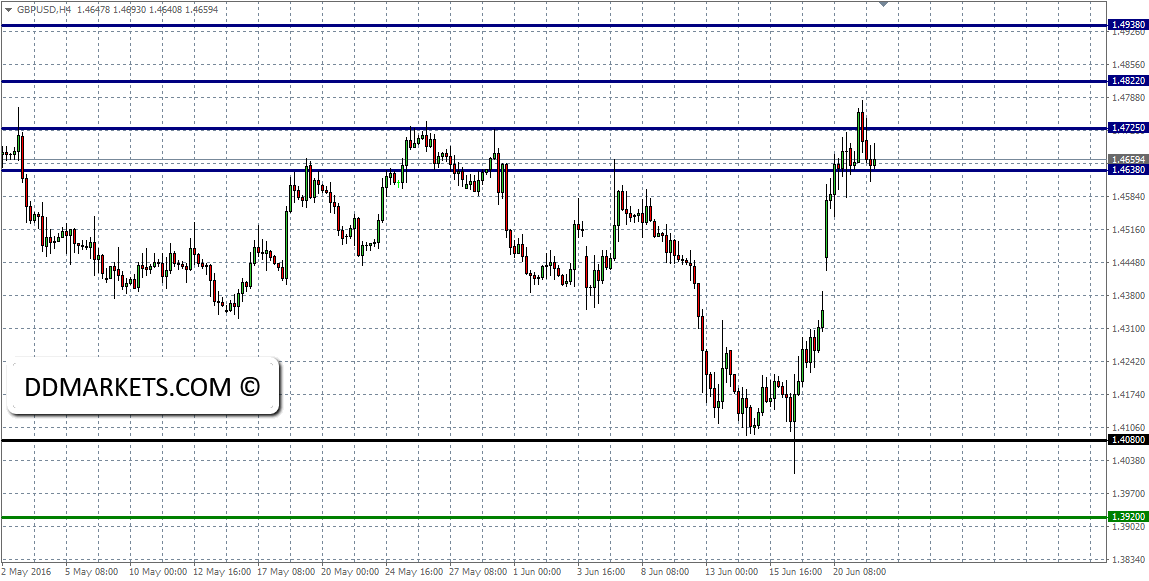 22/06/16 UPDATE: We are shifting the protective stop in GBPUSD to 1.4996. The stop is shifted based on the monthly chart and to lessen the vulnerability to intraday spikes. This was a tough decision but it had to be made.

GBPUSD is trading at 1.4711 at the time of this writing. A new poll may be released in approximately 45 minutes.

23/06/16 UPDATE: The last poll of the day (excluding the private exit poll as we do not know if it will be published) is by YouGov that is scheduled for release at the daily close. We have noticed unusual behavior around the daily close in GBP pairs and crosses. In order to protect ourselves from the possible reaction as we are certain you have noticed the spikes we have been referring to for some time we are temporarily adjusting the protective stop in GBPUSD.

We repeat this is temporary and we are likely to readjust the stop after the poll has been released. We are shifting the stop to 1.5037.

23/06/16 UPDATE II: We are including GBPUSD monthly chart to further understand our entry to the currency pair. 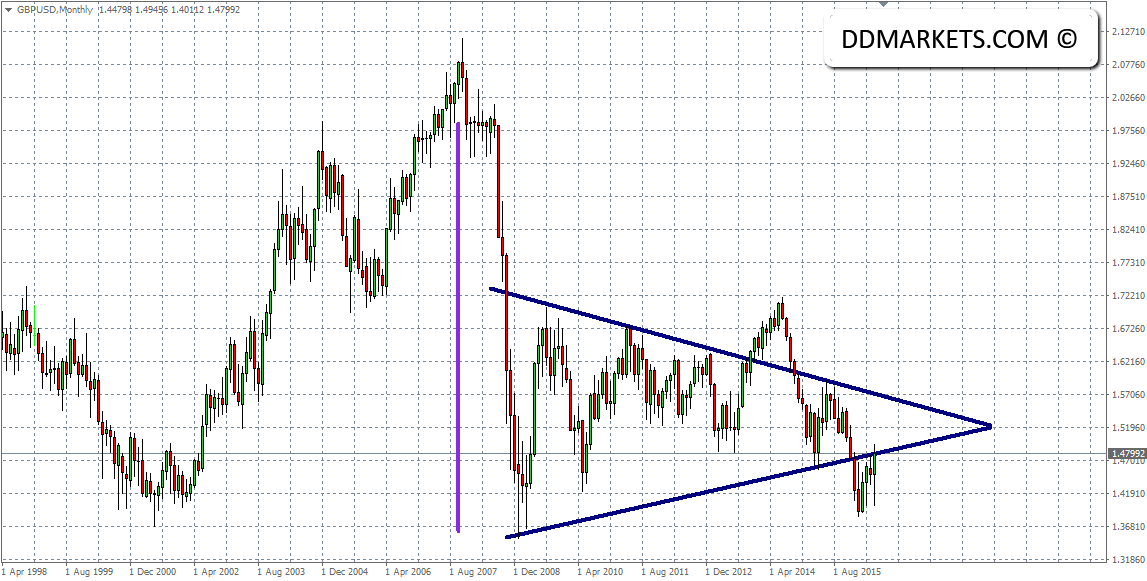 GBPUSD broke below a key support level in January 2016. What we are witnessing is a re-test of the breached support, now acting as resistance. Usually we would require to wait for the monthly close but the UK referendum outcome may be the trigger for the weakness. The purple line is potential target of the weakness, which is approximately +6,000 pips. Our take profit is quite odd when compared to the potential weakness but we are aware central banks may intervene in the market as the Bank of Japan (BOJ) stated during the European session.

We have successfully predicted Britain were heading an exit form the EU. 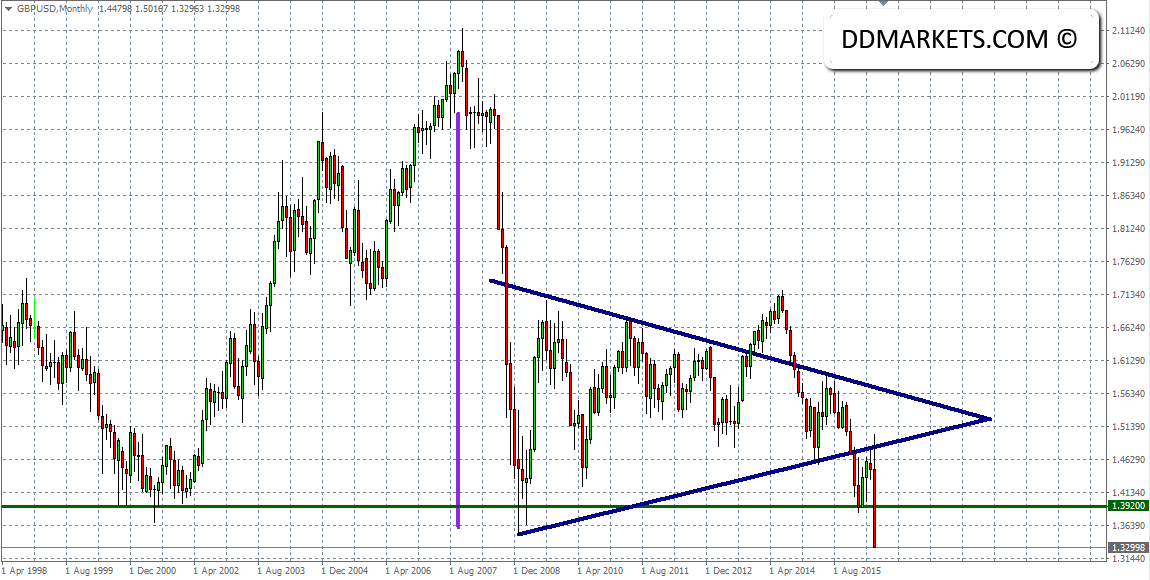 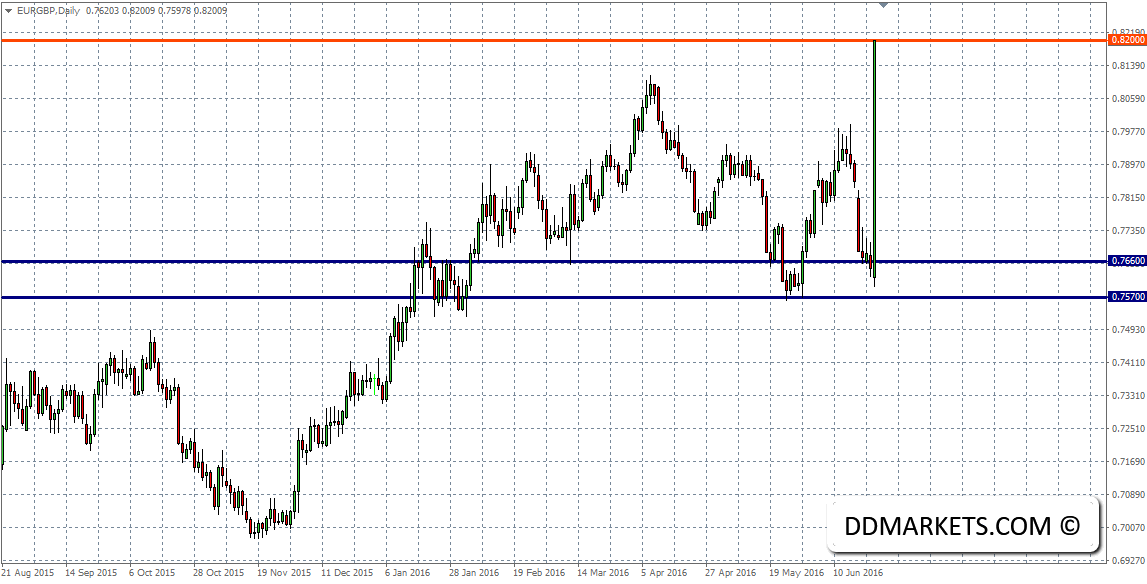 26/06/16 UPDATE: We have successfully predicted the Brexit and were able to realize decent profit by shorting GBPUSD and holding a long trade in EURGBP. We have also predicted GBP gains prior to the UK referendum, however, due to the spikes that were seen in the market we were unable to capitalize over the expected gains.

We have exited GBPUSD at 1.4008 and EURGBP at 0.7949 on concerns central banks may intervene in the market. We have been updating our subscribers throughout the night until it became clear Britain was heading for an exit. The initial bearish reaction was seen as Sky news revealed the Ipsos Mori poll showed 54% for remain on Tuesday and only 52% on Wednesday. The YouGov poll that  released at 21:00 GMT was a re-poll and our subscribers were already updated via email it is likely to be inaccurate. When Sunderland official results were released, showing a large margin (over 60%) for a brexit, GBPUSD shed over +500 pips in matter of seconds.

We suspect the private exit poll that was funded by banks and investment firms suggested there will be a brexit. However, it appears the private exit poll was inconclusive. When an overwhelming majority was seen in Sunderland algorithms kicked in as well as High Frequency Trading (HFT) algos, which explains the heavy selling that was noted in GBPUSD.

We also revealed to our subscribers that the betting odds were manipulated by wealthy individuals or banks. 62% of the bets were placed on a Brexit and only 38% were on remain. However, several bets on remain were extremely large (some over GBP 300,000), which forced the bookies to lower the odd for remain, providing a false image that there is a minimal chance (less than 20%) for Britain to exit the EU.

We have issued multiple updates via emails and chose to document only several updates on the website. We did incur a limited drawdown on GBPUSD due to our entry but it is a typical drawdown for a trade that was derived from the monthly chart.

Traders that went to sleep and did not see our updates that were issued deep in the Asian session woke up to discover both trades triggered the take profit orders. This is one of our top predictions for 2016.