The BOE and the Fed Summary

On Thursday 3 MPC members voted for a rate hike due to a rise inflation, which is mainly blamed for the weak currency (GBP). The BOE did state prior to the UK referendum it will intervene in the market if necessary but no action was taken to the best of our knowledge.

The brexit negotiations are due to commence tomorrow (Monday), the Queen’s speech, which was also scheduled to take place on Monday was postponed to Wednesday. The Queen’s speech speech on Wednesday (under the assumption it will not be rescheduled) may have a significant impact on GBP pairs and crosses in the Forex market.

Theresa May is then expected to fly to Brussels to attend the EU summit that will take place on 22/23 June where the brexit will be discussed as well as relocating EU agencies in the UK. It is one of the most significant events this week. We are likely to note unusual volatility in global markets starting Wednesday until at least the end of the week.

Although the center of attention this week may be on GBP, we would like to briefly recap the Fed monetary policy. The central hiked rates on Wednesday with an indication to normalize the balance sheet this year. The next rate hike is expected in December although it may greatly depend on the effects of the brexit negotiations on the market.

We we discussed throughout last week, we are expecting GBP to firm against a basket of currencies in the FX markets. We attempted a long trade in GBPCAD, which we were forced to exit with a minor profit (approximately +90 pips). It is considered as a minor profit due to the volatility of the cross.

We were also monitoring GBPCHF as we updated via emails last week but the cross did not provide us with an entry as it continued to extend its gains in the market. The only cross we may be able to enter is GBPAUD, which we also discussed in the prior weekly update. 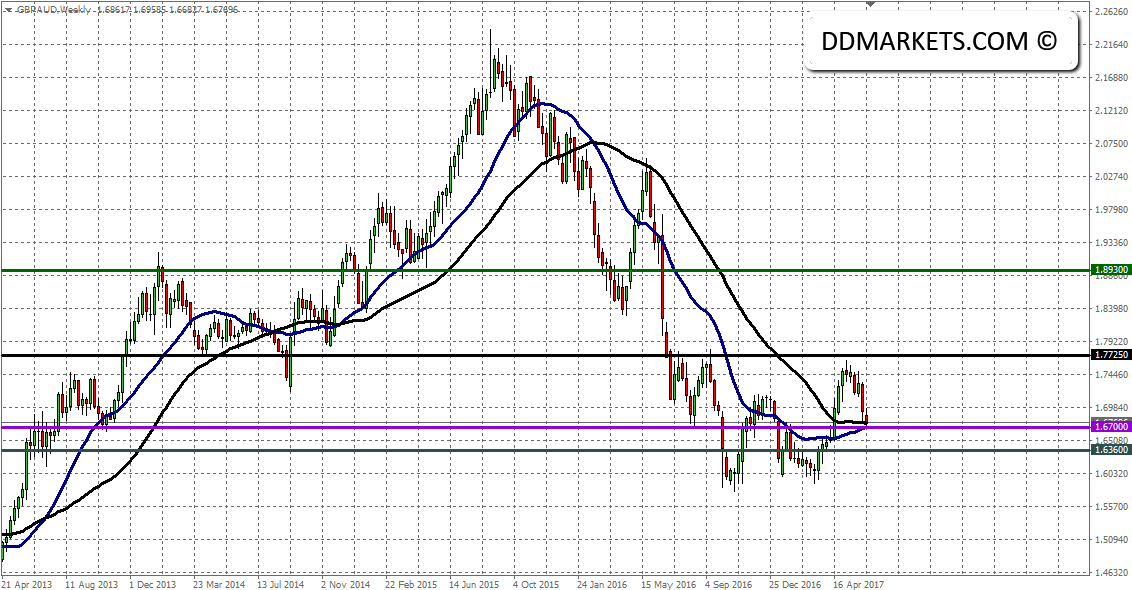 We have mentioned the Moving Averages (MA’s) last Sunday and we noted they were successfully tested by the market. Although it appears to provide a firm entry. we suspect numerous stops are layered between 1.6360 – 1.6700. This means unless the protective stop is layered beneath 1.6360 we are prone to stop hunting.

This is a +500 pips stop (approx.), we do not exercise such stops. What we may do is opt for a tighter stop with the an intention of re-entering GBPAUD should 1.6360 be tested by the market. There are no indications a dip towards 1.6360 will indeed materialize but it must be anticipated based on our experience.

A tight stop may still exceed +200 pips due to the volatility of the cross, which is tolerable but we must also note our exposure in GBPNZD. As it is a weekly entry we must also initiate the trade under the assumption it may be carried into July (from a technical angle) while absorbing the negative interest at the daily rollover.

From a fundamental angle the Queen’s speech (on Wednesday) may be the trigger. Carney’s speech on Tuesday (which was rescheduled due to the Grenfell Tower fire) is also deemed as an important event as he may discuss the exchange rate.

In regards to AUD and NZD, the RBA monetary policy minutes is due to be released on Tuesday while the RBNZ monetary policy is scheduled for Wednesday although it is likely to be after Queen’s speech. The RBNZ affirmed in its last meeting it is not forecasting to raise rates until 2019. We are uncertain at the time of this writing when the Queen’s speech will be held on Wednesday, in 2015 it took place at 11:30am (BST).

We also have the option to focus on EURNZD and AUDNZD as discussed last week, however, we would like to see the opening price before outlining the strategy. As these are crosses we will wait for the spread to normalize before initiating the signals we derived from the charts. 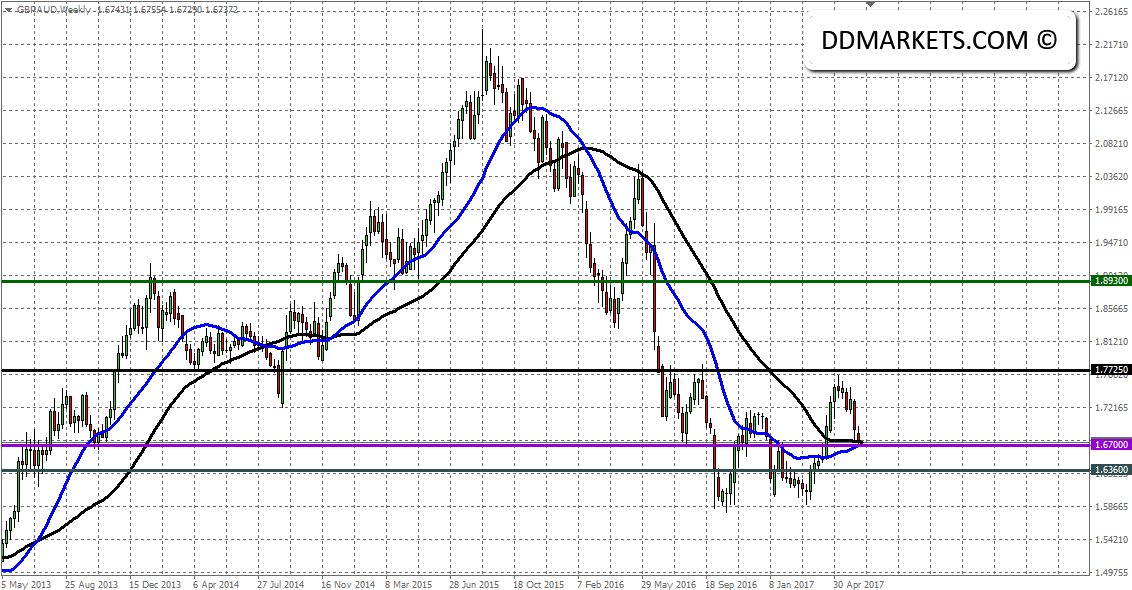 Price range: If the price is above 1.6790 and you have not taken the trade consider reducing the trade size.

Note: Increasing our exposure to GBP is a risk we are willing to take. The key support is 1.6700. As we wrote in the strategy stop hunting may take place but not guaranteed to materialize. If the stop is triggered by the market we may re-enter at a lower price.

We are aware of the negative interest, the trend both trades (GBPAUD and GBPNZD) may be defined by the end of the week.

14/06/17 UPDATE: GBPNZD is trading at 1.7526 at the time of this writing, we are closing 10% of the long trade at market price as a precaution. Based on the 4hr close there is a fair probability the price may re-test the daily low either prior or following the Fed monetary policy.

We will have to widen the stop but we will wait until we near the top of the hour to understand the required adjustment (stop was later shifted to 1.7360). 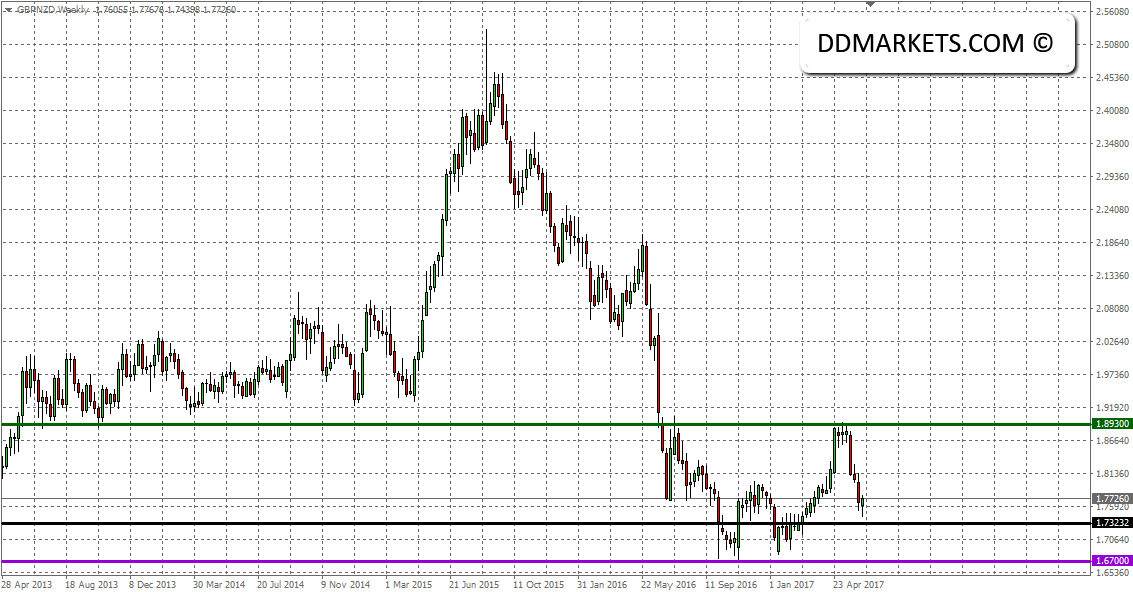 The partial closure is made to reduce the holding costs of the long trade due to the negative interest at the rollover.

21/06/17 UPDATE: GBPAUD is trading at 1.6764 at the time of this writing, we are closing 20% of the long trade at market price. The partial closure is intended to lower the holding costs of the long trade.

22/06/17 UPDATE: GBPNZD entry is based on the weekly chart. As opposed to other entries there is a cluster of support levels in the chart. We initially layered the protective stop at the upper range of the cluster and then shifted the stop to lower range.

The price has tested the cluster on multiple occasions. Only a weekly close may provide further details on the strength of the support levels we have used as the entry is still valid. GBPNZD is a volatile cross that tends to trade between 150 – 200 pips per day.

Should we remain in the trade by the end of next week and no progress is made we may begin downsizing the position. In an event GBPAUD posts significant gains that are not reflected in GBPNZD we may also downsize the trade.

Should the price trade at current levels prior to the weekly close we may require to widen the stop to withstand the spread widening on Sunday. We would rather not be in such a position but we may have little choice.

Bearing in mind GBPUSD range (caused by rate hike expectations from the BOE, the recent Fed rate hike and the brexit negotiations) we are shifting the protective stop to 1.7330. This is the second time the stop has been adjusted, which was not done since our GBPUSD short trade prior to the UK referendum.

Regardless of this adjustment the stop will have to be temporarily widened prior to the weekly close should GBPNZD continue trading at current levels.

We are not deterred by losses and have no intention of becoming attached to GBPNZD. The entry is still valid at the time of this writing, we are simply adjusting the position to the current market conditions. Adjusting the stop was a tough decision but it had to be made. 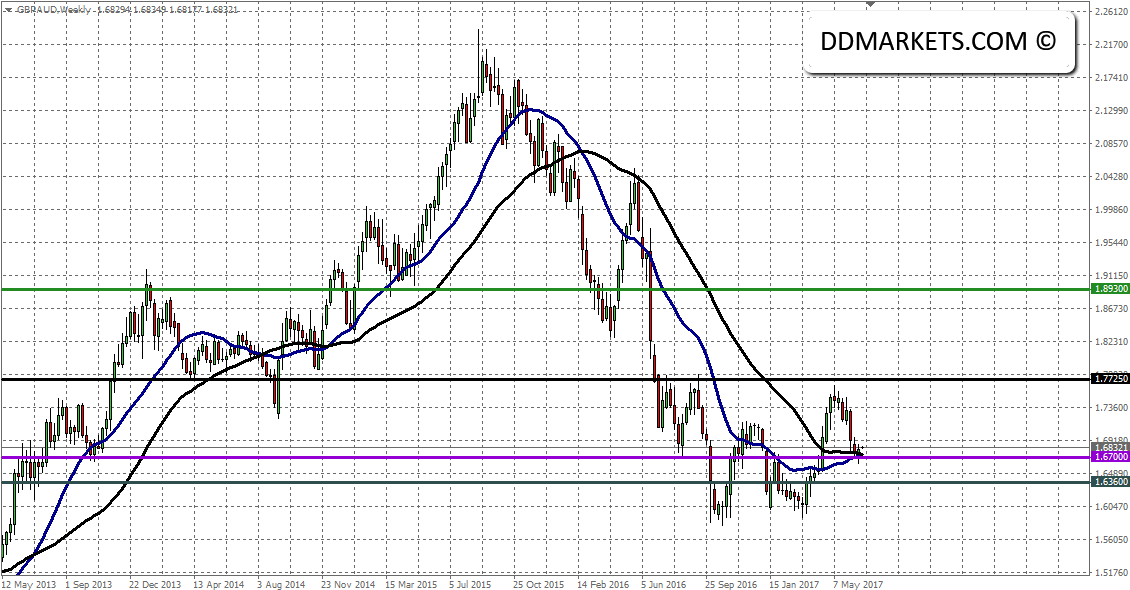 We are closing 10% of the long trade at market price and shift the protective stop to 1.6720.

27/06/17 UPDATE: China industrial profits rose +16.7%, which sent AUD and NZD higher against a basket of currencies. GBPAUD triggered the protective stop as a result, we intentionally shifted the stop higher to limit our GBP exposure. We ended the trade with a minor loss.

We are aware GBPAUD temporary weakness was also triggered by a stop hunt that was taking place in other currencies, once the stop hunt was over the price spiked higher but we were no longer in the trade. The stop had to be shifted to limit our market exposure.

29/06/17 UPDATE: This is another tough decision we decide to make. The interest at the rollover for GBPNZD is too high for our liking, this trade can be kept open until August rather than 21 days.

We will focus on NZDUSD, which has a more tolerable interest at the rollover but it will not be today unless a significant price movement takes place. We may re-enter GBPNZD but once we are convinced the odds for a range-bound activity are low. 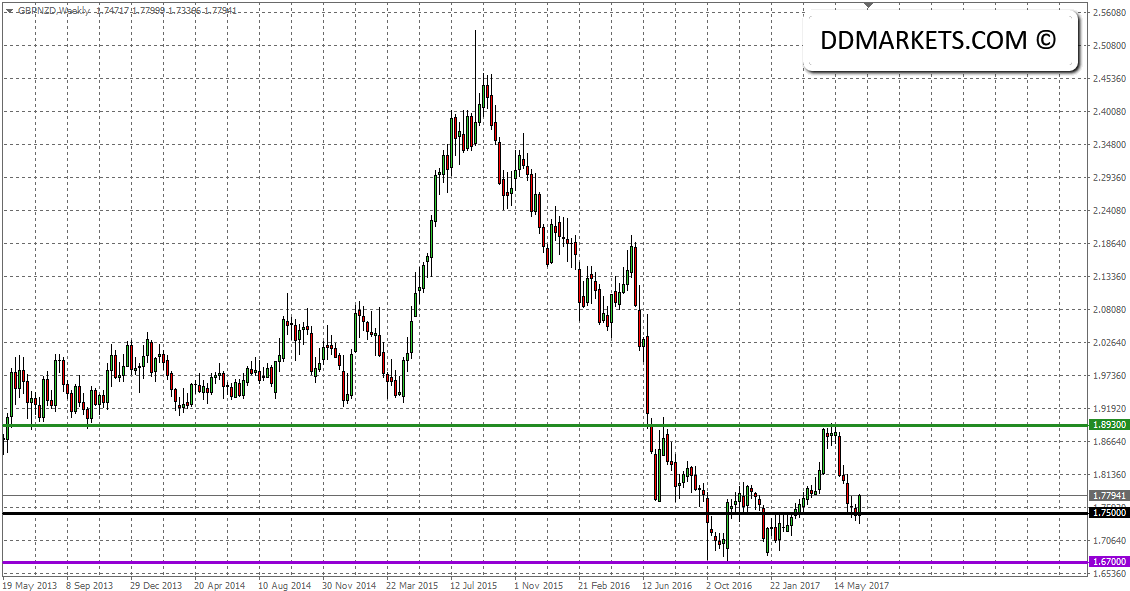 GBPNZD is trading at 1.7794 at the time of this writing, we are closing 30% of the long trade at market price and shift the protective stop to the entry. We will exit the trade prior to the daily close, we are waiting to see whether steel tariffs will be introduced in today’s session.

29/06/17 UPDATE II: GBPNZD is trading at 1.7819 at the time of this writing, we are closing the remaining partial at market price.