After analysing numerous currency pairs we decided to continue focusing on GBP pairs and crosses.  We do have the ability to re-enter EURCAD (which was our prior trade alert) but as we stated on multiple occasions, only in rare scenarios we would re-enter trades that were stopped out even if the protective stop was above the entry as it was with EURCAD.

We have discovered 2 potential entries in EURGBP and GBPCHF. We are fond of initiating a short trade in CHF pairs and crosses as the Swiss National Bank (SNB) is still active in the markets.

EURGBP uptrend has been established since January, 2016. The price has re-tested the 0.7926 support level, which suggests the support may contain any further attempts to drive EURGBP lower. The weekly chart affirmed a classic Japanese reversal pattern known as bearish engulfing. The charts may appear to conflict each other at first but even if a bearish engulfing is affirmed the price tends to retrace higher in the following sessions, either negating the reversal pattern or retracing lower following the corrective gains.

The ‘temporary’ recovery in EURGBP may result in approximately +200 pips. The European Central Bank (ECB) monetary policy meeting on Thursday may seem as the potential trigger we would rather see a weak GBP combined with a strong Euro then waiting for the ECB to lift EURGBP higher.

It is a complex entry as we targeting a short-lived recovery in EURGBP that could develop into a moderate bullish retracement but we are anticipating the Euro to gain grounds against a basket of currencies.

EURGBP trade alert will be sent via email and then updated on this page after the opening of the Forex market once the spread stabilizes.

We have deiced to initiate a long trade in EURGBP. The price may re-test 0.7926 (nearest support) so we must bear in mind this retracement may take place. There is no guarantee such a re-test will take place. 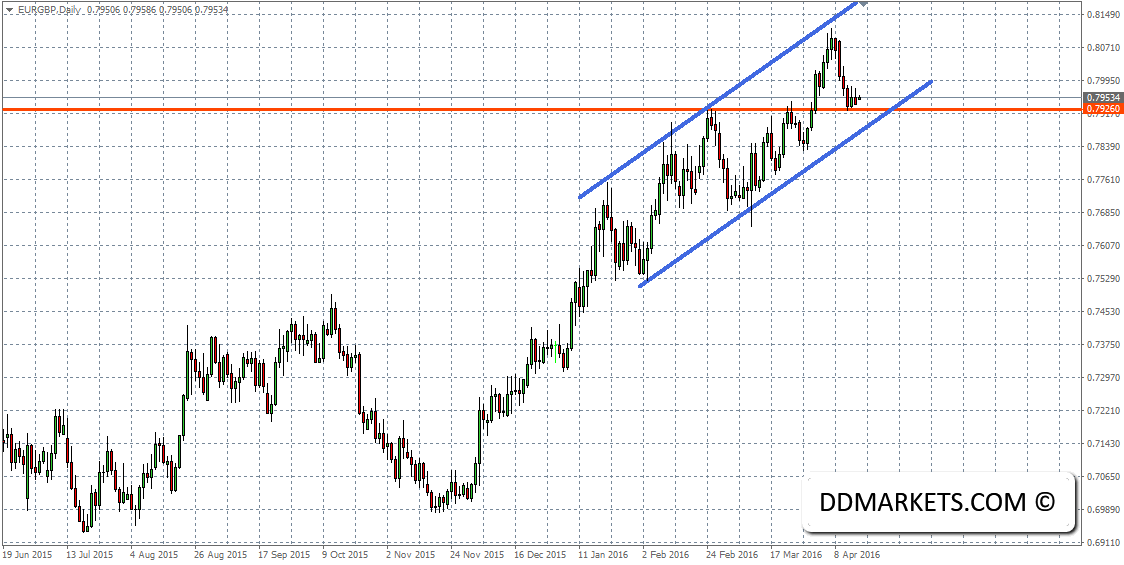 18/04/16 UPDATE: EURGBP continued its retracement lower until the daily close. To recap, there is a monthly entry to long GBPUSD as you recall from our GBPJPY trade alert but we did not expect the gains to take place this week.

As EURGBP closed below 0.7926 we cannot ignore the possibility of further selling in the pair. To invalidate the breakout we hope EURGBP will close above 0.7938 at Tuesday’s daily close. 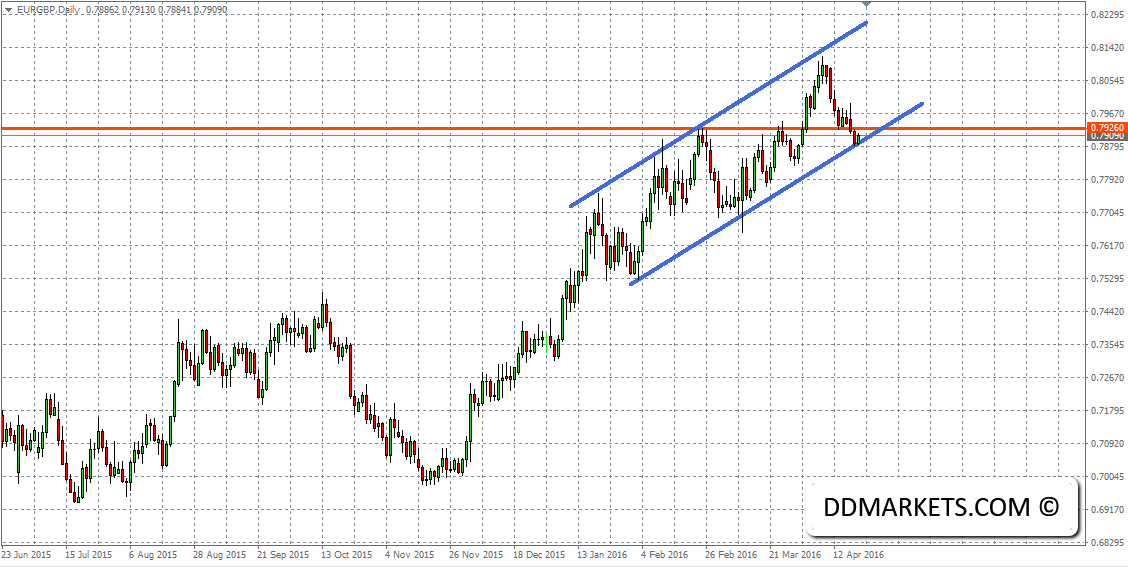 We still require a greater distance from the market ahead of BOE Carney testimony.

19/04/16 UPDATE II: We have decided to initiate a long trade in EURCAD as the price is re-testing the 100MA. We have used this strategy in our prior EURCAD trade alert. 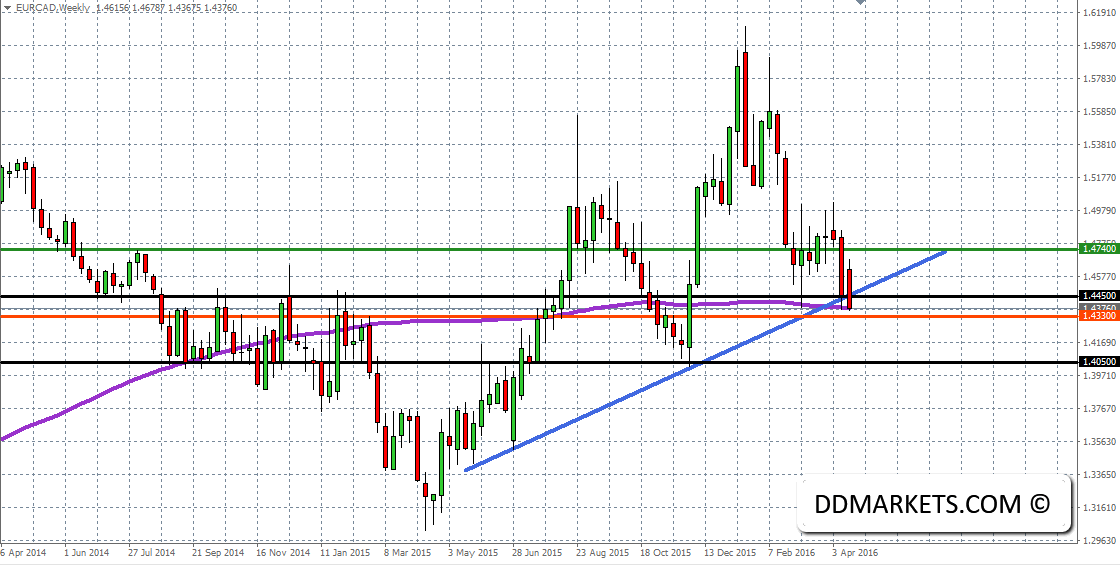 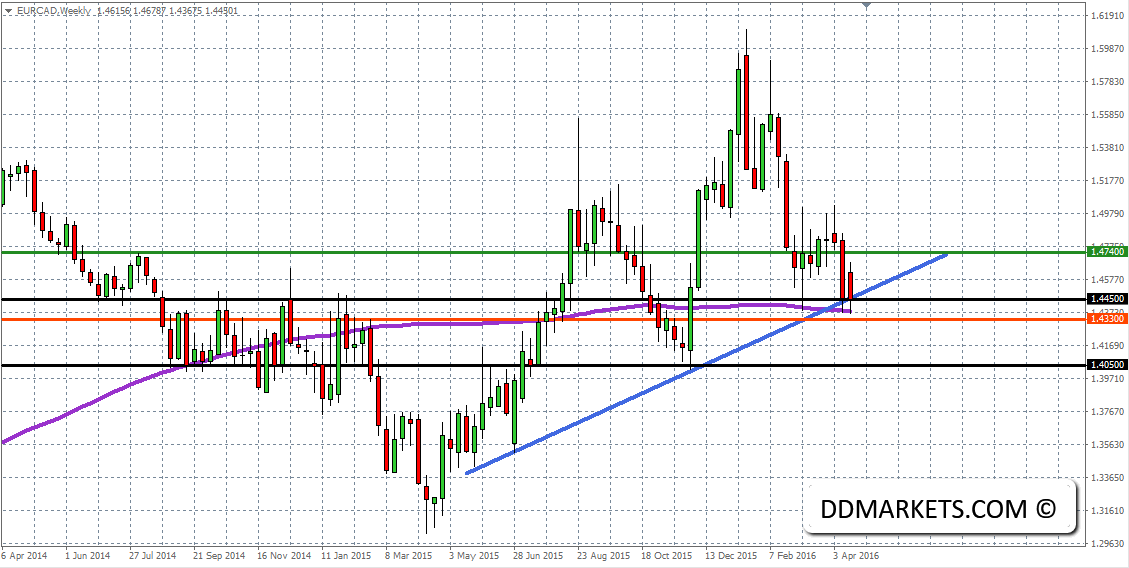 we are closing 20% of the long trade at market price. We required a greater distance from the market in order to shift the protective stop to the entry.

20/04/16 UPDATE II: EURGBP broke below the support. We are preparing for the possibility the market will trigger the protective stop loss order. We are in the hands of the market.

20/04/16 UPDATE III: EURGBP triggered the protective stop loss order, ending the trade with a loss. The trade was initially in a profit but the gains were reversed until the stop was triggered.

We didn’t shift EURCAD stop to the entry as a retracement was possible. The key data for EURCAD is now on BOC Poloz testimony that will take place later in today’s session.

20/04/16 UPDATE IV: As opposed to EURGBP we are still close to the entry due to the volatility of EURCAD.  We have used a relatively tight stop for EURCAD, the market is not far from the protective stop loss order. We hope to attain a sufficient distance from the market ahead of Poloz testimony. Until then it is mainly crude oil that will be setting the tone. As it was the last trading day before the settlement (crude oil contract) moderate gains were seen in the commodity.

21/04/16 UPDATE: EURCAD is trading at 1.4340 at the time of this writing. The good news is that the gains are due to EUR demand rather than traders closing their short trades. This however does not necessarily suggest the uptrend will continue as it will be down to the Mario Draghi. 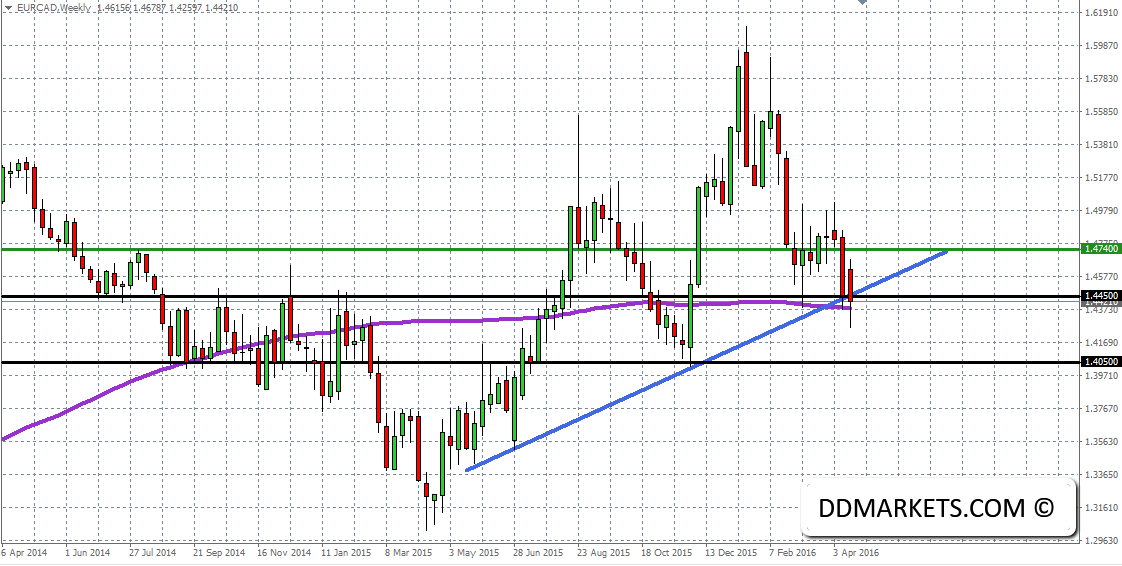 It is truly amazing how the reporters are trying to weaken the Euro with their questions. The push higher in all EUR pairs and crosses were as a result of Mario Draghi affirming the EURUSD exchange rate is not part of the central bank’s policy.

21/04/16 UPDATE III: EURCAD triggered the protective stop loss order that shifted to the entry. We have liquidated partials with a fair profit, overall we are pleased no loss was incurred over EURCAD as it traded several pips from the stop earlier today.

As EURGBP and EURCAD trades are closed this page can now be accessed by all traders. Open trades are restricted to members only. We have been providing trade alerts in the Forex market since May 2014.

The Weekly Update: Trading EURGBP Ahead of the ECB Meeting was last modified: April 22nd, 2016 by Digital Derivatives Markets