ZuluTrade was first introduced to the market in 2007 by a couple of business partners in Greece, Athens. ZuluTrade aims to provide a peer-to-peer network where one trader is classified as the signal provider generates the trades in the market and the rest simply follow.

It is commonly known as mirror trading. ZuluTrade initially focused on the Foreign Exchange market (also known as Forex), partnering with the largest brokers in the financial industry. Recently, ZuluTrade have unleashed their latest social trading in the binary options market.

Same concept is applied where one trader provides the trades and the rest copy in real time. The mirror trading is fully automated using ZuluTrade’s algorithm integration with the binary options trading platform.

For the benefit of the traders that were unaware of ZuluTrade until now, we would first like to explain how mirror trading works in the spot Forex market. A trader leader is eligible to join the list via a live account or a demo account.

In  the past, demo traders joined ZuluTrade and recklessly entered the market with no stops or a blown-out-of-proportion stop loss orders (over 500 pips) to ensure the trade is closed in a profit regardless of the drawdown. Traders were seen to have over 90% success rate by adopting such mind-blowing stops and to our great surprise it was not spotted by numerous traders until they have began following the signal provider.

Aside the trading psychology that pressurises the trader, ZuluTrade’s system opened a door to ulterior motives, which only adds a greater pressure to the trader.

Signal providers are compensated through the spread of their followers, we would imagine it is 0.5 a pip. Let’s take two signal providers, Michael and Steve, both have the same amount capital following them:

On the other hand, Steve earned +100 pips at the end of the month but through 50 different trades. This means he will earn a greater commission than Michael:

To summarize, it turns out that Michael that profited +400 pips will earn $5 while Steve that profited +100 pips will earn $250. Naturally, Michael who earned $5 has a choice to make, continue placing one trade a month with consistent profits while earning $5, or, place multiple trades a month and risk the consistent profits, but in return a higher commission will be awarded. Needless to say, Michael will most likely increase his trades in the market as no one in the financial industry works for free.

When a trader begins in ZuluTrade he or she are unlikely to have any followers. Once the followers come in, the trader is pressurised to show results and at the same time fight off the temptation to over-trade in order to earn a greater commission. When there are losses, which by the way are completely natural in the Forex market, the signal provider tends to panic and begins over-trading.

We believe you can already guess the outcome. To fuel the psychological battle, signal providers will not be paid unless they profit by the end of the month. As fair as it sounds, if the trader sees he is in a small loss at the end of the month he is likely to over-trade or over-leverage to ensure the trade is in a profit so the commission can be earned.

To make the scenario even worse, scalping or what we call ‘dollar-hunting’ is very tempting, the forbidden fruit. If a trader has followers and he is already in a profit, why not open a few traders, close them after 5 minutes, small profit or loss are irrelevant as the profit from the spread has already been plucked. Remember that the signal provider is paid from the spread. The bigger trading volume, the bigger the commission.

Another pressure is applied from the followers. Unfortunately, a large number of the followers do not understand how to trade. They have expectations that profit should be made on a daily basis, losses are unacceptable. The trader’s sees the feedback from his followers after a weak performance, which will only cloud his decision-making in future trades.

These pressures are immense and were the cause for the constant change in the top signal providers in ZuluTrade. The good news is that ZuluTrade did take action at a certain stage and set a maximum of 700 pips loss per trade and the drawdown was not to exceed the profit in pips.

ZuluTrade, being a financial business after all must maintain its profitability ratio. One of the options is to favour scalpers or day traders that place multiple positions on a daily basis. ZuluTrade earns a commission from the spread (it charges the broker of the followers, which rolls it on to the followers) in which they split with the signal provider.

We are certain there are decent traders in the network but the pressures will eventually  lead almost every single one into the depth of the abyss.

As this is a new system that is offered by ZuluTrade we can understand there may be several bugs at the beginning but we were shocked at the ranking algorithm’s performance. Before we will proceed please note there are no spreads in binary options.

We therefore believe the signal provider is compensated via a certain percentage of trading volume. We would assume it is  anywhere in between 0.3% – 0.7%.  This of course keeps the ulterior motives alive as we discussed earlier. Unlike the Forex market where automated systems can be exercised such as Expert Advisers (EA’s) in the MT4, most of the trades in binary options are done manually, Why is this important? EA’s are not subject to immoral motivations.

The Race to Witch Mountain

Binary options traders are perfectly aware of ZuluTrade’s ranking system and we will display how the system is currently abused by those traders. We are going to take the top trader from the list as our first example. 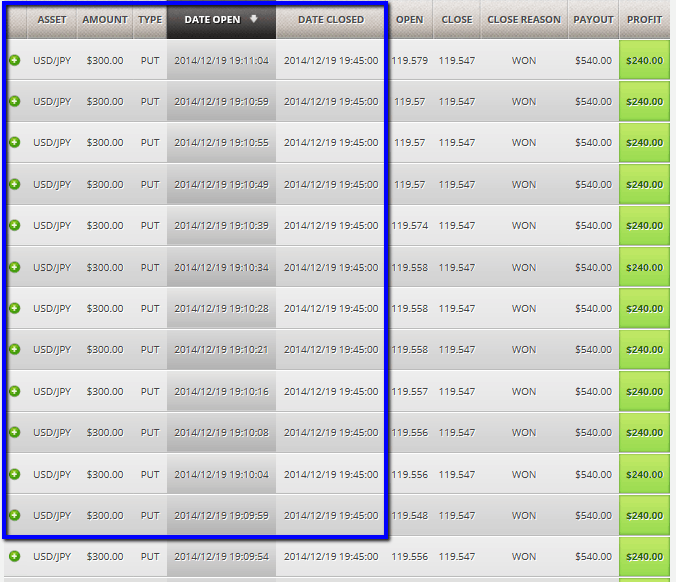 Although we cannot display the entire history here, in just four minutes 25 binary options were executed in USDJPY with an identical expiration. That’s approximately one trade every 10 seconds. This is not an automated software otherwise the trades would have been executed roughly at the same time.

We can also conclude that this is a demo account as no sane trader will execute 24 trades of $300 each in just four minutes on the same instrument. From 15 December to the 19 December more than 3,000 binary options were executed. When the trader believed he has discovered the trend countless amount of the trades were executed in the same direction.

The trader was successful and most of the trades and  is currently number one in ZuluTrade in the binary options category. The most astonishing part is that the trader has over 90 followers at the time of this writing. These are not followers that placed their investments on the trader but simply observing from the side.

As we have elaborated in our binary options trading guide, as there is no market to process the trades to, a market-making environment is created. If the signal provider is compensated through the trading volumes and no commission is charged for following binary options traders as opposed to forex traders, we wonder what will happen if the signal provider is successful over a long period of time.

The binary options brokers may incur a loss in light of the success, which may result in brokers disengaging their partnership with ZuluTrade.  To simplify, if the signal providers are successful it is unlikely to be tolerated by the brokers and the whole program may be terminated.

However, if the signal providers are unsuccessful over a long period of time, binary options brokers may benefit from the generated losses and ZuluTrade’s program is likely to post a great success.To clarify, in the spot Forex market the positions can be processed into the market. After understanding the concept of social trading in the binary options market, we ask, will it be a success?

You may review our past analysis, trading strategies and market education content to assess our proficiency in the field. We hope you have enjoyed our binary options social trading review on ZuluTrade. We will continue to provide objective reviews on the leading  firms in the financial industry.