USDJPY, Will the Uptrend Continue?

Since the Bank of Japan (BOJ) boosted its Quantitative Easing (QE) operations, USDJPY was catapulted into fresh high’s along with a basket of currencies that are trading against the Japanese yen. If you are still holding a long position in Dollar-yen or are considering to enter the market, we have conducted an in-depth analysis to determine the future trend of the currency pair.

From a fundamental angle, it is essential to remember that as long as the QE is operational the Japanese yen (JPY) may continue to weaken. However, there are several events that may negate the bullish outlook of many analysts for USDJPY.  The first one is global instability or risk aversion to simplify. One example of global instability is an economic slowdown from one of the biggest economies in the world, China.

If the Chinese economy continues to contract it will increase the risk aversion in the Forex market, leading to a strong JPY across the board. The other possibility is a natural disaster such as an earthquake. Japan’s region is prone to earthquakes due to its geographic location. If you observe Japan Meteorological Agency reports you will notice earthquakes occur on a daily basis. If an intense earthquake is recorded (over 7.0 magnitude on the Richter scale) that could jeopardise the nuclear facilities,  the Japanese will benefit from safe-haven flows.

The other trigger for USDJPY technical retracement is the Bank of Korea (BOK), South Korea central bank. In the BOK recent monetary policy meeting, the bank left the interest rate at 2.00% after slashing rates in October. The BOK governor, Lee Ju-yeol stated that cutting rates is not the desired approach for dealing with the weak Japanese yen. We are uncertain a stimulus will be conjured by South Korea, which leads us to believe a direct FX intervention, similar to the Reserve Bank of New Zealand (RBNZ) intervention in FX markets is a possible  solution for dealing with Japan’s QE effects on the Japanese yen. The BOK may decide to conduct a stealth intervention or call an emergency meeting in which the intervention would be announced,

The other scenario would come from the United States. The fed is well aware that a weak US Dollar (USD) will maintain progress of the US economy’s recovery. The leading indices such as the SP500 or DJ30 were “artificially” boosted, the US economic figures still have a long path to a full recovery.

When US indicators will suggest a slowdown, particularly in the exports, the Fed may entertain how to devalue the US Dollar without a direct intervention. The most likely possibility is verbal threats to restart the QE program that ended in October. If and when such a scenario materializes  we will provide a lengthy research on the matter.

To determine our medium-term projection for USDJPY we are using the monthly and the weekly chart. We will begin with the monthly chart. 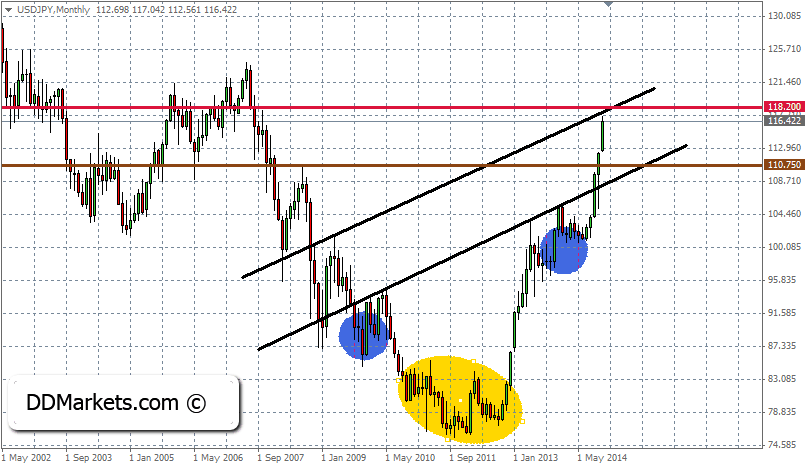 USDJPY technical reversal (bullish) began at the beginning of 2013. The gains shifted a gear following the reversed Head-And-Shoulders (H&S, marked in yellow), where a technical signal was provided when the price breached above the diagonal neckline of the reversal pattern.

This was noticed by many technical traders at the time, leading many to realize hefty profits from Dollar-yen bullish uptrend including the famed George Soros.  The gains were halted at the initial resistance (lower black line), which lead to the birth of a second reversed H&S (shoulders are highlighted in blue). When the resistance (the second H&S neckline) was breached USDJPY extended its gains. As we mentioned earlier, it was due to the BOJ decision to boost its QE operations.

USDJPY current price is within a close proximity to the next resistance level (upper black line). The price has tested the secondary resistance in November 2008 and April 2009. If USDJPY retests the resistance and is unable to break above, we would expect a technical retracement to take place, similar to retracement that occurred in January 2014.

For our trading strategy, we forecast a deeper correction that may take the price to 100.75 where a possible support nay contain any further weakness in the currency pair. To conclude, the monthly chart does not suggest further gains in USDJPY unless the resistance is taken out by the market. We will proceed to the weekly chart. 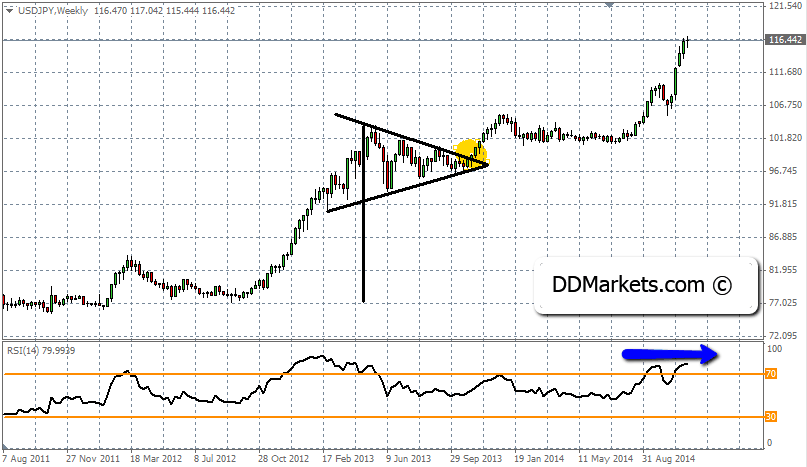 The gains erupted in USDJPY weekly chart following the confirmed bullish flag. When the price affirmed the continuation pattern (highlighted in yellow), the gains continued for several sessions until the price was held into a tight range. The vertical black line represents the flag pole, which according to our calculations should drive USDJPY towards approximately 125.40.

However, we have also noted the negative divergence that is developing in the Relative Strength Index (RSI).  This leads us to suspect a possible correction is due within the next 30 days (four sessions).

This is inline with our monthly projection for USDJPY where a retracement is a strong possibility. We have failed to unearth a technical signal on the weekly chart, the negative divergence acts as a warning sign to all market bulls. An entry may be provided on the weekly chart at the weekly close or even on the daily chart. At the time of this writing we do not have entry on either time frame. You may read the latest market research on the homepage.

To conclude our technical analysis, USDJPY is due for a strong retracement but may not negate the long-term uptrend for the pair. the trading strategy would be to patiently wait for an entry in order to capitalize over the expected weakness. You may subscribe to be notified when  we believe an entry is provided and to be instantly updated on our future market updates.

25/11/14 UPDATE: We have used the above analysis to execute multiple trades in our weekly trading strategies.

01/12/14 UPDATE: A short trade in USDJPY has been executed. The full details are available in our weekly market update.