As it became clear Donald Trump will serve as the New US President the Mexican Peso (MXN) was heavily sold following Trump’s remarks to the building a wall at the boarder with Mexcio throughout the elections’ campaigns. USDMXN spiked from its lows at 18.3130 to a high of 21.3912 before retracing lower. Many forex traders turned to the Mexican Peso to attempt a short trade in USDMXN, after all, a healthy retracement is often the case following such extraordinary gains. There has been reports Mexico central bank may hike rates or aggressively intervene in the Forex market to contain to tumble of the Mexican Peso. Unfortunately, Donald Trump will only begin his Presidency in January. 2017, which leaves the market with approximately 60 days of uncertainty. 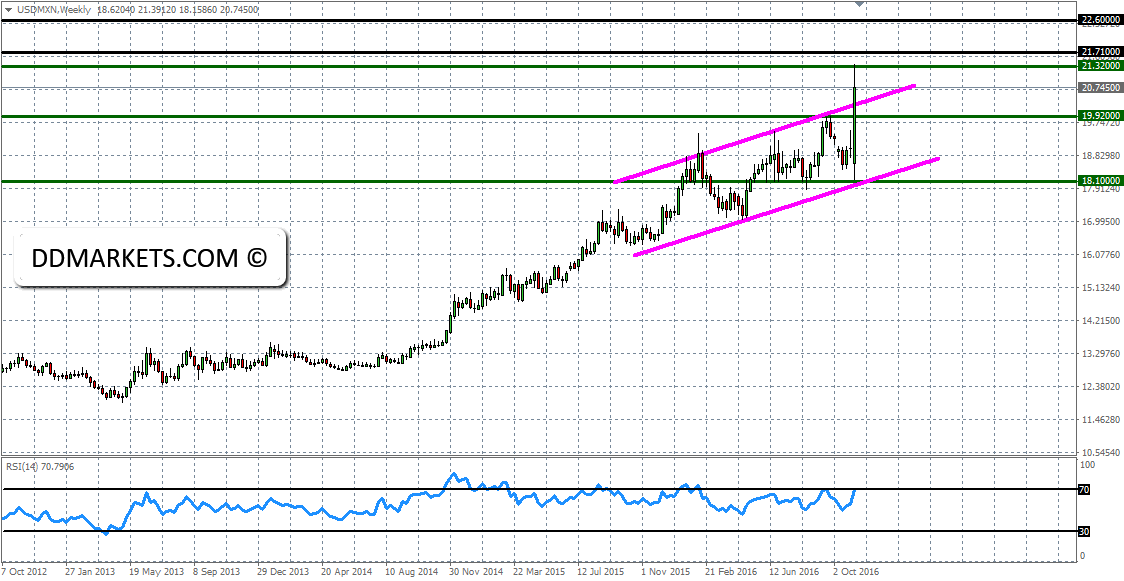 USDMXN may have a affirmed a classic bullish breakout entry based on the weekly chart. The difference between USDMXN and our prior outlook for USDTRY following the attempted coup is that the technical indicators are suggesting a retracement is likely to take place but not necessarily at current levels. Rates hikes or an attempted intervention by Mexico central bank is unlikely to last but may provide a short-lived spike in MXN pairs and crosses. Initiating a long trade in USDMXN is not possible until the price re-tests the key price levels that are highlighted on the chart. If the price does retrace lower prior to any official announcements from Mexico central bank we will re-assess USDMXN and determine whether a long trade should be initiated. What we are anticipating is another leg higher in USDMXN before corrective weakness takes place, which would then provide a technical long entry. The Fed’s monetary policy decision in December is likely to play a role in the future of USDMXN. A rate hike may very well sustain the uptrend while a decision to remain hold could provide the technical dip to long the cross.

They technical levels that may provide a short entry in the USDMXN range between 21.7100 to 22.6000. It is a wide range but given the recent volatility the range is fairly limited. Holding a long trade in USDMXN does incur in negative swap at the rollover, which is why we are more keen on a short trade rather than a long trade, however, our decision will be made based on technical analysis in the chart we presented. We will continue updating our projections for the Mexican peso in this page in accordance to the latest market events.

As USDMXN outlook has acheived its objective the technical projection is now accessible to all traders.

USDMXN Projections Following the US Elections was last modified: May 18th, 2017 by Digital Derivatives Markets